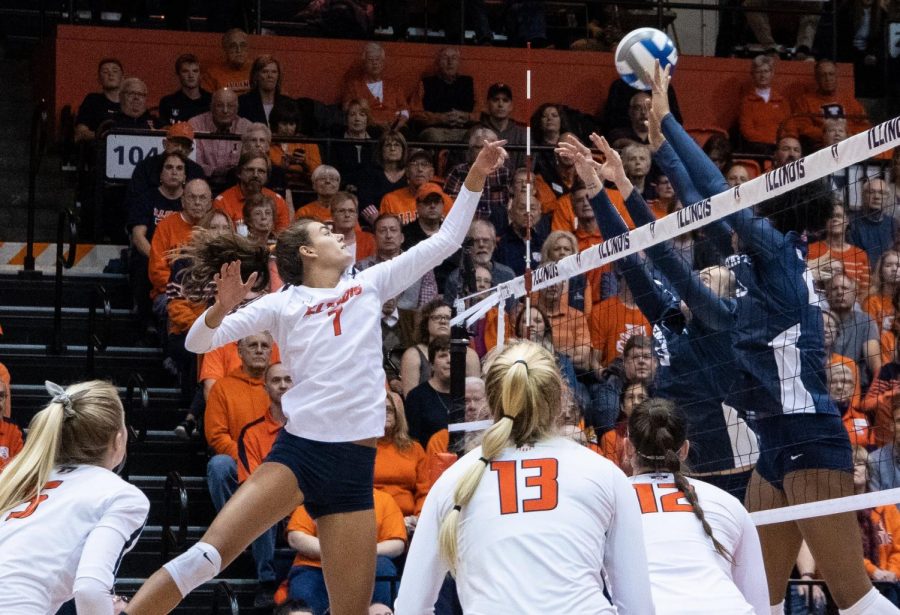 The first time Illinois and Penn State faced each other was back on Oct. 23 at University Park. Illinois went up two sets to zero on Penn State but saw their lead taken away as Penn State won the last three sets.

The Nittany Lions’ defense did not allow the Illini to win a single set when they played on Friday, putting up 11 blocks and holding Illinois to a .081 hitting percentage in three sets.

“They’re an excellent defensive team,” said head coach Chris Tamas. “When your touch is a little bit off or you’re not always in system, it’s tough to score against teams that play great defense. That goes with anything out there. So, I felt like they had an excellent defensive match and we just struggled to put the ball on the floor. I thought we played a little bit tight tonight, which doesn’t help your cause when you’re doing those things.”

Not only did the Nittany Lions play great defense against the Illini, they were also very efficient with their attacks. As a team, Penn State got 42 kills with only nine errors on a .308 hitting percentage. In comparison, Illinois got only 33 kills with 24 errors.

Penn State was led in kills by setter Jonni Parker, who had 12 kills with no errors on a .462 hitting percentage.

Against Rutgers, the Illini showed out on defense and on the serve, earning seven blocks on the match and scoring nine service aces in the three sets they played.

Serving has been a focal point for Tamas during his three seasons at Illinois, and the team showed how valuable it could be against Rutgers. Senior outside hitter Jaqueline Quade had three aces in a row in the first set and senior middle blocker Ashlyn Fleming contributed four in a row in the second. In addition to her four aces, Fleming also got four blocks and six kills on an efficient .455 hitting percentage.

Quade talked about what the team looked for from the service line.

“Just to put a lot of pressure on (Rutgers),” Quade said. “Just kind of putting a constant pressure on any team we play, just (because)if we get an ace that’s great, but also tough serving usually helps with good results as far as what we’re getting back on our side of the net. I feel like against teams like this, we know we can kind of use that skill we have against them pretty well.”

Illinois also benefited from its even attack, as Quade and outside hitter Megan Cooney were tied for the team high in kills against Rutgers at 14 on a .400 and .333 hitting percentage respectively.