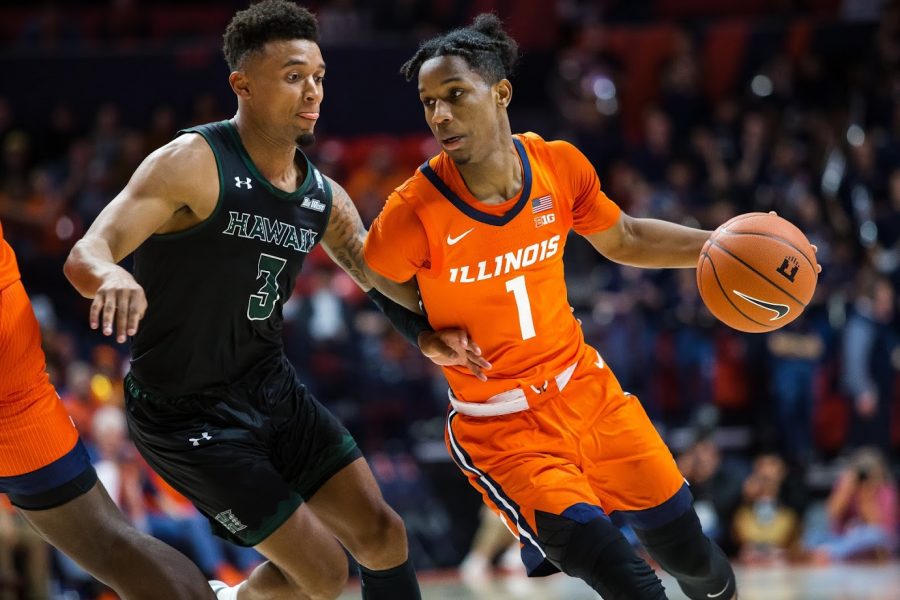 Trent Frazier drives past a Hawaii defender at the Illini's game vs Hawaii at the State Farm Center on Monday.

In a season that could push Illinois men’s basketball past its seven-year NCAA tournament drought, pressure, especially on the veterans, is higher than ever before.

For junior Trent Frazier, the expectations to be a top-scorer for the Illini will always loom over his head. Known for his ability to produce in big moments, whether that be driving through the lane to draw the and-1 or knocking down a tight corner-three, Frazier is a natural scorer.

“Trent had a reputation and still does of being an elite scorer,” said head coach Brad Underwood. “He’s very gifted, but what gets lost is Trent’s basketball IQ, his feel.”

That elite talent produced an average of 13.7 points per game last season. Frazier’s scoring efforts fell just behind sophomore Ayo Dosunmu, who led the Illini with 13.8 points per game in his freshman season.

What’s harder to measure and can get lost in his crunch-time shots or his rare speed, is Frazier’s defensive growth. As one of the three shortest players for Illinois, standing at 6-foot-2, Frazier is often physically outmatched but is almost always assigned the opponent’s top shooter.

Prior to his meeting with Frazier, Stansberry averaged 20 points per game and a 53.4 three-point shooting percentage. The senior guard had a career-best 28 points on six three-pointers against Portland State, just three days prior to Hawaii’s trip to Champaign.

“For a team that runs a ton of actions and they run a lot of reverse actions, floppy actions off the baseline to get Stansberry shots and he (Frazier) was right there every step of the way,” Underwood said. “He made his looks very tough tonight, and that’s what it takes to really hold down a great offensive player.”

Frazier ended the night against Hawaii with more points than Stansberry, scoring 13 and going 2-for-3 from three-point range. While Frazier’s offensive production hasn’t been as consistent as past seasons, neither he nor Underwood finds it too concerning.

Being a constant force on the defensive end is more important to Frazier than his shooting percentage, which currently stands at 36.7% compared to his 41.1% last season.

Possessing that confident veteran mentality, Frazier knows he can only control so much on the court. The shots will start to fall eventually. What he can control is his physicality, his attitude, his ball control and of course, his on-ball defense.

“He is unbelievable in a scouting report, maybe as good as anybody we have at knowing not only what he’s supposed to do but what everyone’s supposed to do,” Underwood said. “We quiz our guys on scouting reports, and Trent’s never wrong. He’s got that knack to see it before it happens, and that’s allotted him to become elite defensively. He’s become stronger, and now he’s figured out how to use his speed to help.”

Along with his natural basketball IQ, Frazier has impressed Underwood with his ability to work against screens, which Underwood calls an “impressive skill.” Locking in on man-to-man defense and avoiding switching on the screens has allowed Frazier to create deeper pressure.

Underwood and the Illini will continue to rave about Frazier’s development and skill on defense, but he sees it as just doing his job.

In the Illini’s season-opening victory against Nicholls State on Nov. 5, Frazier was held scoreless until the last 30 seconds of regulation when he hit two free throws to send the game into overtime.

While he went 0-for-9 in the game, Frazier drew three charges and forced multiple turnovers near the end of regulation and during the overtime period.

While it’s hard to think the Illini would’ve pulled out the victory without Frazier’s persistent efforts, he said he was just doing his job. Instead of letting those pressures to be a leading scorer affect the rest of his game, Frazier found different ways to impact his team.

Whatever the Illini need to pull out a victory, Frazier is always up for the challenge.

“I just do what coaches tell me to do,” Frazier said. “Coach says run him off the line, I try to do that. Contest the shots every time, I do that. The biggest thing for me in my third year, it starts on the defensive end. I try to bring that energy for these guys. Communicating, getting stops every time we’re down on the floor on defense. That’s what it is, just playing hard every possession.”