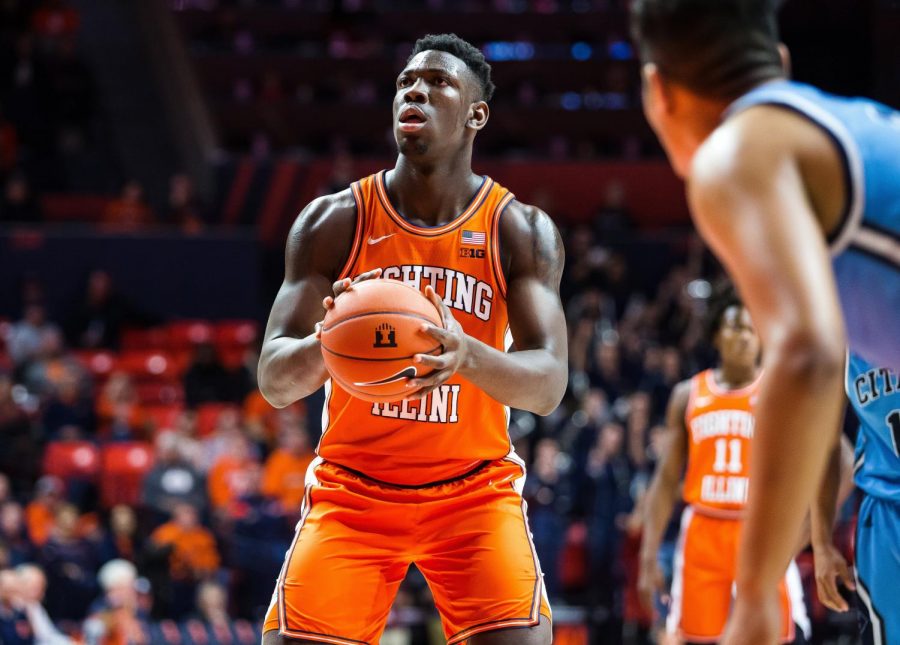 Freshman center Kofi Cockburn shoots a free-throw at the line during Illinois' game against the Citadel at the State Farm Center Nov. 20. Cockburn's fourth double-double in five games helped lead the Illini past the Bulldogs 85-57 on Wednesday night. Captured at State Farm Center on 20 Nov, 2019 by Jonathan Bonaguro.

Cockburn recorded 10 rebounds in the first 10:34 of the game and finished the half with eight points and 11 boards, aiding Illinois in its 34-20 lead at the half. The Illini held the Bulldogs to 19 percent shooting in the first, as they went 7-of-36 from the field.

The Citadel was fresh off a Tuesday night win in Missouri and were down the team’s best shooter. Although the bulldogs played tough in the first half, the fatigue set in during the second.

“I have a lot of respect for Citadel,” said sophomore forward Giorgi Bezhanishvili. “They played last night, a really hard game. Their captain, one of the best players got injured and they still came out playing hard against us, so a lot of respect to those guys.”

The Illini scored 51 points in the second half while holding the Bulldogs to 37.

Illinois had four of its leading scorers and eight of its top-nine scorers from last season. The Illini are returning 2,045 of the 2,398 points scored during the 2018-19 campaign, putting the Citadel at a disadvantage in their first Illinois matchup in program history.

“I like the shots we were getting,” said head coach Brad Underwood. “We missed four or five bunnies and a few little lay-ups, but we got some clean looks at threes.”

In just 24 minutes of play, Cockburn’s 17 rebounds broke a single-game, school record for a freshman, previously held by Deon Thomas since 1990 at 16. Thomas’ record was tied in 1999 by Damir Krupalija.

The 7-foot freshman is the third power conference player this season to have 17-plus points and 17-plus rebounds in a game.

“I don’t set a lot of expectations, especially for freshmen,” Underwood said. “I would probably say he’s been really good. I expected him to be a good player and contributor because I had seen him play so many times over the years. I have been really really impressed with how coachable he is and how adaptative he is to playing the college game.”

Sophomore guard Ayo Dosunmu and Bezhanishvili had 16 points each for Illinois with Bezhanishvili just one rebound away from a double-double of his own.

Illinois moves to 4-1 on the season and continues its five-game homestead before opening Big Ten play at Maryland on Dec. 7.