Illini to face Hawkeyes after 63-0 shutout 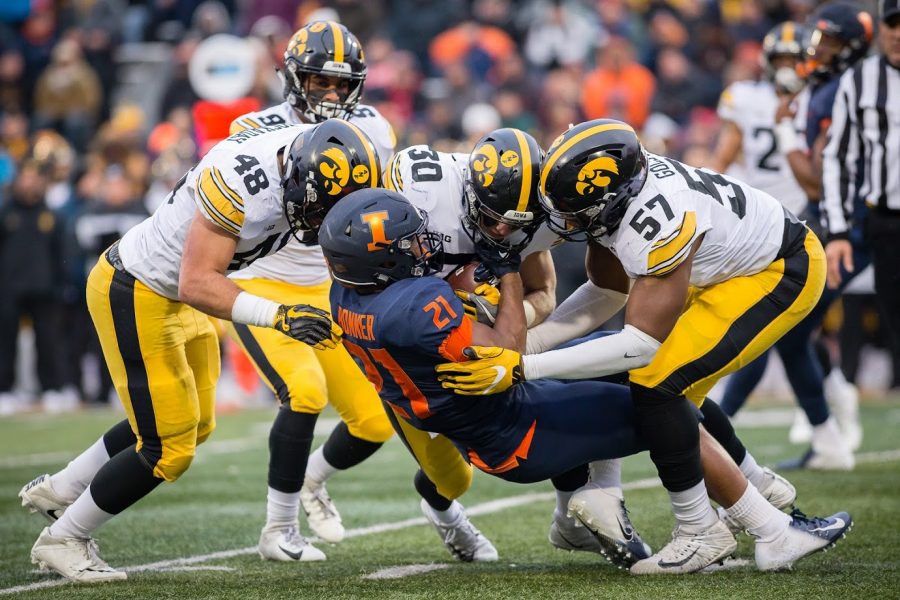 Illinois running back Ra’Von Bonner is tackled during Illinois’ game against Iowa at Memorial Stadium on Nov. 17, 2018. The Illini will face the Hawkeyes Saturday after their 63-0 loss last year.

Rewind the clock to just over a year ago. November football in Illinois was nothing short of abysmal. This time last year, Illinois was devastated at Memorial Stadium in their most embarrassing loss in recent memory by way of 63 unanswered points to the University of Iowa.

But the winds of change approached and turned the direction of this team a full 180 degrees, as Illinois clinched a bowl game with an incredible 25-point comeback against Michigan State before enjoying a week off of football. Now having won four straight games, the Illini look to make it five in a revenge match against the Hawkeyes this Saturday at Kinnick Stadium.

“We realize where we are as a program,” said head coach Lovie Smith. “We realize how big a game this is. Each week they get a little bit bigger, and that’s exactly where we want to be in November. We’re anxious to play this game after being embarrassed on our home turf last year. Iowa’s a good football team, so it’ll be a big challenge for us. But we accept it.”

No. 19-ranked Iowa enters Saturday’s game after handing No. 8-ranked Minnesota its first loss of the season, snapping an 11-game win streak that started after a 24-14 loss against Northwestern last season.

While the Hawkeyes finished with 141 fewer yards than the Golden Gophers, the Gophers’ freshman kicker missed a field goal and an extra point, ultimately being the difference-maker in a four-point, 23-19 win. Senior quarterback Nate Stanley threw for 173 yards, also throwing two touchdown passes and extending a final, game-deciding field goal drive.

Defensively, Iowa dominated in the pass rush with six sacks led by defensive end A.J. Epenesa, whose final sack of the evening put the Gophers in a third-and-21 situation that they’d fail to overcome.

“Iowa is a team that plays hard all sixty minutes,” Smith said. “They jumped out to a big lead, and of course, Minnesota, having the type of year they’ve had, really came back and made it a classic Big Ten football game at the end. Defensively, Iowa played great football. They have been for a long time, and this year is no exception.”

While the Hawkeyes shook up the race for the Big Ten West, the Illini took much needed time off after an emotional roller coaster of wins over the last month. Starting with a homecoming comeback win against Wisconsin, Illinois won at Purdue the following week amidst cold and wet conditions.

Illinois followed those up with two more wins attributed to the strength of the team’s second-half performances, first after leaving a lot to be desired against Rutgers and dropping behind 28-10 against Michigan State.

Capped off by a touchdown pass inside from quarterback Brandon Peters to Daniel Barker, the Illini completed the largest comeback in school history. Peters threw for a career-best 369 yards, and threw for three touchdowns, while Josh Imatorbhebhe had four momentum-swinging catches.

On the defensive side, the Illini benefited handsomely from three intercepted passes, one of which was a pick-six by Sydney Brown, and seven tackles for loss in spite of the absences of Jake Hansen, Oluwole Betiku and Milo Eifler.

“We like the position we’re in,” Smith said. “Life is a lot better when you’re winning football games and accomplishing more than you have in the past. Seeing the program heading in the right direction has us all in better spirits leading up to game week.”

In the 63-0 win against Illinois last year, Iowa scored nine touchdowns in a variety of ways. Four came off the rush, three off the pass, one on a fumble return and another on a punt return, all unanswered.

There were hardly any positives to take away from Illinois in 2018 outside of Ra’Von Bonner’s 96 yards off of 21 carries, as nearly all facets of the Illini’s game plan that afternoon came up woefully short.

But, this matchup comes at a perfect time for both teams. After handing the Gophers their first loss of the season, the Hawkeyes have shaken up the Big Ten West and are currently battling with the Badgers for the second seed in the conference. The Illini, on the other hand, are coming from a week off of their best stretch of football and their first bowl-clinching win in the Lovie Smith era, having the chance to make their turnaround come completely full circle on the road at Iowa.

“It’s tough in general to win on the road,” Smith said. “I think it also helps when you’ve done it before. Going to Purdue was tough, of course, Michigan State was a tough place, and now we’re going to another tough place. Good football teams have to be able to go to tough places and win, and I think we’re equipped to do that.”