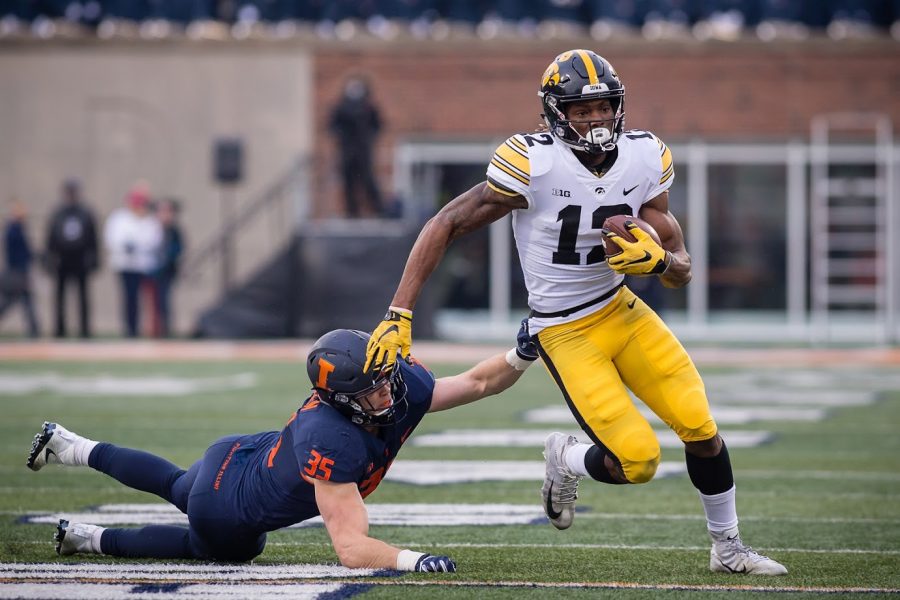 Illinois linebacker Jake Hansen misses a tackle on Iowa wide receiver Brandon Smith during Illinois’ game against Iowa at Memorial Stadium on Nov. 17, 2018. Last year, the Illini lost to the Hawkeyes in a 63-0 shutout, tying the school’s largest margin of defeat in history.

Mention the number “63” around the Illinois football team, especially this week, and a painful memory rears its head.

No, it’s not referring to the jersey number of bruising offensive tackle Alex Palczewski, although the junior has molded himself into an upper echelon offensive lineman in the conference. It represents the number of unanswered points Iowa put up last season on Nov. 17, 2018, at Memorial Stadium — a 63-0 shutout, tying for the largest margin of defeat in school history.

The result alarmed those around Illinois football and fans of college football nationally, as Illinois looked hopeless while an Iowa team known for its tough defense and conservative offense exploded for the largest victory in Kirk Ferentz’s 21-year coaching career.

While some felt the result might put the nail in the coffin for Illinois head coach Lovie Smith’s tenure, the program has drastically turned around during the calendar year, in more than one way following Iowa’s shutout victory.

Smith signed his highest-rated recruiting class at Illinois in February, the program opened the Henry Dale and Betty Smith Football Center in August and, just a week ago, the Illini secured the first bowl berth of the Smith era.

Despite the budding rebuild, Smith hasn’t forgotten the sour taste the 63-0 loss left, and he won’t let his players either.

“The 63-0 thrashing out (in Memorial Stadium), are we gonna bring that up?” Smith said. “Yeah, a few times, I think the guys have heard that a few times. There’s a lot of us that went through it, (and) when you play that way, you just hope you get an opportunity to play better.”

Coming into Saturday, the Illini are better. There are numerous players in the fold this season who didn’t see action — and some who weren’t a part of the program yet — on that fateful Saturday one year ago.

Junior quarterback Brandon Peters, coming off of his best game as an Illini, throwing for 369 yards and three touchdowns in the 37-34 victory at Michigan State, was on the sidelines at Michigan, while Illinois’ two current top receivers were also missing from the game.

Josh Imatorbhebhe was still at the University of Southern California, while Donny Navarro, who was awarded a scholarship last week, was a walk-on transfer from Valparaiso sitting out his mandatory one year.

Despite not being anywhere remotely near the drubbing, receiver Imatorbhebhe feels the hunger for the redemption of his teammates who were.

“We’ve been talking about it a lot in the receiving room, on the offense and really on the team, the fact that we felt so disrespected,” Imatorbhebhe said. “Now that we have the momentum, we feel like we have something to bring to this fight. That definitely is an extra incentive to go out and win.”

The junior is also coming off a career day at Michigan State like Peters, finishing with 178 yards and two receiving touchdowns.

Rising through the ranks due to injuries and hard work, Navarro is now in a position to play a major role in Saturday’s outcome, something he wasn’t afforded last season.

“We’re in a whole different situation right now,” Navarro said. “The way guys are feeling in the locker room is way different (than last season after the Iowa game).”

Looking at the main contributors for Iowa last season, there are major impact players who’ve departed, but a lot of talent still remains. Gone are tight ends Noah Fant and T.J. Hockenson, who combined for three receiving touchdowns in the blowout; they were selected in the first round of the 2019 NFL draft, which is uncommon for a tight end, much less two from the same school. Giving up big gains over the middle, where tight ends usually roam, has been an Achilles heel for the Illini defense this season, making the loss of both players a plus for Illinois.

However, quarterback Nate Stanley and defensive end A.J. Epenesa remain. Stanley threw for three touchdowns in the 63-0 victory, while Epenesa, an Illinois native and likely top-15 2020 draft pick, returned a fumble for a touchdown.

Mekhi Sargent and Toren Young also ripped Illinois on the ground for two rushing touchdowns each, and both players return for the Hawkeyes.

While Illinois isn’t at Iowa’s level yet in terms of talent or program stability, it’s a lot closer than it was a year ago. The Illini have done their best to improve after the curb stomp the Hawkeyes handed them last year, but they haven’t forgotten the pain and are using it as motivation heading toward Saturday in Iowa City.

“It speaks for itself,” said offensive coordinator Rod Smith. “That’s a nightmare you wanna forget, like a bad trainwreck, but you can’t, it keeps going over and over in your mind. I’m not about revenge. I’m more about execution. I’m more about us playing a better brand of ball Saturday.”