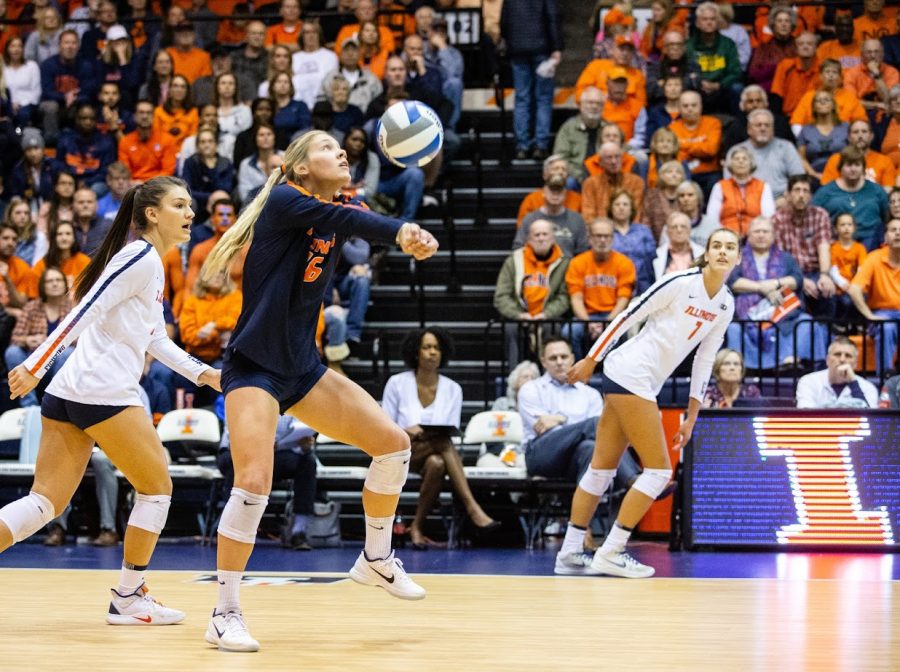 Morgan O’ Brien (middle) sets up Jacqueline Quade (left) for a spike during Illinois’ game against No. 8 Penn State at Huff Hall on Friday. The Illinois volleyball team will play at Maryland on Friday and Ohio State on Sunday.

Illinois bounced back on Saturday after getting swept by No. 8 Penn State last Friday, defeating Rutgers in straight sets.

Head coach Chris Tamas said O’Brien has been an asset to the Illini defense all season.

“We want to kind of funnel the balls to her,” Tamas said. “We want her to play defense on a lot of balls. But she’s also a very consistent passer and a court leader and everything else … We talked a lot about the team game, and she’s a big part of the team.”

This will be the first and only time Illinois will face Maryland in the regular season. The biggest offensive scorer from Maryland is junior outside hitter Erika Pritchard, who averages 3.36 kills-per-set.

Tamas talked about the benefits of having players like Pritchard and Myers for the Illini.

“We always prep for a team in its totality, and Maryland is a quality team just as Ohio State is,” Tamas said. “I always say it’s a luxury of our conference is that we have to be prepared to play every single day.”

After Maryland, the team will head to Columbus, Ohio, to play Ohio State for the second time this season. The first match ended with a sweep for Illinois behind 13 kills by senior Jacqueline Quade and three blocks for freshman Kennedy Collins.

Since the first match, however, Ohio State added a noteworthy win to its season. Ohio State defeated then-No. 4-ranked Wisconsin in four sets, just two weeks after losing to Illinois.

“Everyone improves at a different time of the year, and everyone plays good volleyball against certain teams,” Tamas said. “It’s more about just being prepared for every single opponent that we have, and a couple of weeks ago Ohio State was prepared for Wisconsin. Everyone is going to make changes as the weeks go on, and we just have to keep making those changes and making sure that we’re prepared for Ohio State.”