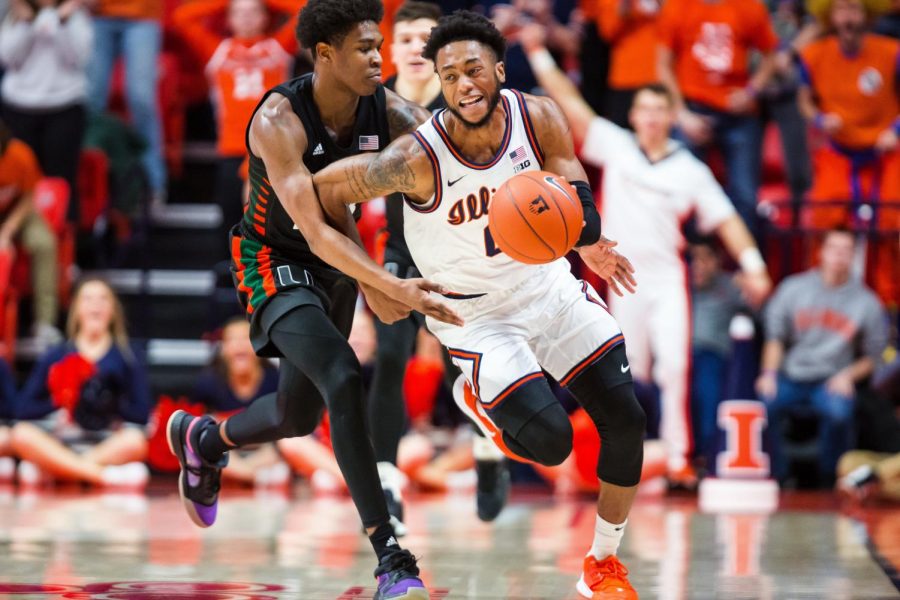 Sophomore guard Alan Griffin dribbles past a Miami player during the Illinis' game against the Hurricanes Monday night in the ACC/Big Ten Challenge. Illinois narrowly lost 81-79, and moves to 6-2 on the season overall. Captured at State Farm Center on 02 Dec. 2019 by Jonathan Bonaguro.

Illinois men’s basketball battled back from a 27-point deficit against Miami on Monday night, only to fall by two points, 81-79. The Illini (6-2) hosted the Hurricanes (5-3) in the ACC/Big Ten Challenge hoping to end their give-game homestand on a win; instead, Illinois was dismantled by Miami’s Chris Lykes who scored 28 points, tying his career-high.

“This is on me,” said head coach Brad Underwood. “I did a very poor job of getting our guys ready and that can’t happen, there’s no excuse for that. You saw what a little fight does in the second half. I’m really proud of the fight down 27 and to have the ball with a chance to win the game. I’m extremely proud of that competitive spirit.”

Illinois held the lead through the first minute and a half, but the recurring issue of turnovers, seven within the first 12 minutes, allowed Miami to control the remainder of the game. The Illini had six more turnovers in the next 28 minutes.

Miami didn’t give Illinois room for error in the first half, shooting 66.7% from the field and 50% from three-point range. Lykes led the attack, shooting 78 percent through the first 20 minutes.

“We started slow on the defensive side,” said senior Andrèz Feliz. “They were hitting shots and we were fighting to contain them, but our defense was really low. That’s not usual for us.”

Illinois shot 44% from the field in the first half, but never found enough rhythm to string together a run. Underwood said the team’s shootaround prior to the game was “as poor a shootaround (Monday) as we’ve had in my time here.” Underwood added the Illini had a few poor practices leading up to Miami.

The second half started in a similar fashion, but the Illini were able to permanently break the Hurricane’s double-digit lead with seven minutes left in the game.

Illinois continued to shrink the deficit and Dosunmu’s four-consecutive points brought Miami’s lead down to five with 2:16 left to play. A pair of free throws by junior Trent Frazier followed by a layup from Feliz created a one-point game with 46 seconds left.

After a missed layup from Lykes at the opposite end, Dosunmu attempted to take lead with a drive to the basket but was called for a charge with 2.7 seconds left. Lykes was able to secure the upset with a made free throw.

“Our effort was more of an issue than anything we could do x’s and o’s wise,” Underwood said. “You address that and it’s great to see we have a locker room full of guys with pride. And they fought, can’t ask for anything more. Had we been able to finish off the last play, then we’re talking about the biggest comeback in school history, but we’re not. And Miami deserves the credit for that.”

The near-comeback was led by freshman Kofi Cockburn who had 23 points, scoring in the double-digits for the seventh time this season.

Illinois will continue to face tough challenges, traveling to No. 3 Maryland on Saturday then hosting No. 4 Michigan on Dec. 11.