Illinois v. Northwestern game notes: A game to forget with grades to reflect 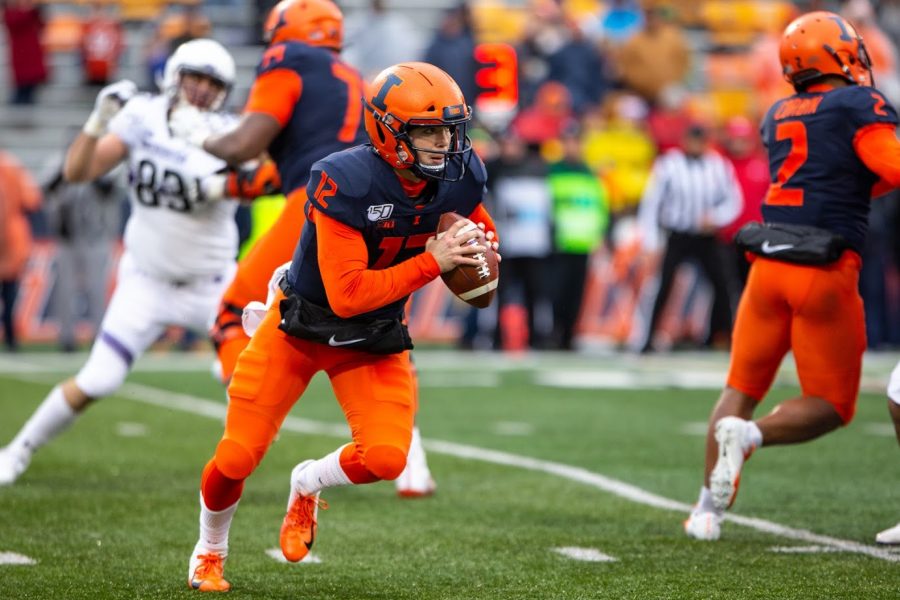 Illinois ended the season with its second-straight loss, falling to Northwestern. The Wildcats took control of the clock on a rainy Saturday afternoon, snapping an eight-game losing streak against Big Ten opponents. The Illini struggled to establish their offensive game with quarterback Brandon Peters and all three starting wide receivers out with injuries, while the Wildcats ran amok in Memorial Stadium, finishing with a total 378 rushing yards.

First, the good. Freshman quarterback Matt Robinson threw for 108 yards, completing eight of his 17 attempts, including a 29-yard reception by wide receiver Caleb Reams that set up a touchdown drive from running back Dre Brown in the second quarter, but that was the most productive sequence the Illini had all afternoon.

Now, the bad. The Illini missed both Peters and Josh Imatorbhebhe offensively. Robinson was sacked three times for a total of 33 yards lost. The Illini struggled to advance their drives on the ground, rushing for 60 yards but losing 46, netting a dismal 14 yards on 26 carries.

“They did a pretty good job stopping us on the run,” Robinson said. “We’ve just got to look at the film, see what we did wrong and go from there.”

Illinois’ passing game started to pick up in the second quarter, but it only resulted in a long field goal from kicker James McCourt. In the total 60 minutes, the Illini held on to the ball for just 18 minutes and 12 seconds.

The Illini now wait for their bowl invitation on Dec. 8. The bowl bid makes this season a success, but this game brought this offense down to earth.

“We just weren’t doing our best job,” Robinson said. “I don’t think I did my best job. The entire offense didn’t feel on point. We didn’t execute.”

The Wildcats, quite literally, had all day to score. Of all the glaring stats that could be pulled from Saturday afternoon, the most critical in favor of the Wildcats was their time in possession of the ball. Of those 60 minutes, the Illini defense was on the field for almost three full quarters.

Cornerback Nate Hobbs’ interception in the second quarter set up the offense’s lone touchdown drive. Linebacker Dele Harding led the defense with 15 tackles and a tackle for loss, tying him for 10th on Illinois’ all-time list with 147 and the most since linebacker Jeremy Leman (152 by 2006). Defensive back Stanley Green had his 10th career forced fumble, placing him third for the most fumbles in Illini history.

Like the offense, the Illini defense missed linebacker Jake Hansen, who sat his third straight game due to injury. Overworked and worn down on the defensive end, the Wildcats’ fourth starting quarterback of the season Andrew Marty took severe advantage in the zone-read option game (30 rushes for 111 yards), threw a 34-yard touchdown pass and scored his touchdown run after defensive back Coco Azema’s 62-yard carry late in the third quarter.

“It’s our last game at Memorial Stadium, but this isn’t our last game of the season,” Harding said. “We want to close out with a win so the rest of the team can take that energy off into next year.”