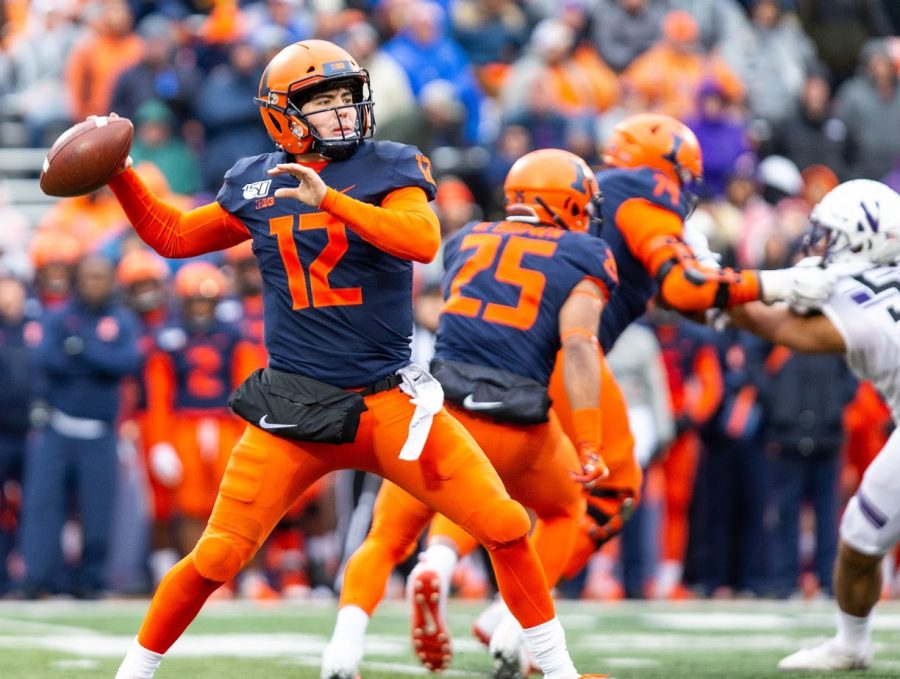 Quarterback Matt Robinson (12) attempts to throw a pass during Illinois’ final regular-season game against Northwestern at Memorial Stadium. The Illini failed to gain offensive momentum and fell to the Wildcats 29-10 on Saturday.

Wet, muggy, ugly – a few words for the weather during Illinois’s 29-10 loss to Northwestern on Saturday.

Heading into the game, Illini starting quarterback Brandon Peters was ruled out with a head injury, forcing redshirt freshman Matt Robinson to get the starting nod.

The Wildcats also turned to an inexperienced signal-caller, as sophomore quarterback Andrew Marty picked up his first start.

With both teams forced to turn to backup quarterbacks, there were more than a few head-scratching plays from both sides, and the slippery conditions served no favors.

The Wildcats opened the scoring on a field goal from kicker Charlie Kuhbander with three minutes remaining in the first quarter, the only scoring in the first 15 minutes of play.

The Illini offense couldn’t get things going early on, and the unit remained stuck in neutral for the remainder of the game.

“I just feel like we never really got into the groove of things,” said senior wide receiver Caleb Reams. “Thirteen plays in the first half is never good.”

In the second quarter, an interception from defensive back  Nate Hobbs set the Illini offense up with a short field, and running back Dre Brown ran for a 6-yard touchdown to put Illinois up 7-3.

Northwestern responded, however, as Marty capped a 15-play, 75-yard drive with a 12-yard rushing touchdown to restore the  lead, 10-7.

Missing the safe hands of Imatorbhebhe made things tough for Robinson, and making plays deep down the field didn’t happen.

“(Imatorbhebhe) is such a playmaker, it makes it harder when you don’t have a guy who you know is gonna make big-time plays,” Robinson said.

After halftime, kicker James McCourt missed a potential game-tying field goal, and Northwestern immediately moved the ball 69 yards on the following drive for another touchdown, culminating in a 34-yard touchdown from Marty to wide receiver Riley Lees.

Although Northwestern wasn’t particularly potent at any given point of the game, Illinois struggled all over the field, partially due to key injuries. But head coach Lovie Smith refused to let the team’s health problems serve as an excuse for the loss.

“We were losing a lot of players, not gonna make excuses for that,” Smith said. “Hopefully we’ll get a lot of those guys back and get back to how we’ve been playing throughout the year.”

Down 17-10, Illinois got back in it when McCourt redeemed himself by clanking the ball through off of the right upright from 50 yards away, cutting the lead to 17-13.

On the Wildcats’ following drive, senior defensive back Stanley Green looked to have secured a critical end zone interception, but an illegal hands-to-the-face penalty on junior defensive lineman Ayo Shogbonyo nullified the play, and Marty snuck in from a yard out to make the score 23-10 two plays later.

The Illini failed to respond, and the Wildcats punctuated the win with a 24-yard touchdown run from defensive back Coco Azema with just over one minute remaining.

“Disappointment doesn’t even seem like a strong (enough) word to describe what we did today,” Smith said. “First off, got to give (head coach) Pat Fitzgerald and Northwestern’s team a lot of credit. They came in and really played well in all phases. It always starts up front, the lines on both sides, and they dominated us both ways.”

Despite missing some key weapons, Robinson was lethargic on Saturday, throwing for 108 yards and accumulating no total touchdowns. The redshirt freshman also took several losses, which drastically skewed his final rushing yardage total.

“I think Matt played the way we all played,” Smith said. “Nobody did a good job today. Matt was involved in that.”

Freshman Isaiah Williams also saw the field as a quarterback but only threw for 38 yards and an interception to go along with 15 yards rushing.

As a whole, Illinois accounted for just 14 total rushing yards. On a day where the weather made it hard to do much in the passing game, Illinois’ rushing attack, normally the team’s strong suit, couldn’t pick the rest of the offense up.

After running for over 1,000 yards in 2018, senior running b ack Reggie Corbin went out on Senior Day with -10 rushing yards.

“I don’t think I did my best job, or the whole offense did,” Robinson said. “We just weren’t really on point.”

Defensively, Illinois completely took away the Northwestern pass attack, but gave up 384 yards on the ground, bringing back shades of last season. Azema led the way with 123 rushing yards, and Marty wasn’t far behind with 111.

Illinois looked like it was turning a corner after the victory at Michigan State, but Saturday’s loss to Northwestern was a big step in the wrong direction and ushered out a group of seniors on a low note.

“It’s mission not complete really,” said linebacker Dele Harding. “Offense, defense, special teams too, it’s not the way we wanted to go out.”

With the loss, Illinois dropped to 6-6 on the season overall, while Northwestern took home the Land of Lincoln Trophy to conclude a 3-9 season.