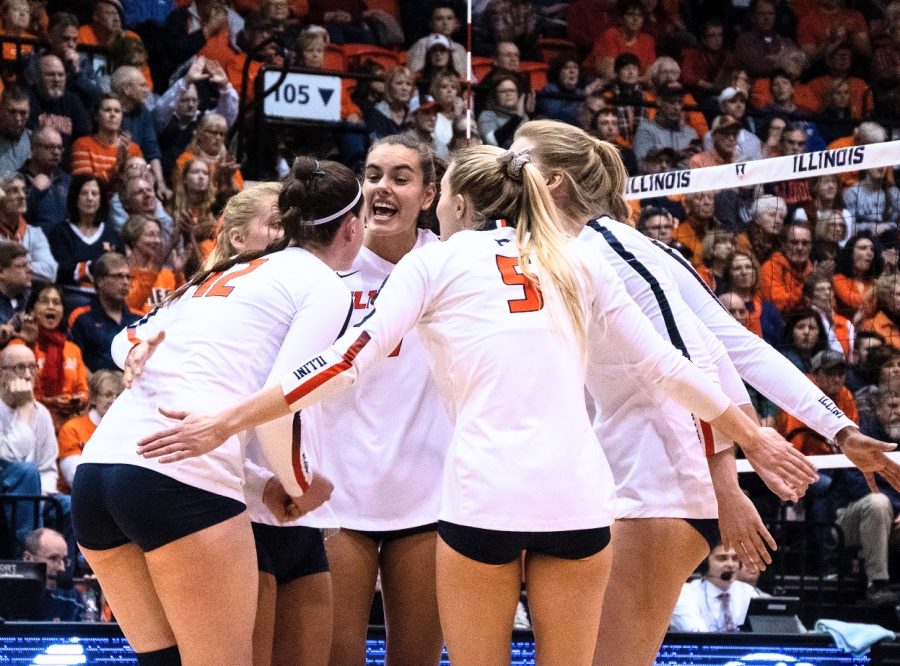 The Illini celebrate after scoring during Illinois’ game against Penn State at Huff Hall on Nov. 16.

Head coach Chris Tamas and the No. 24-ranked Illinois volleyball team secured their third-straight NCAA tournament bid in as many years Sunday.

The Illini will travel to Provo, Utah, to take on the Utah Utes at Brigham Young University’s Smith Fieldhouse in the first round of the tournament on Friday at 5 p.m. The Illini have a 4-1 all-time record against the Utes but lost fell to Utah in their last contest, 3-1, in 2002.

The NCAA postseason appearance marks Illinois’ 26th in program history and 10th in the last 12 seasons. The Illini are 44-25 in all-time postseason play entering this year’s tournament. Last year, Illinois’ appearance in the Final Four and 17-game win streak last season, earning the Illini a No. 3 seed in the tournament.

Host and No. 14-seed BYU will take on New Mexico State following Illinois’ match against Utah. The winner of both matches will play Saturday in the second round. Teams winning two matches this weekend will compete in regionals Dec. 13-14.

Seven other Big Ten teams made the NCAA Tournament including No.4-seed and Big Ten Champion Wisconsin, No. 5-seed Nebraska, No. 7-seed Minnesota, No. 11-seed Penn State, No. 16-seed Purdue, and Michigan.