Volleyball gets ready for NCAA tournament 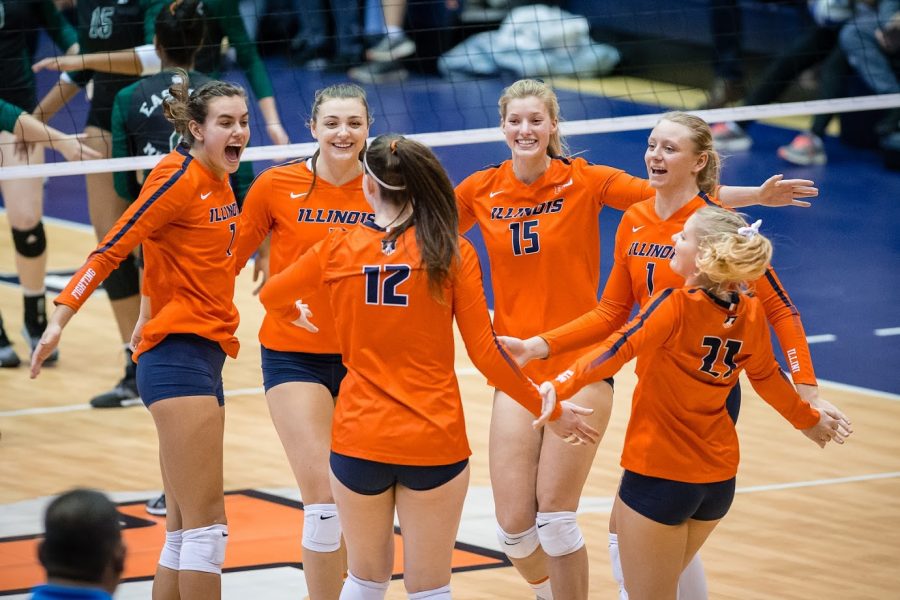 The Illini celebrate after scoring a point during the match against Eastern Michigan in the first round of the NCAA Tournament at Huff Hall on Friday, Nov. 30, 2018. The Illini won 3-0.

After a 16-13 regular season and finishing with a conference record of 11-9, the Illinois volleyball team is headed back to the NCAA tournament. Illinois will face No. 17-seed Utah in Provo, Utah, on Friday in the first round of the tournament.

The team has made the tournament the last three seasons behind third-year head coach Chris Tamas. Last year, Illinois made it to the Final Four but lost to Nebraska in five sets. But this season, Illinois has had its share of struggles, resulting in an at-large bid and underdog status.

Illinois was ranked between No. 6 and No. 25 this fall but gradually descended down the rankings as the season went on, and after losing to Northwestern, the team dropped out of the rankings for the first time this season.

Developing new talent and filling gaps where standout players graduated led to inconsistencies throughout the season. Even so, the Illini have had good moments too. Early in the season, Illinois beat then-No. 7 Marquette and midway through the season, the team pushed Wisconsin, Nebraska and Penn State, who became the top-three teams in the Big Ten, to five-set matches. The Illini see their tournament berth as a chance to show what they’re capable of.

Redshirt freshman setter Diana Brown witnessed the tournament environment last season without playing in the matches. Brown said the tournament is a chance for Illinois to wipe its slate clean.

“We had our ups and downs, but it feels like we hit a reset button going into the tournament,” Brown said. “Everyone is 0-0. I didn’t play last year, but I got to be in all the environments, and obviously, last year was a lot of fun, so we’re hoping to make a deep run like we did last year. The vibe is different going into tournament games … it’s kind of like now or never. It’s different because it’s like that vibe for every single team, you don’t have a guaranteed game after this. Everyone is at the same level right now, no one has any wins or losses in the tournament.”

The Illini will call on their tournament experience from the last two seasons, especially from the Final Four in 2018. The Illini are returning 10 players from last season’s team, including Illinois’ highest scorer in 2017 and 2018, senior hitter Jacqueline Quade.

Veteran Illini know what it takes to make a run in December.

“We have a lot of girls who played on the Final Four team last year and played in pressure moments,” Brown said. “They’ve helped me and our other freshman kind of get into that same arena as we call it. I think we have this mindset like ‘why not us?’ Like I said we kind of hit the reset button and were given another life, so we’re going to take full advantage of it.”

Utah finished the season 22-9 with a conference schedule that included 14 ranked teams, in which Utah defeated six of them. The team’s highest-ranked win was over then-No.7 Kentucky in week one. Utah finished third in the Pac-12, which rivals the Big Ten as one of the most competitive volleyball conferences in the country.

Utah is led offensively by junior outside hitter Dani Drews, who averages 4.69 kills-per-set on a .243 hitting percentage. The Utah defense averages 2.6 blocks per set, while also digging the ball 14.1 times a game.

If Illinois wins against Utah on Friday, the team will play the winner of No. 13-seed BYU and New Mexico State the next day.

“We just know what to expect in terms of environments and how you have to bring your best game,” Tamas said. “That’s what we get used to in the Big Ten anyways. But just being in the tournament is a whole different deal, and we know your next game is to potentially go home. So, we just want to make sure that we’re good with our scout this week. We know we’re playing a quality opponent in Utah. We’re 100% focused on them, so that’s the only match that matters right now.”