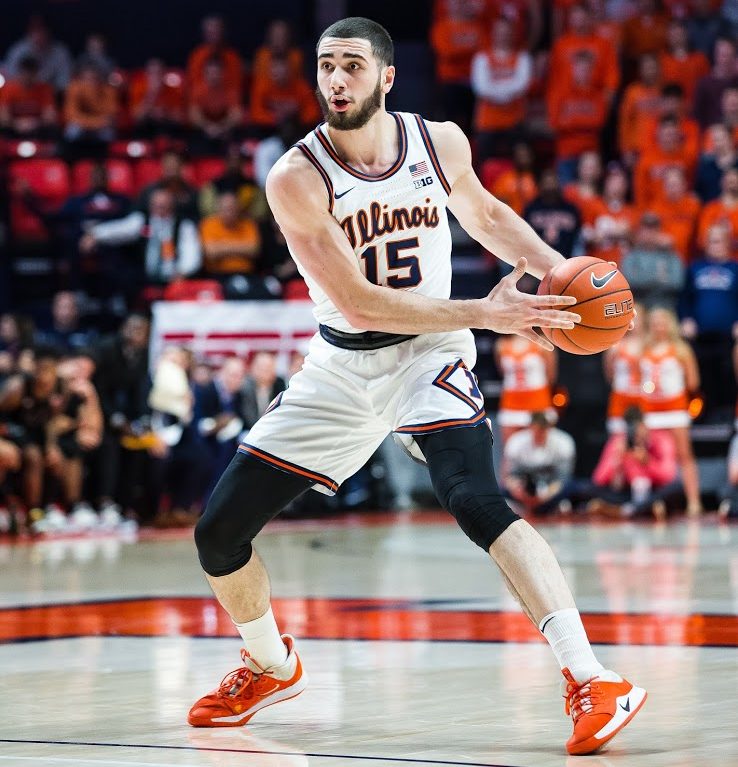 Sophomore Giorgi Bezhanishvili dribbles from behind the arc during Illinois’ game against Miami at State Farm Center Monday. Illinois’ fell to Miami 81-79. Bezhanishvili is adapting to his new role as power forward.

However, with the arrival of highly touted freshman center Kofi Cockburn this season, Bezhanishvili is now playing power forward, matched up against more mobile, wing-type players who can get into his airspace on jump shots. And with Cockburn clogging up the middle, there isn’t necessarily a lot of room for Bezhanishvili to back down smaller defenders.

As a result, the Georgian sophomore knows he needs to possess a reliable jump shot.

Thus far through eight games, that confidence is evident as Bezhanishvili is shooting 60% from the field. Bezhanishivili has taken just eight shots from deep, yet he’s still drained five of them, which could be a sign he should let it fly from behind the arc more often.

Illinois head coach Brad Underwood knows Bezhanishvili can hurt defenses with his jumper but wants his sophomore big man to play within the flow of the game and not force shots, especially when Cockburn is open inside.

“I don’t mind if he takes them, the one thing I like with Giorgi is his understanding,” Underwood said. “He’s probably turned down a handful of them that he could’ve taken, or maybe would’ve taken in the past to deliver the ball to Kofi who’s closer to the rim and has (a) better angle. That’s the knowledge and the understanding that I love about Kofi’s ability to put pressure on the front of the rim and Giorgi’s understanding of that.”

“Do I think (Giorgi’s) gonna make it? Yeah. Do I want him to shoot it? He’s taken a million of them. He practiced. You’re gonna see that percentage be better because he has good touch, (and) his thumb’s not strained as it was last year. I’m sure there’s gonna be nights where he gets a few more up, and there’ll be other nights when the defense will guard him differently, and he’s smart enough to understand that,” Underwood said.

Illinois’ schedule revs up from here on out in terms of difficulty, as the team travels to No. 3 Maryland and hosts No. 4 Michigan, opening conference play with two top-10 teams.

As a result, Bezhanishvili, who has only played at least 30 minutes three times thus far, will be in for a heavier workload, which could affect the accuracy of his jumper, as his limbs get heavier late in games.

“Obviously it really affects my stroke,” Bezhanishvili said. “I don’t think only me, but every player tries to work through that. Always try to work through fatigue, and when we’re tired and it’s (the) fourth quarter, we still got to be able to shoot.”

It remains to be seen whether or not the sophomore can rise to the challenge against stiffer competition, only time will tell.

Aside from shooting, Bezhanishvili knows there are other areas he needs to work on as well, specifically maintaining his basic big-man skills.

“Personally, I’ve been horrible at rim protection,” Bezhanishvili said. “Haven’t taken any charge(s) or blocked many shots. Haven’t done my best, obviously got to improve on that.”

Playing with Cockburn was always going to take a bit of an adjustment period, but the duo failed miserably the last time Illinois faced real competition at Arizona Nov. 10, and will undoubtedly be looking to rewrite their narrative as the Illini take on more talented teams, where more eyes will be watching, going forward.