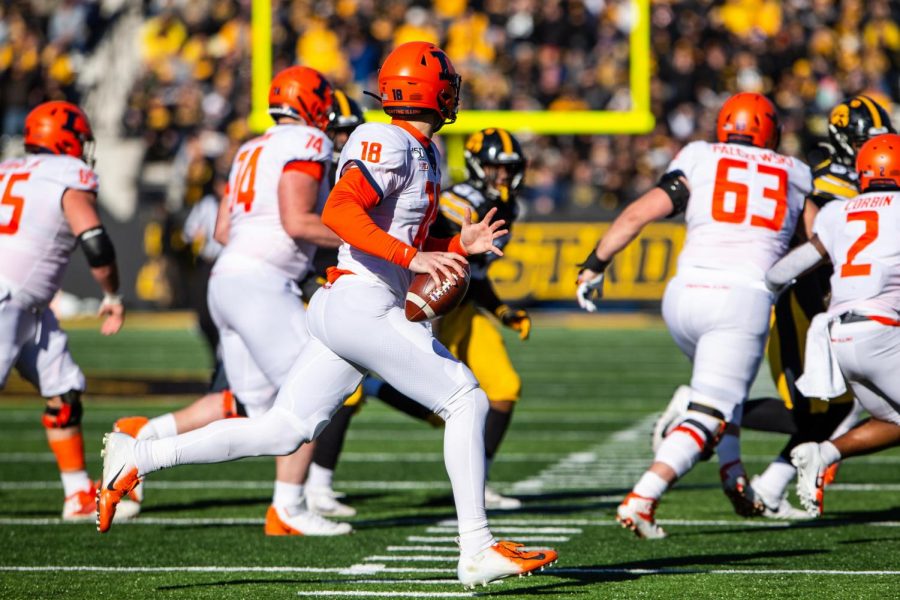 Illinois quarterback Brandon Peters rolls to the right and looks for an open receiver during Illinois’ game at Iowa Saturday. The Hawkeyes beat the Illini 19-10, snapping their four-game win streak. Captured at Kinnick Stadium on 23 Nov. 2019 by Jonathan Bonaguro.

This fall, Illinois experienced memorable victories and tragic losses at nearly every turn. Some Illini teams saw serious growth in the latter part of 2019, while others fell victim to expectation-shattering campaigns. Despite what record books and scoreboards may suggest, the Illini were full of surprises and gave fans countless reasons to celebrate. Here’s a glimpse into the fall season and a look at the Illini’s report cards.

Head coach Lovie Smith wasn’t able to lead the Illini to a winning record this season – Illinois finished 4-5 in the Big Ten and 6-6 overall – but he did guide the team to its first bowl game appearance since 2014.

Despite falling to Northwestern (9-3) on Senior Day to close out the regular season, Illinois secured notable wins over No. 6-ranked, Big Ten runner-up Wisconsin and a 37-34 comeback victory at Michigan State. Illinois shined incredibly bright in some games but struggled in others.

Although losing to Northwestern was a curveball and a devastating way to send Illinois’ seniors off following their last game at Memorial Stadium, Illinois football has improved. Last year, the Illini were bulldozed 63-0 by the Iowa Hawkeyes. This fall, there were only 9 points between the two teams (Illinois lost 19-10). Illinois looked like a well-oiled machine during some of its bright spots this season, including beating its first ranked opponent since 2011 and the highest-ranked foe since 2007 in the Illini’s upset over the Badgers.

However, Lovie Smith and company still dropped the ball, literally, on a handful of early games. Nebraska and Eastern Michigan slipped through Illinois’ fingers and sent the team into a four-game losing streak nosedive. Losses sprinkled throughout the Illini’s season gave fans sporadic reality checks amid magical moments. Illinois earn a B for monumental improvements across the board but fall short of an A due to the inability to sew together a few easy wins.

After starting off the season with a pair of wins against a ranked Tennessee team, Illinois fell into a four-game losing streak and set the tone for a fall campaign full of ups and downs. Illinois had a lot to live up to following one of its most successful seasons in program history in 2018. Last year, the Illini went 32-4 overall and 17-3 in the Big Ten, beating eight ranked teams during the regular season and eventually earning a bid to the Final Four. This year’s narrative had an alternate plot, however. Illinois graduated two of its titans, middle blocker Ali Bastianelli and setter Jordyn Poulter, and saw gaps on both offense and defense as a result.

This season, the Illini achieved a winning record, 16-14 overall and 11-9 in the conference, and made it back to the NCAA tournament on an at-large bid under the guidance of third-year head coach Chris Tamas. Despite this, Illinois fell below expectations and descended in national rankings as the season ensued. The Illini began the season as the No. 6-ranked team in the country and rose to the No. 5 spot after beating No. 19 Tennessee twice, but Illinois tumbled to No. 14 after losing to No. 16 Washington and being swept by an unranked Colorado team.

While the squad beat several ranked opponents, such as No. 7 Marquette and No. 17 Purdue, the offense wasn’t as dominant as in 2018. Illinois was still brimming with bright spots, however. Outside hitter, and a cornerstone to the Illini’s offense, Jacqueline Quade capped off her senior season with a second-straight American Volleyball Coaches Association All-Northeast Region award and All-Big Ten first-team honors. Fellow senior and middle blocker Ashlyn Fleming collected All-Big Ten second-team accolades, while freshman Diana Brown was named to the Big Ten All-Freshman Team, and senior outside hitter Beth Prince was given Illinois’ Big Ten Sportsmanship Award.

Head coach Sarah Haveman of women’s cross country winning a U.S. Track and Field and Cross Country Coahces Association coach of the year award following her second season at the helm program is the tip of Illinois’ incredibly successful iceberg. Before Haveman made history as only the second Illinois coach to receive USTFCCCA’s Midwest Region Coach of the Year award, No. 21 Illinois won its second-ever NCAA Regional Championship title on Nov. 15 and returned to the NCAA Championships for the first time in 10 years on Nov. 23.

Four Illini nabbed All-Region honors following the team’s dominant feat at the Midwest sectional, including juniors Allison McGrath and Rebecca Craddock, sophomores Madison Marasco and Emma Milburn. Illinois earned 22nd place out of 31 teams at the NCAA finals in Terre Haute, Indiana. The team was the fifth Big Ten team to finish behind Michigan State, which finished first for the conference in sixth place, Michigan in 13th place Penn State in 18th place, and Indiana, which finished just before Illinois, in 19th place. Ohio State followed Illinois in 23rd place.The NCAA Championships bookend one of Illinois’ best seasons in 10 years.

The 2009 championships were the last the women’s team competed in, where the Illini finished 12th overall and were led by Illinois Hall of Famer Angela Bizzarri, who won an individual national title the same year. Bizzarri holds an Illinois school record in the women’s 6k of 19:46.8, besting the previous record by 12 seconds. Illinois will return all of the runners who competed in this year’s NCAA Championships for the 2020 season.

Illinois took steps in the right direction this fall, but didn’t see success in the postseason. Under the guidance of head coach Sarah Haveman, the Illini improved on previous team finishes. Last year, Illinois garnered  third place at the Bradley Pink Classic in Peoria, Illinois. but took home second as a team this year. In 2018, Illinois ran to a 10th-place finish at the Big Ten Championships but secured ninth place on Nov. 3 in Columbus, Ohio. However, the team’s season ended after crossing the finish line in ninth place as a team at this year’s NCAA Midwest Regionals, which is still an improvement from 11th place in 2018.

While the Illini took several strides forward, the program still lacked two of its major weapons: senior Jesse Reiser and junior Jon Davis, who missed their second-straight cross country seasons. Both athletes took redshirts in 2018 but saw some competition on the track this spring. Reiser clocked the third-fastest 10k time in program history and earned All-Region honors at the 2017 Midwest Regional along with All-Big Ten accolades from the same season. Reiser also recorded the eighth-fastest 8k time in Illinois history in 2015 at the Big Ten Championships.

Davis’ absence created a significant gap on Illinois’ roster, as the three-time All-American holds an individual title from the 2017 Midwest Regional and finished 49th overall at the NCAA Championships the same year. Davis also holds school records for the second and fourth-fastest times in the 10k and 8k, respectively.

Illinois started the season off strongly. The team won six of its first seven regular-season contests, including a 3-2 victory over No. 22-ranked Pepperdine and a 3-1 dub over Northwestern at home to open up Big Ten play in September. Yet troubled waters extinguished Illinois’ initial hot streak. Following the team’s first conference victory, the Illini slipped into a five-game losing streak. A 2-1 victory over Michigan State on Oct. 13 interrupted Illinois’ slump but marked the team’s second win in the Big Ten.

A road swing to Penn State and Ohio State handed Illinois another loss and tie, respectively, before the team returned home to host Wisconsin and Minnesota in its final regular-season matchups.

Although Wisconsin defeated Illinois 1-0, the Illini wrapped up their fall campaign with a 4-1 win over Minnesota, earning a 9-8-1 record overall and 3-7-1 in the Big Ten. The season was sprinkled with handfuls of frustrating games and low points that boxed Illinois out of the Big Ten and NCAA postseason tournaments.

Last year, the Illini went 11-8-1 overall and 6-5-0 in the conference, notably defeating two ranked opponents in the same season for the first time since 2013 and earning the team’s 17th Big Ten tournament bid along with five athletes collecting All-Big Ten accolades. While Illinois regressed in performance in 2019, the fall was defined by high points such as Janet Rayfield tallying her 200th win as head coach for Illinois following the team’s conference opener and the field completion of Demirjian Park Soccer and Track and Field Stadium, which opened in time for Illinois’ game against Colorado College in September.

The men’s tennis team typically goes head-to-head with Big Ten foes in the spring, but the Illini engage in tournaments year-round. Senior Aleks Kovacevic capitalized on Illinois’ fall season by leading Team U.S.A. to a championship title at the Master’U BNP Paribas Collegiate Tournament in Grenoble, France, on Nov. 26 – Dec. 1.

Senior Illini golfer Tristyn Nowlin tied for first place individually after shooting a 67 in the final round at the Schooner Fall Classic on Sept. 29. Illinois didn’t finish outside of the top five during the fall season and earned a No. 13 ranking in the final Women’s Golf Coaches Association poll of 2019, moving up five spots and coining the team’s highest rank of the season and of all Big Ten teams.