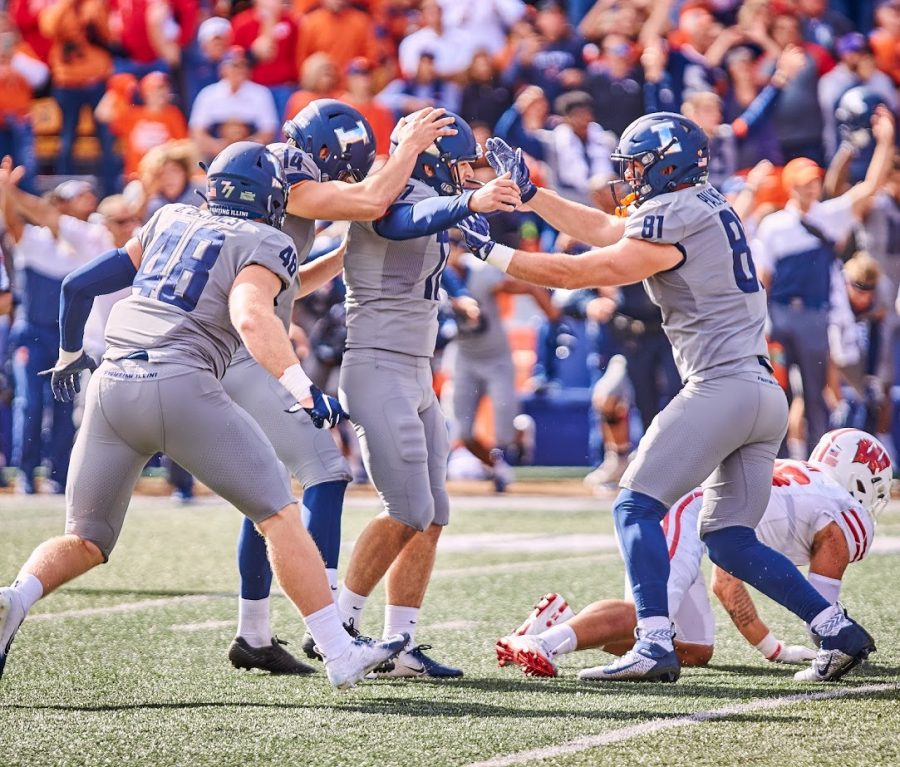 The Illinois football team celebrates with kicker James McCourt after he scored a field goal during the Illinois’ game against No. 6 Wisconsin. Illinois and California will go head-to-head in the Redbox Bowl Monday at 3 p.m. CT in Santa Clara, Calif.

Many Illini fans were scratching their heads when Director of Athletics Josh Whitman announced a two-year extension of head football coach Lovie Smith’s contract last season. It’s safe to say most of them aren’t anymore.

“We want to be Big Ten Champions someday,” Smith said. “Our program will eventually get there. In the meantime, we’re going to keep building. There’s a process we’re going through, and a part of that process was playing better football in 2019. I think we’ll all say we’ve made progress with that.”

Maybe it was the new facility. Maybe it was the transfer portal. Maybe, like raising a child, it took a whole village to turn things around. One thing is clear, however: The Illini are happy, but they aren’t satisfied.

Illinois is going bowling. After closing out its season with a 6-6 record overall, the Illini have been summoned to Santa Clara, California, for their first bowl game, the Redbox Bowl, in the Lovie Smith Era.

“I have faith in what we’re doing,” Smith said. “I have faith in our players, our process, coaches and everything else we have in place. There’s been steps along the way, things that we had to do. It was important for us to get that new Smith Center. It was important for us to put a better product on the field. For people to get on board before they could see the results, it meant an awful lot.”

The 2019 Redbox Bowl will be the 19th postseason bowl appearance for the Illini, whose last bowl appearance in the Bay Area was in 2011, where Illinois beat the University of California Los Angeles 20-14 in the Kraft Fight Hunger Bowl. They will face Pac-12 Conference opponent California, who finished 7-5 with a 4-5 record in conference.

“It’s exciting for the University of Illinois to be back and have the opportunity to compete in a bowl game,” Whitman said. “It’s an important step in the continued development of Illinois football. I’m really proud of the men in that locker room and grateful for the hard work they’ve put in to get us to this place.”

The last time the Illini reached a bowl game was in 2014 under then-head coach Tim Beckman. But, Illinois lost 35-18 to Louisiana Tech. In the game, the Bulldogs took a 14-3 lead at the end of the first quarter and never looked back.

The Illini lead the all-time series versus the California Golden Bears, 7-3. Illinois was dominated during its last matchup against California Berkeley, 35-20, the fourth of two home-and-home matchups from 2000-2005. This will be the team’s first bowl meeting.

The Illini will travel to San Fransisco on Dec. 26 and enjoy San Francisco for a few days leading into the game on Dec. 30.

“We don’t want six wins to be the bogey,” Whitman said. “Of course, we want to be in the postseason year after year. I think at some point we want to be talking about what kind of bowl we’re getting into instead of just trying to get one. But before we can have that conversation, we have to get back into the bowl business. It’s huge for us to be back and be a part of this really exciting part of the college football season.”