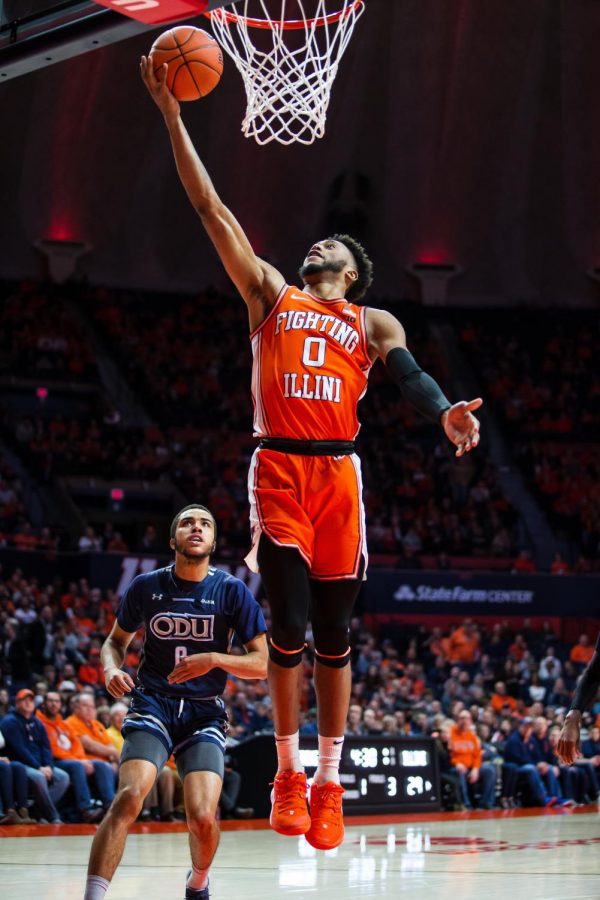 Sophomore guard Alan Griffin rises for a layup during the Illini's game against the Monarchs at the State Farm Center Saturday. Griffin led the Illini past the Monarchs, 69-55, with 15-points in 16 minutes off the bench. Illinois will travel to the Enterprise Center in St. Louis to face Mizzou in the annual Braggin Rights game Saturday, Dec. 21. Captured by Jonathan Bonaguro, The Daily Illini.

The Illinois men’s basketball team went into Saturday evening’s matchup against Old Dominion with significant momentum after beating No. 5 Michigan three days prior. The Illini (8-3, 1-1) rode that momentum through all 40 minutes against the Monarchs, never surrendering the lead.

“I don’t think it was the prettiest basketball game,” said head coach Brad Underwood. “I was a bit concerned about this game for some time. I know how good of a coach Jeff Jones is, I know where his program was at last year. And, as I started diving into all of their sets and all of their actions, and he’s got a play list that’s pretty deep, I knew it would challenge us.”

But, after facing two top-five opponents in the Big Ten, the Illini posed a balanced attack against the Monarchs as sophomores Alan Griffin and Ayo Dosunmu along with freshman center Kofi Cockburn all scored in double digits. Griffin led the Illini with 15 points, shooting 85.7% from the field.

“I’ve been really pleased with Alan,” Underwood said. “He’s a valuable, valuable piece to this team, and tonight he was very good other than (a) couple of plays.”

An early 13-4 run pushed the Illini ahead of the Monarchs. While a nearly five-minute scoring drought stalled the Illini’s offense, 52% shooting from the field in the first half helped them maintain the lead.

“I was really impressed with the first half,” Underwood said. “Defensively, I thought we did a good job of handling their stuff.”

The Illini came out of the break strong, jumping out to a 51-30 lead just over seven minutes into the second half. Illinois had its largest lead of the night, 29 points, about 10 minutes later.

While the bench struggled against Old Dominion’s main core near the end of the game, Illinois finished the game on 46.8% shooting from the field and a season-high 90% from the free-throw line. Sophomore Giorgi Bezhanishvili and Dosunmu were both four-for-four from the charity stripe.

Illinois will travel to St. Louis in a week for the annual Braggin Rights game against the University of Missouri. Tip-off is set for 12 p.m. at the Enterprise Center.