Seniors Corbin and Harding reflect on final game as Illini 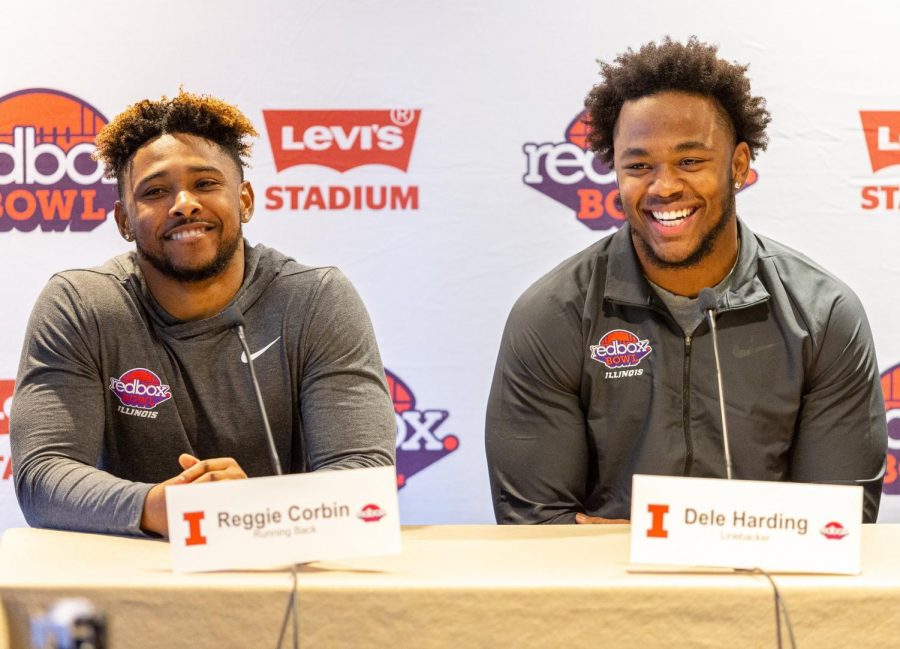 Seniors Reggie Corbin and Dele Harding speak at a Redbowl pre-game press conference in San Fransisco on Friday, Dec. 27. Corbin, Harding and the Illini will go head-to-head with the California Golden Bears in the Redbox Bowl on Monday, Dec. 30 at 3 p.m. CT. Photo taken by Jonathan Bonaguro.

Every athlete has an expiration date to their athletic careers; whether it be in high school, college or at the professional level, sports has a 100% retirement rate.

For senior runningback Reggie Corbin and linebacker Dele Harding, the 2019 Redbox Bowl will be the last time they’ll wear the coveted orange and blue.

Both Corbin and Harding have endured mountains of adversity throughout their careers, but their last collegiate game will also be the pair’s first bowl game.

“Still just trying to wrap my head around it,” Corbin said. “The fact that we had practice today, California, unreal. But I’m glad about all the stuff we went through, I got the greatest group of guys. I wouldn’t rather go to war with anyone else.”

Corbin noted that although it was rough during his beginning years, like the time he was benched partway through his sophomore season, he attributes the person and player he’s become today to the trials he faced throughout his career.

Corbin reflected on a moment when head coach Lovie Smith told him he wanted him to continue playing runningback for Illinois. Lovie Smith’s faith in his “bell cow” paid off, as Corbin’s explosiveness helped jumpstart an otherwise stagnant offense, running for a team-high 1,085 yards and nine touchdowns while leading the nation in 70+ yard carries, with four. This season, Corbin became the 18th runningback in school history to rush for 2,000 career yards on the way to leading the Illini to their first bowl appearance in five years.

Harding’s player development is the blueprint of what programs seek to achieve, starting out on special teams, to being voted the special teams captain for his junior season before getting the starting nod at linebacker in 2019 after the Illini finished 124th in team defense in 2018 according to sportsreference.com

In Harding’s first year as a starter, he became No. 2 in the nation in total tackles with 147 behind California linebacker Evan Weaver’s 173, on the way to being named to the All-Big Ten first team by the media.

Harding was also the second player in the nation in the last 20 seasons to have at least 12 tackles, two tackles for loss, one forced fumble, one interception and one touchdown in a single game against Rutgers.

“It’s just a blessing to be where we’re at,” Harding said. “Looking back to where we were and how we got here today, a lot of fight, sweat, hard work, blood, tears.”

“When you go through things like (a four-game losing streak), you can go one of two ways: just let it happen or fight against it. All the pride and fight that we have, that stretch brought us together as brothers.” Harding said.

In a game teeming with emotion and value to the two players, Corbin and Harding have contrasting approaches to handling the eagerness that will arise come game time.

“You never really know until it hits you,” Harding said. “My approach is to take it as any other game… As far as emotions I don’t want to get riled up, the crying sort of thing I try to stay as linebacker oriented if you will.”

For Corbin, it’s the opposite.

“I’ll probably just let loose to be honest with you. My style of runningback is a little different, just trying to do whatever, I think coach Rod has given me free reign to run how I feel. Whatever comes to me I’m just going to let loose and leave it all out there,” Corbin said.

The Illini will face off against the California Golden Bears at Levi Stadium on Dec. 30 at 3 p.m. central time.