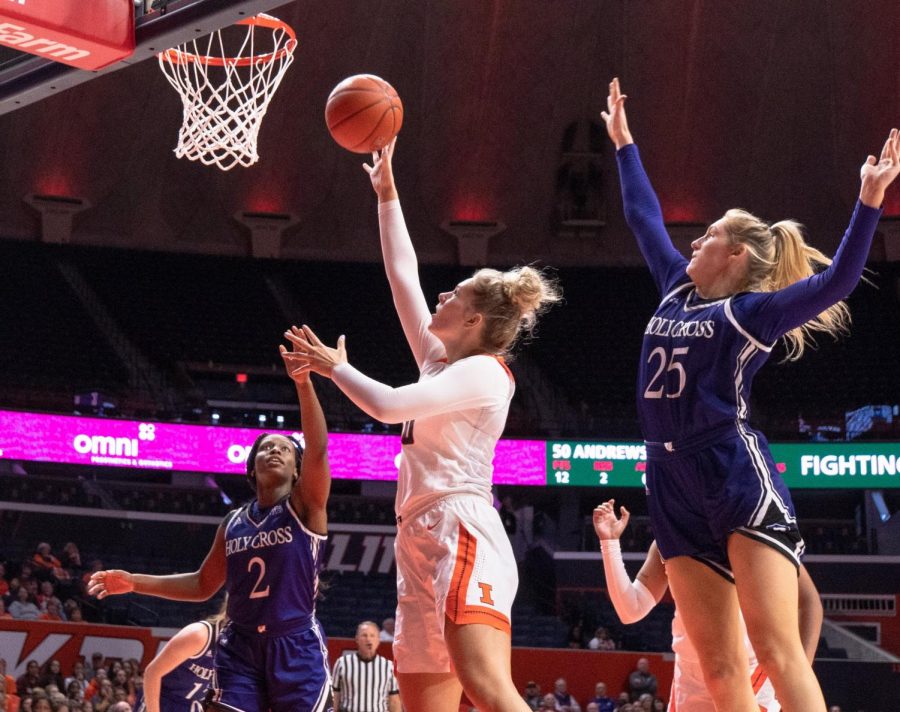 Senior Ali Andrews goes for a layup during Illinois' game against Holy Cross on November 9. Illinois won 78-75. Andrews led Illinois in scoring with 15 points during the team's Big Ten opener against Northwestern. The Illini fell to the Wildcats Saturday afternoon 77-50.

The Illini’s loss to the Northwestern Wildcats Saturday fueled the recent conference losing trend under third-year head coach Nancy Fahey. Since Fahey took over the program in 2017, the Illini have started each of their conference campaigns 0-1.

Despite earning and maintaining a lead in the first quarter, the Wildcats bulldozed over the Illini the rest of the game to win 77-50.

Illinois’ offense was fueled by its upperclassmen, contrary to significant production from freshmen standouts Kennedi Myles and Jada Peebles the Illini have seen so far this season.

In the midst of several large Illini scoring droughts, senior Ali Andrews led Illinois with 15 points, including 11 in the first quarter, shooting 7-for-13 from the field overall. Redshirt-junior Petra Holešínská and senior Courtney Joens trailed Andrews with nine and eight points on the day, respectively.

Following Saturday’s loss, Illinois moves to 9-3 overall and 0-1 in the Big Ten, while Northwestern improves to 11-1 overall and 1-0 in the conference. Despite the loss, Illinois began its season with its best 11-game start since 2006-07 season.