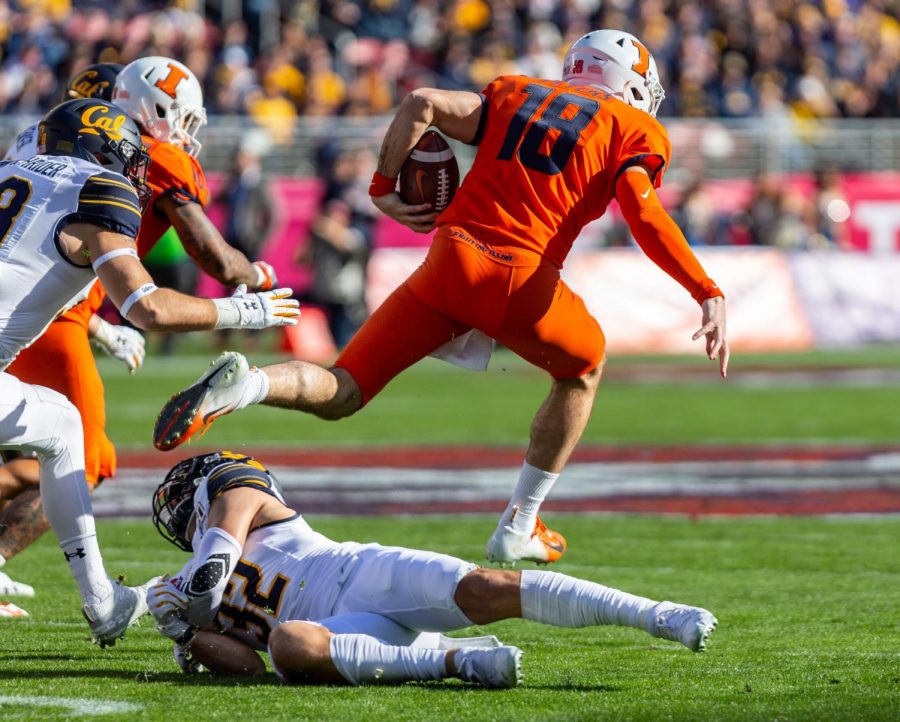 Graudate transfer quarterback Brandon Peters jumps over a California defender during the Redbox Bowl on Monday. Illinois fell to California 35-20 in the team's first bowl game since 2014.

Fourth and 17, less than two minutes remaining and Illinois is trailing by two possessions.

Such circumstances would indicate that it’s time to pack it up, play conservative and not risk injuries, especially to players with remaining eligibility.

Illini quarterback Brandon Peters had other ideas, however, as he rolled out to his right looking for an open receiver past the sticks. Nothing materialized, so he tried the unthinkable: Peters took off on a rushing attempt trying to pick up the seventeen yards himself.

As he headed toward the Cal sideline, two defenders appeared ready to sandwich him, with a third running at him from the first down marker like a heat-seeking missile.

In an effort to beat the trio to the spot, Peters dove with the ball extended from nearly six yards out.

Upon landing out of bounds on the Cal sideline, Illinois’ junior signal-caller stayed down for an extended period of time. While on the ground receiving treatment, officials ruled Peters short of the line to gain, but the play went under further review.

Upon a second glance, it appeared as though Peters picked up the first down, but the officials didn’t see it that way and the call on the field stood.

On paper, the play meant very little. Illinois would likely have still lost the game even if Peters had picked up the first down. But to head coach Lovie Smith, Peters’ willingness to put his body on the line down two scores late in the game will be an image he uses as a tool to motivate the 2020 Illini, as the offseason began following the 35-20 loss in the 2019 Redbox Bowl.

“We’re disappointed in the loss of course, but we’re gonna go into next season with that play that Brandon tried to make on fourth down,” Lovie Smith said. “He said that he think’s he’s found a home, he’s found a home here for sure.”

Never one to waste words, Peters simply stated he was trying to do whatever he needed to in order to gain the first down.

He eventually popped up from the pain of the dive and came out for the Illini’s final drive.

“It was fourth and 17 so I was just trying to give our team a chance to keep the ball moving,” Peters said. “Just gave it everything I had to get the first down.”

Game may not have ended like the #Illini wanted, but 261 pass yards and 68 rush yards (without his number 1, 2 and 3 targets) is a hell of a game from Brandon Peters.

Brandon Peters is a stud, kid put his body on the line that last offensive play of the season. Great season for this @IlliniFootball team. First bowl game during my time as a student in the college of @ACESIllinois

I don't care that they didn't win.

Brandon Peters should never have to pay for a beer in Chambana for the rest of his life. https://t.co/akJ8AJweJL

Sophomore eceiver Donny Navarro, who led the Illini with 77 yards receiving in the game, was similarly impressed.

As a now-former walk-on, Navarro knows the depth of effort required to truly give everything for the team, and couldn’t have been more impressed with his quarterback despite the controversial turnover on downs.

“I’m sitting there on the field like wow, this guy’s got heart,” Navarro said. “First season with us and this guy wants to win. He’s a playmaker, he’ll put his body on the line for this team and he’s done that plenty of times this year, it’s not like today he just did it: I’m speechless.”

The officials’ decision not to overturn the spot of Peters’ run highlighted a myriad of tough breaks that went against the Illini in the Redbox Bowl, including a confirmed targeting call against the homecoming Milo Eifler that many who saw the hit highly disagreed with.

Though some tough breaks in officiating went against the Illini on Monday, Peters’ effort to pick up the first down despite the minimal chance that Illinois would win will serve as an image of inspiration that may be reflected in both the effort and mentality of the Illinois football program going forward.