Tati’s Take: Redbox was a rollercoaster 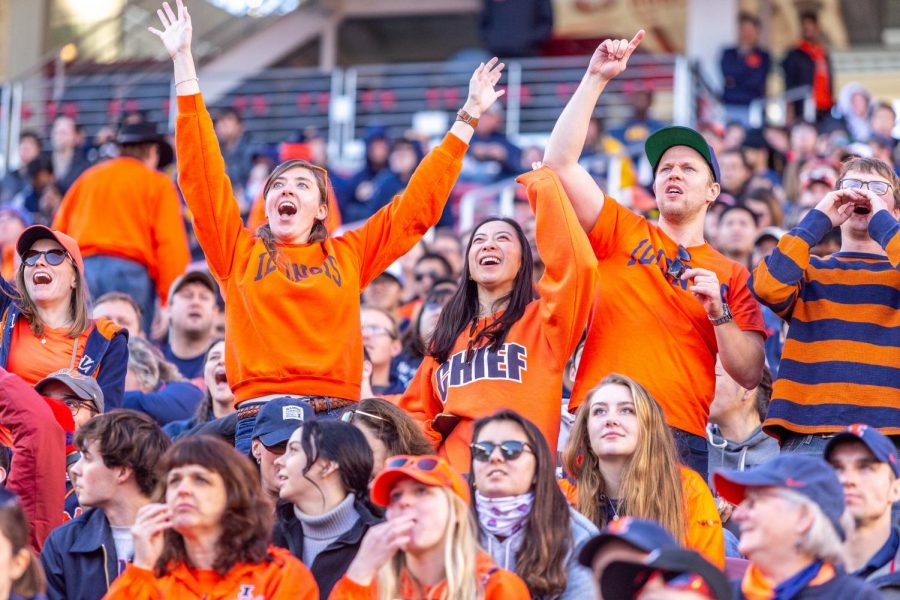 Illini fans cheer from the stands during the Redbox Bowl at Levi's Stadium in Santa Clara, Calif. Illinois lost to California 35-20 Monday.

At the peak of the highest coaster, one might be able to catch a glimpse of what’s going on in the stadium and the sounds from both places can certainly be heard from the other.

The amusement park was closed during the Redbox Bowl, but for Illini fans there was still quite a long roller coaster ride to endure.

After standing in line for who-knows-how-long you’ve finally made it to your seat and get buckled in. Your heart is beating but this is the most excited you’ve been all day.

At the start of the game, it looked like the Illinois defense was well prepared to handle anything Cal’s offense attempted. In the first drive of the day Illinois collected two sacks and it looked like that was how the game would go.

The ride has begun. You are moving forward but pretty slowly as the anticipation begins to build. Something big is coming, you kind of know what it could be but there is still enough of the unknown that you can’t help but be excited.

Illinois was the first up on the board. For just a second there, everyone was able to say that the Illini were winning in a nice weather bowl.

When the season began, that sounded like a rude joke with Illinois as the punchline, but it was real.

Cal was the first to score a touchdown, but Illinois responded pretty quickly and remained up going into the second quarter.

The worst best feeling in your gut. This is the part that you may have dreaded or have been the most excited for. Your heart is in your stomach and your stomach is in knots, but for some reason, this is still really fun.

It was pretty clear, rather quickly, that Cal’s Chase Garbers was a force to be reckoned with.

Garber ran in one and threw for another touchdown in the second while Cal’s defense held Illinois to just a field goal.

As the Bears began to pull away, the drop feeling started to settle in.

The upside downs and loopty-loops at rapid speeds while whipping your head around from side-to-side is somehow essential to the fun of the ride yet not always the most pleasant.

Illinois has proven they can come back in the past so immediately after the half there was still quite a bit of optimism.

Until the refs stepped in and, sort of, broke what was left of the Illini hope. The first head whip came with Milo Eifler’s ejection, followed later by the horrible Brandon Peters call that pretty much decided the rest of the game.

Sad to leave but excited for the next one

After all that excitement you have slowed down and must coast into the departure zone. Reflecting on the happiness that was this ride and already planning for which ride to get on next.

Illinois lost, so what.

There were so many highs of the season and quite a bit of things to reflect on in the best season of the “Lovie era.”

Was there a bit a stumble on the big stage? Sure.

But honestly, what was expected? If the fans were excited about the Illini’s first bowl game in half a decade, imagine how the team felt.

Sydney Brown said in the post-game press conference that San Francisco was a city of distractions. All of the things Illinois was unprepared for, happened off the field.

The Redbox Bowl was a learning experience, the final first for Illinois to finally be ready in the new decade.