Notes and grades: Illinois at No. 14 Michigan State 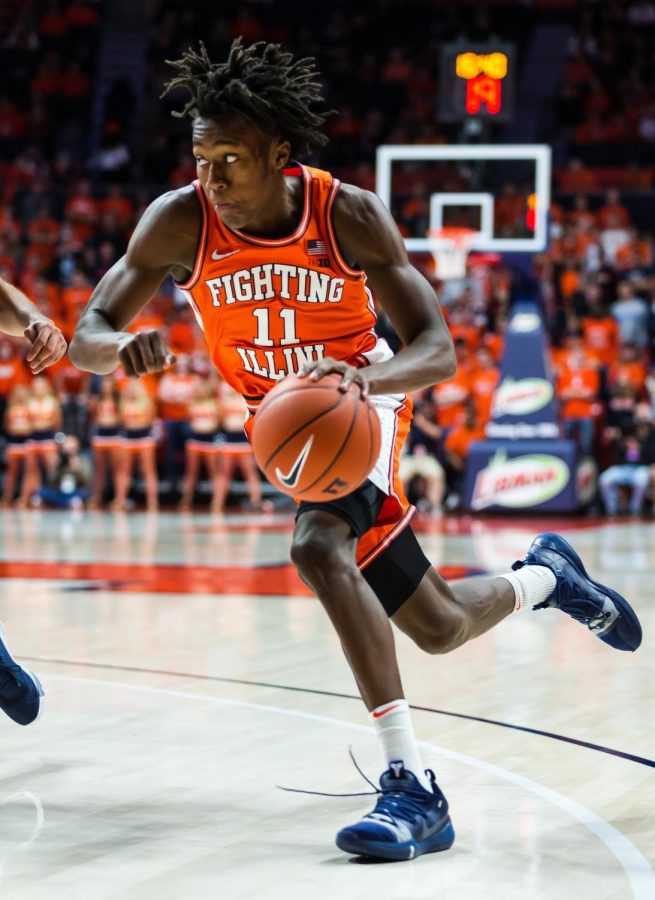 Illinois traveled to East Lansing, Mich. for a matchup with No. 14 Michigan State to restart Big Ten play on Thursday night. Brad Underwood’s team was able to keep it close throughout the first half despite star freshman Kofi Cockburn picking up two early fouls. Going into the break the Illini trailed just 36-30. The second half was an entirely different story as Tom Izzo’s squad ran away from Illinois in the second half on the back of Cassius Winston and Xaiver Tillman, leading the Spartans to a 76-56 victory.

Frazier failed to score in the first half, missing a couple of threes that would have been momentum swinging in favor of the Illini. Defensively, Frazier was solid on the ball int he half court but struggled to stay in front of his man when Michigan State ran the fast break. Frazier has taken a step back offensively allowing others, especially Cockburn, to be more involved. Even in his reduced role Illinois needs him to score more than just three points to have a chance to win, now that Big Ten play has officially started.

Despite missing big threes, Dosunmu dropped 13 points in the first half, which kept Illinois in it. The star sophomore did a good job taking what the defense gave him early, with a couple of nice finishes at the rim. However, the second half was a different story. Dosunmu had just five points to finish with 18. The sophomore has been better of late, but he went 0-3 from beyond the arc, he needs to be better from deep down the stretch.

Williams was a minus-two in the plus-minus, which is about where he normally is. Williams missed two threes, with the first one being wide open and early in the shot clock. Williams has seen his minutes cut a little since Alan Griffin’s play has improved, but he still totaled 16 minutes of playing time on Thursday night.

Bezhanishvili struggled early on each side of the court, but he had three nice post-ups in the paint for six points, breaking a 56-minute scoreless streak, between the four and six-minute marks of the first half. Bezhanishvili’s defense improved in the last six minutes too, his defense feeds off his offense. Bezhanishvili came into the game shooting 6-15 from behind the arc, but he went 0-4 from behind the arc against the Spartans. Bezhanishvili’s defensive struggles continue, and largely looks lost in many situations defensively. A positive six-minute stretch to end the first half isn’t enough to earn a passing grade when the rest of the game was frustrating for the sophomore.

Cockburn came out a little wild and played smaller than his massive size. The Big Ten Freshman of the Year candidate picked up his two fouls by the 10-minute mark. Cockburn didn’t play with the same energy he did in the previous two Big Ten games. At one point in the second half, Cockburn looked at a Michigan State three-point shooter and didn’t even put a hand up. Cockburn finished just 2-10 from the field for five points and three fouls. Cockburn did have another impressive night rebounding bringing in nine rebounds, despite never getting into a rhythm.

Just when we thought we may have reached a level of consistency from the senior, he picked up three fouls and failed to register a point, rebound, or assist in the first half. The second half wasn’t any better. Nichols had an easy layup off an inbound pass, and that was one of his only bright spots of the game. The senior finished with just two points, one rebound, and three fouls in eight minutes.

Feliz needs to be more aggressive driving to the basket; in the first half, Feliz was just 1-2 from the field. The senior is elite at using his body in the paint to create space to get his shot off. Feliz needs to utilize this skill more when Illinois is struggling to score. Illinois needs him to be consistent, and he has really struggled in Illinois’ last two high major games against Missouri and Michigan State on Thursday night.

Brad Underwood has finally given the sophomore more minutes and Griffin has not disappointed. Griffin plays hard and has found consistency on the offensive and defensive side of the court. Griffin had two nice layups coming around the curl in the first half. Griffin is coming into his own, and it is a role that Illini fans are have been begging for since he arrived on campus as a freshman last season. Griffin totaled 25 minutes against the Spartans, and he should see his minutes stay around there for the foreseeable future.

Jones is still behind due to his eight-game suspension for a violation of team academic rules, and it is showing. In nine minutes the athletic sophomore failed to record a stat. For Jones to earn more playing time he needs to rebounds and be good defensively, two things he struggles with.

Hamlin was thrown into the game in the first half after Cockburn picked up his second foul in the first half. Hamlin totaled two minutes of action, and the only stat he recorded was a foul.

Underwood received a minute of playing time near the end when the game was out of reach.