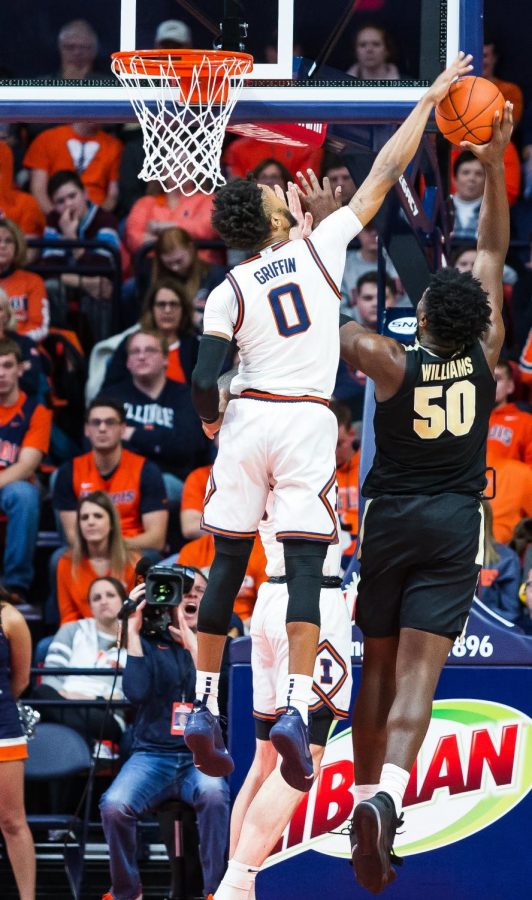 Sophomore Alan Griffin rises to block a Purdue shot during the Illini's game against the Boilermakers on Jan. 5 at the State Farm Center.

In a game many were calling a “must-win” for Illinois on Sunday night at State Farm Center against Purdue, the Illini handled a talented Purdue team 63-37 to improve their Big Ten record to 2-2 before traveling to Wisconsin on Wednesday.

Illinois blitzed Matt Painter’s Boilermakers starting the game on an 11-0 run. Illinois came into the game making just 20-100 three-attempts against high major opponents, but the Illini buried 4-11 from deep against a stout Purdue defense that ranks eighth in the country in defensive efficiency, according to KenPom.

However, Illinois looked like the top-10 defensive team in the country throughout the night. Head coach Brad Underwoods’s defense looked like a well-oiled machine on close-outs, rotations, and help defense holding Purdue to just 25% shooting and 17% shooting from three.

Frazier struggled in the Michigan State game when guarding Big Ten Player of the Year candidate Cassius Winston, but against Purdue’s lethal three-point shooter Sasha Stefanovic Frazier got back to his impressive defensive play. Stefanovic came into the game shooting an impressive 45 percent on the season from beyond the arc, and he hit just two deep balls. Frazier still has eye-opening moves on offense he had one of his ancient razzle-dazzle layups in transition floating through the air between three Purdue players getting a reverse layup. Fans got to see another acrobatic layup in the second half when he skyed through the air moved the ball away from the defenders before kissing the ball off the glass for another layup. He was on the attack on offense, Illinois needs that because he can fill up the stat book, especially when he gets opportunities off the dribble. The junior finished with 12 points on 41 percent shooting.

Dosunmu looked to have really figured it out over the last five games offensively. The star sophomore has totaled at least 14-points in the last five outings for Brad Underwood. Dosunmu didn’t get off to a great start offensively, but that was more due to other players finding success. Illinois’ star player has been more active on the glass over the last five games, as well. In the first half, Dosunmu grabbed five defensive rebounds which started the fast-break. Purdue deserves credit for taking away Dosunmu’s righthand drive, he needs to expect more teams to do this down the stretch. To get around it Dosunmu needs to hit jump shots, and that is the next step for him to be a consistent scorer. He may not have impressive offensive numbers, but Dosunmu was solid defensively and grabbed seven rebounds.

Despite missing his two of his first three shots the sophomore big man actually had a really good start. Bezhanishvili had a putback after Dosunmu got a layup blocked in transition, and he followed that up with a nice dish to Cockburn. Bezhanishvili still struggles with controlling his fouling; he was called for a defensive foul away from the ball after and an offensive whistle outside of the three-point line. The junior finished with six points, four rebounds in 19 minutes.

Illini fans were treated to Cockburn bullying 7-foot-3 Matt Haarms on an early post up on the block. Purdue’s star big man has given Illinois fits the last couple of seasons, but Cockburn imposed his size on the lengthy Purdue junior. Underwood stressed the need for Cockburn to use his body more in on the block and when rebounding. Cockburn was very physical in the first half throwing down two big dunks. The superstar freshman finished with 12 points and four rebounds.

Feliz struggled mightly in the Michigan State game scoring just two points. The senior would never use illness as an excuse but he was running a fever. Feliz came in shooting just 25 percent from three, but he is still confident to take one if it is in the flow of the offense, and he nailed a big one to stretch Illinois’ lead to 15. That was his only shot but on the defensive end, Feliz was outstanding in all areas.

Griffin continued his hot play early in the Purdue game, fighting for an offensive rebound and getting a putback off the glass to extended Illinois’ lead to eight at the time. Griffin chalked up another hard-fought offensive rebound and was rewarded with a corner three. Everyone is noticing Griffin’s improved offensive play where he has scored 58 points over the last four games. However, Griffin’s defense has been stingy in the past four games, too. Griffin had a really nice block in the second half where he slid down from the elbow to swat away a Trevion Williams baseline shot. Griffin hit a deep three to give Illinois a 51-34, extending their run to 10-2. Throughout the season he has been Illinois’ second-best rebounder, on Sunday Griffin grabbed six offensive rebounds which contributed to his 12 total. When Griffin checked out of the game for the last time he received a much-deserved standing ovation, after his 16 points and 12 rebounds.

Nichols started the game 2-4 from the field including a three from the corner, just his second three of the season. Nichols just looked confident and played his game, which is when Nichols is at his best. Nichols finished with six points and five rebounds.

Against Michigan State, Jones was whistled for four fouls in less than 11 minutes, unfortunately for Jones, he was called for an offensive charge call on his first offensive possession. Jones didn’t play until garbage time in the second half, totaling just three minutes on the night. The only stat Jones recorded was a pair of rebounds.