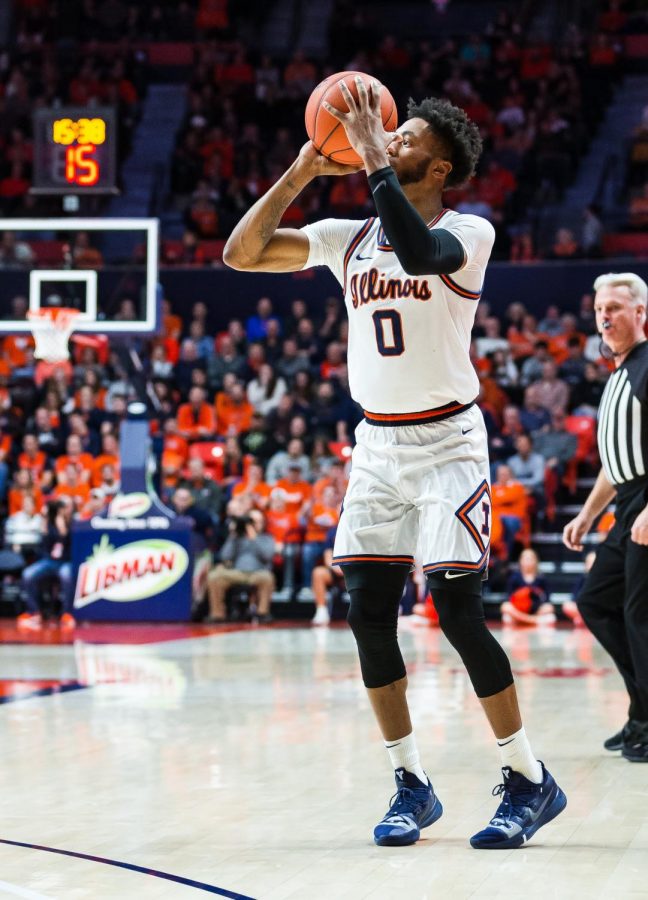 Sophomore Alan Griffin takes a shot behind the arc during the Illini's game against the Purdue Boilermakers at the State Farm Center on Jan. 5.

Though defense hasn’t been the calling card of the Illinois basketball program under Brad Underwood, the Illini locked in and held Purdue to just 37 points while putting up 63 of their own in a victory Sunday night.

Alan Griffin picked up the slack for Illinois off the bench, putting up a double-double with 16 points and 12 rebounds, both of which led the Illini. Former Nebraska coach Tim Miles, calling the game for Fox Sports 1, even declared Griffin as his choice for the top sixth man in the Big Ten.

Elsewhere for the Illini, Kofi Cockburn hit double figures in scoring per usual, but was held to just four rebounds by the long Purdue frontline of Matt Haarms and Trevion Williams. Trent Frazier chipped in 12 points as well, while Ayo Dosunmu was quiet with just six points on 3-11 shooting.

Tradition at State Farm Center holds that Illini fans may not take their seats until both teams have scored, which likely left some in the building with sore legs, as Illinois shut Purdue out until the 13:09 mark past even the first T.V. timeout.

The struggles offensively continued for the Boilermakers all night, as they failed to boast a single double-figure scorer.

“I looked up in the Michigan State game with twelve minutes to go and we’d held them to 34% field goal percentage but we had a night where the ball didn’t go in so I didn’t wanna overemphasize the score in that game,” Underwood said in his postgame interview with Fox Sports 1. “We got dialed in and focused on Purdue and Matt’s (Painter) had one of the outstanding programs in the Big Ten in the last five, six-seven years and there’s nothing easy in this league and Haarms was coming off a 26 point game. I was really proud of our guys and really proud of the effort we showed on the defensive side.”

Overall, the Boilermakers shot 15-60, and were never really competitive on the night.

The biggest gap between the teams on the night lay in bench scoring, as Purdue’s five points from its reserves were greatly outnumbered by the efforts of Griffin, Andres Feliz and Kipper Nichols.

“I don’t ever really worry about the staring five,” Underwood said. “I think the starting five can’t play 40 minutes and you look for production off the bench and guys who can impact the game. Andres Feliz (with) six assists tonight (were) huge. What Alan’s given us has been huge. Every freshman has to grow up and Alan’s now just starting to play with some confidence and we’re starting to see that every day.”

Next up for the now 10-5 Illini is a trip to face Wisconsin in the Kohl Center, a building that is never an easy place to take a win from, regardless of the Badgers record.