Illini snap 15-game losing streak against the Badgers in Madison 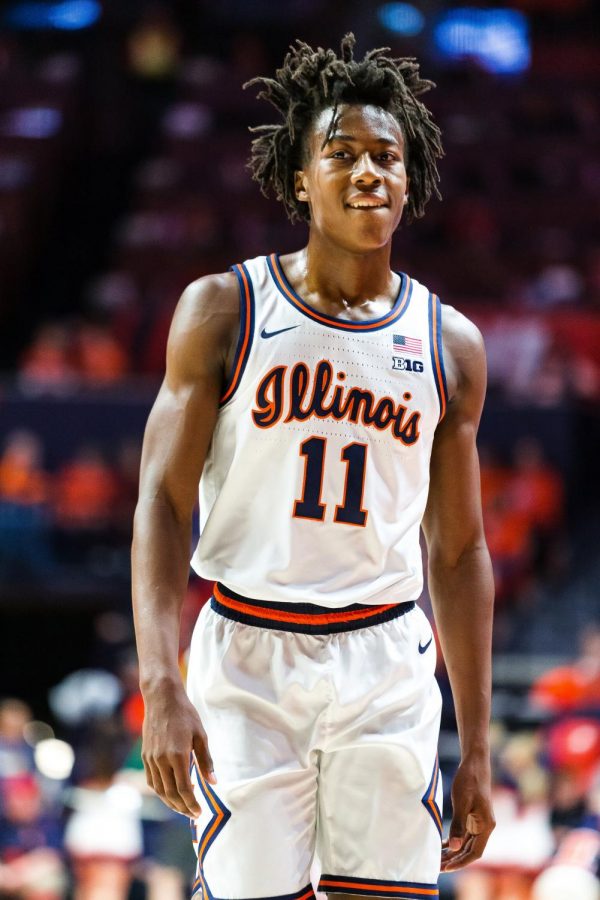 “We hadn’t won against Wisconsin in 3,293 days and that’s been in my mind this whole time preparing for this game,” said freshman Kofi Cockburn. “We came out and played hard and got the win.”

Foul trouble hampered Illinois from start to finish as Cockburn and sophomores Giorgi Bezanishvili and Alan Griffin each had four fouls.

Wisconsin led through the majority of the game, including a six-point lead at halftime. Illinois’ longest time with a lead was just 46 seconds at the end of the second half but stayed within at least seven points throughout the game.

After trailing by seven with 4:50 left in the game, the Illini went on a 10-2 run, ending with a contested three-pointer from junior Trent Frazier off a pass from sophomore Ayo Dosunmu, to take a one-point lead with 1:54 to play.

“Anytime it’s close I count on Ayo,” said head coach Brad Underwood. “We ran a play, put the ball in his hands. He made a nice kick to Trent for a three and they left him. Trent’s been a big shot-maker his whole career as well. Very fortunate to have those guys in our uniforms.”

Dosunmu carried Illinois down the stretch. The sophomore made a layup to put the Illini up 68-67 then hit a three on the next possession to stretch the lead to four points with 46 seconds left.

Wisconsin’s Kobe King, who had 21 points on the night, nailed a three-pointer to close in on Illinois with 22 seconds to play. A tough defensive set on the last possession forced Wisconsin into a contested layup and Griffin came down with the rebound to end the game.

“(Alan’s) three in transition was big, and then obviously his rebounds at the end and then the three off the set was good,” Underwood said. “He just stays in the game. Alan just plays, man. The situation doesn’t bother him.”

Dosunmu led Illinois with 18 points including two three-pointers and two dunks. The guard added five rebounds and six assists for the Illini.

Cockburn and Griffin also stepped up for the Illini with 15 and 12 points, respectively. Despite being limited in the first half, Griffin shot 75 percent from the three-point line. Griffin has been a force off the bench over the last four games, averaging 15.8 points per game.

Illinois will head back to Champaign to host Rutgers (12-3, 3-1) on Saturday. The Scarlet Knights are coming off an upset win over No. 20 Penn State on Tuesday.