Illinois edges past Rutgers 54-51 at home 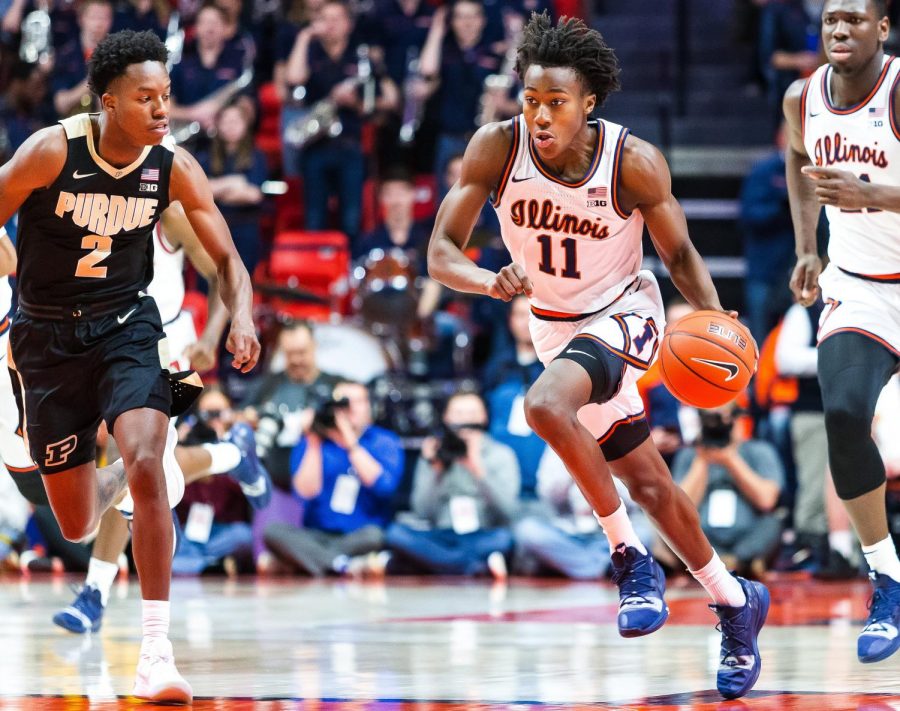 Sophomore Ayo Dosunmu dribbles past a Purdue player during the Illini's game against the Boilermakers at the State Farm Center Jan. 5. Photo by Jonathan Bonaguro.

It’s hard to imagine what “winning ugly” looks like, but a great example was Illinois’ game against Rutgers on Saturday.

The Illini struggled to score all game and never led by more than six points, but eventually shut down a good Rutgers team thanks to sophomore Ayo Dosunmu’s eight clutch points, which pushed the final score to 54-51.

With the win, Illinois (12-5, 4-2) moves up to second in the Big Ten. Illinois has now won three-straight Big Ten games and tied its win total from last year with the win on Saturday.

Illinois had a hard time getting points on the board all game, shooting just 28 percent from the field and 14 percent from deep. The 28.6% shooting percentage was the lowest in an Illini win since before 1979-1980 and was the worst in a Big Ten win in over 10 years.

“Understand, an ugly win is much better than a pretty loss,” Underwood said.

Leading the way for the Illini were two familiar faces: Dosunmu had 18 points, seven rebounds, two assists and was a strong defender all game. Freshman Kofi Cockburn had his seventh double-double of the season, most ever by an Illini freshman, with 11 points and 17 rebounds which ties a freshman record for most rebounds in a game which Cockburn set earlier this year.

The game tipped off at 11 a.m. and both teams seemed tired to start with 15 turnovers between the two programs and a long scoring drought. At halftime, Illinois was shooting 19.4 percent from the field, was 0-7 from beyond the arc, had six turnovers, and trailed 21-18.

The pace picked up in the second half and the Illini finally started to hit open shots and get to the basket. With just under 15 minutes to play, Illinois went on a 10-3 run to take the lead 32-31. From there both teams traded blows back and forth until Dosumno took over at the end. Over the last 1:34, Dosunmu outscored Rutgers 8-5 with six clutch free throws and an isolation layup.

After the game, Dosumnu was asked about his thought process during those clutch free throws and his answer was unsurprisingly very relaxed.

“I’m just thinking about my same routine that I do every day. That makes it very easy,” Dosumnu revealed, “When I shoot my free throws in practice, I shoot the same way for moments like that.”

Illinois next plays at home against Northwestern (5-9, 0-4) on Saturday, January 18.