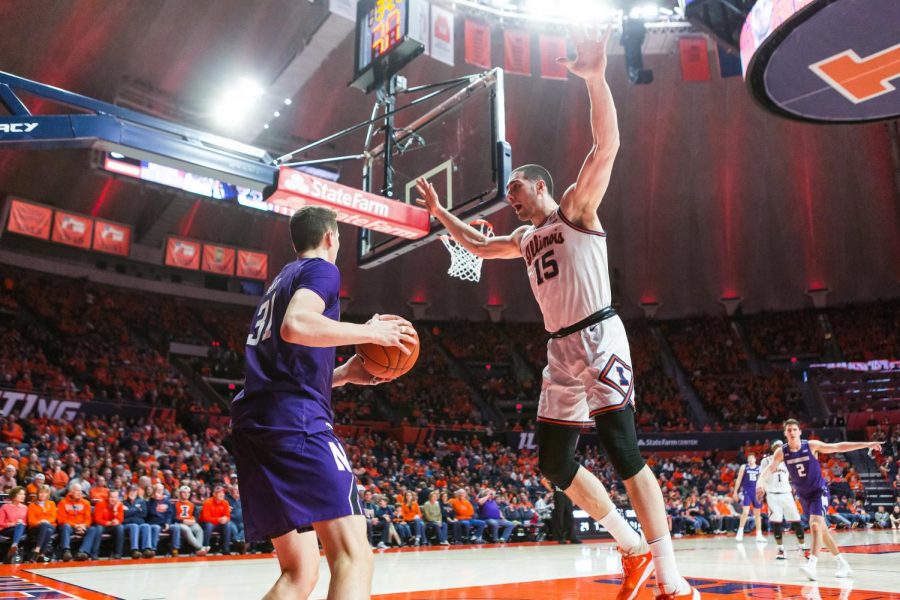 Junior Trent Frazier and sophomore Ayo Dosunmu locked down the win. Along with becoming the 50th member of the 1000th point club, Frazier led the Illini with 16 points, nailing four three-pointers. Frazier added five rebounds and three assists but never turned the ball over.

“It falls on trust. When (Frazier) has the ball in his hands, he makes the right decision and he’s been doing that in practice,” Dosunmu said. “He’s always been poised. And it’s about chemistry — he’s making the right reads, not forcing it, he’s not going too fast and getting the ball where it needs to go. He’s also playing phenomenal defense, so for him to have no turnovers, then still play the way he does on defense shows a big part of our success.”

Dosunmu scored the last four points for Illinois, hitting a contested jumper to push the Illini to a two-possession lead with 18 seconds left. After Northwestern knocked down a pressured corner three-pointer with seven seconds left, Dosunmu was fouled but made both free throw attempts in a one-and-one situation to end the game.

“He’s (Dosunmu) been doing this for two years now, so it’s nothing new,” Frazier. “He hit a bunch of big shots last year. This week we did a bunch of situations; he was making half-court shots. Late game, we know who to go to.”

Both teams came out steady — Illinois shot 52% from the field in the first half while Northwestern shot 46%. The Illini led 38-34 at halftime. The Wildcats continued to hang around but never regained the lead in the second half.

“The first eight minutes I thought were very, very flat, non-energy especially on the defensive end for us,” head coach Brad Underwood said. “We let them get their heads up.”

“They forced us into some problems and then the last four minutes we were able to get some stops and pull away. Then Ayo does what Ayo does down the stretch and that’s ice the game. At the end of the day, there are no upsets in this league anymore and every win is a great win.”

“It feels good, 5-2, second in the Big Ten,” Dosunmu said. “It feels great, just the hard work we’ve put in over the summer and in the fall is paying off. We still have more work to do. We have a huge task coming up, so we’re going to take it one game at a time, one day at a time. We’re going to start at 1:00 tomorrow and try and get better and prepare for Purdue.”

The Illini will travel to West Lafayette on Tuesday in hopes of extending their win streak and holding their spot in the rankings. Purdue (10-8, 3-4) lost to No. 17 Maryland on Saturday night, but won their lost home game, upsetting No. 15 Michigan State.