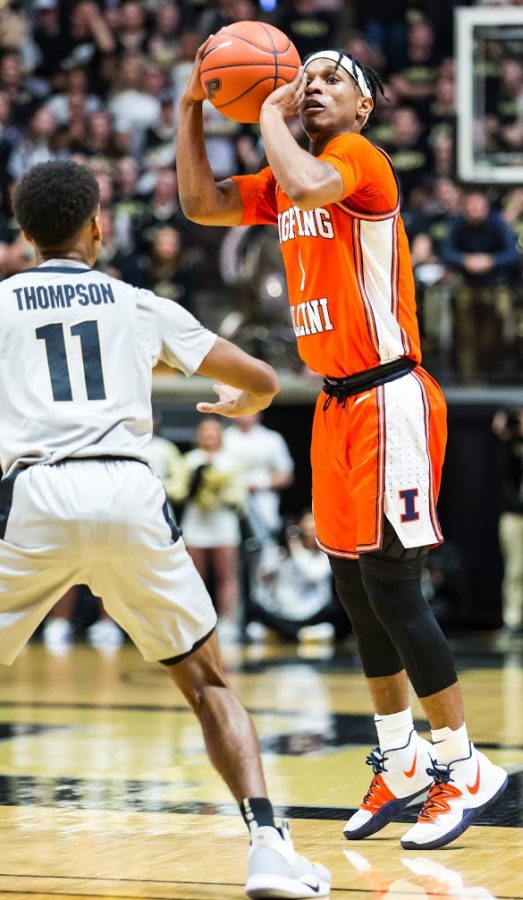 As the Illini looked to extend the lead to close the first half out in Saturday’s 75-71 victory over Northwestern, the ball found its way to junior Trent Frazier on the right wing. Frazier caught the ball and dragged it from side to side to survey his options, then immediately let it go from deep once he saw he had space.

The shot swished about as cleanly as possible, and with it, Frazier entered the 1,000 point club at Illinois. While the scoring accomplishment looks good in the record books, Frazier’s unselfishness has actually been his greatest asset this season.

Though he’s put up buckets ever since he stepped foot on campus in 2017, this season, the Illini actually need Frazier to take smart shots to help preserve leads, rather than let it fly at will to try and cut deficits like in previous seasons.

“Just being more aggressive, coach (Brad Underwood) needed that from me, and that’s what I needed to do,” Frazier said. “I’ve done a great job just balancing (and) taking good shots. I just gotta continue to be more aggressive with the shots that I practice every day.”

A true sign of Frazier’s improvements is evident in the fact that he has not turned the ball over in Illinois’ last six games before Tuesday’s game against Purdue — a stretch that has seen the Illini go 5-1 and enter the top-25 poll for the first time in years.

Despite the fact he may not average many assists, Frazier’s ball security is still a highly valued asset for Illinois as it allows the offense to flow through Underwood’s sets, rather than the clunky, isolation-heavy tempo that was prevalent in the Illini head coach’s previous two seasons.

“There’s an unbelievable push that (Frazier) has and thrust because of his speed when he’s got the ball,” Underwood said. “Teams guard him different in ball screens than they guard Dre (Feliz) and Ayo (Dosunmu) in a lot of cases. Teams fear Trent stopping behind it and shooting it, and now his comfort (with) six games in a row without a turnover, he’s doing a great job of getting us into actions.”

As the elder statesman on a young team, Frazier has been tasked by his head coach to lead the offense, and while that may mean not taking as many shots as sophomore Ayo Dosunmu or freshman Kofi Cockburn, it makes it so a great deal of the Illini’s team success runs through Frazier’s decision making.

And with the Illini currently riding a four-game winning streak, Frazier’s improvements appear to have tangible results thus far.

“I had a little point guard at (Stephen F. Austin), who I think was second in the country in assists to turnover ratio, but I don’t know if he went six games,” Underwood said. “When (Frazier) starts making shots like he did the other day and feels good about that, it adds another dimension. It’s his ship, and he’s running it — it’s pretty comforting as a coach to know that you’ve got that guy out there.”