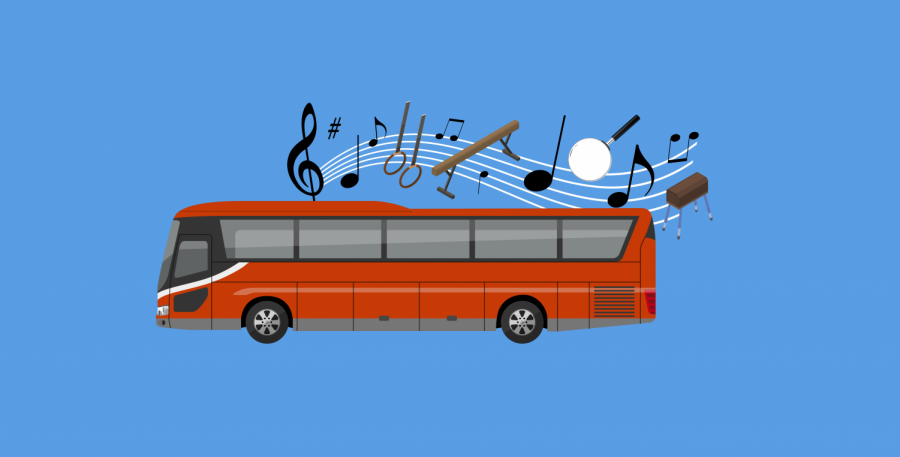 Road trips often happen in the carefree days of summer, when people load up the car and explore places around the country. But road trips aren’t exclusive to summer, and not all road trips are for leisure.

The Illinois women’s gymnastics team often travels to meets; with meets being several hours away by bus, the team has traditions to pass the time and prepare for the meet.

One of the traditions the team has is to listen to music on a speaker. Senior Karen Howell said the team has a few songs that always make an appearance on the playlist.

“When we’re on the bus, there are three songs that we usually always play,” Howell said. “The Lion King remix song, so it’s just like the first probably 20 seconds of the song. So there’s a little dance that goes with it. And then ‘Sad Sad City’ is one, and it’s just everyone’s kind of banging on the walls of the bus to the beat, and then we just sing the chorus at the top of our lungs. And then every year, there’s one song that changes in and out, and we haven’t quite found that song this year, but that song always plays, and we sing the whole thing at the top of our lungs also.”

Despite only one road trip so far this season, the Illini have carried over the pre-meet rituals the team has adopted over the years.

For the first away meet each season, the senior class decorates the bus for the trip. The Illini first traveled to Columbia, Missouri, which is the home of the Missouri Tigers. With the other team’s mascot in mind, the team decorated the bus in a safari-style, and the seniors made a mini-zoo in their travel accommodations.

“This year, we did a safari theme, which was the same theme we had for my freshman year,” Howell said. “Everyone got a cutout animal with their name on it, and then we had leaves and animal prints cut out and put around the bus.”

On the bus, the team had its jam session. Howell said no one has been officially appointed to aux duty for this season yet, but a senior usually is in charge of playing music. However, Howell said aux duty fell to freshman Mia Townes on the Missouri trip as the seniors didn’t bring a speaker.

Despite temporarily deferring aux duties, music is a large part of the senior class tradition in the women’s gymnastics program. Each senior class picks a song for the freshman class, and the freshmen make up a dance for the song. This year’s seniors picked the Lizzo hit “Good as Hell” for the freshmen to dance to.

Dancing is also a portion of the traditions head coach Nadalie Walsh implemented when she took over the coaching job in 2017. Howell said Walsh will occasionally have a team dance-off and often plans surprises for them.

“Everything’s a little bit of a surprise with her,” Howell said.

Walsh has introduced several new things as a coach, but her primary goal has been to balance fun with focus on the meet.

“I really like to give analogies with a trinket that they can keep to remind them of what the message was that they learned,” Walsh said.

After the Illini defeated then-No. 16 Missouri to begin the season, Walsh gave an analogy to stay focused with the help of some knickknacks.

“(I) gave them little tiny plastic dollar store magnifying glasses and just handed to them and let them speak out what they were seeing from this object,” Walsh said.

The following meet, freshman Mia Takekawa scored a perfect 10.0 on the beam.

Though the pre-meet activities are meaningful to the team, freshmen often don’t hear about them until they are en route to the first meet. Howell said she didn’t know about them until her first road trip, similar to this year’s freshman class.

“The seniors had done something on the bus, and they, didn’t tell us what it was,” Takekawa said. “We had to wait outside. And then when we got on, they had decorated the bus, put all our names on the signs so we knew where to sit.”

Both Takekawa and Howell have found their favorite traditions include singing with the team.

Takekawa said one of her favorite traditions is to sing “Alma Mater” with her teammates before the team takes the floor at a meet. Howell also enjoys pre-meet singing.

“The day before the meet, whether it’s a home meet or not, we all sing ‘Oskee-Wow-Wow’ at the end of practice,” Howell said. “It’s really cool to see. This is something we can all come together and do together, and we sing it right before the meet, too.”

Walsh has started many new traditions during her time at Illinois but has found the company to be one of the best parts of her job.

“I love gymnastics, but I love these girls way more than any sport could ever hold that place in my heart,” Walsh said.