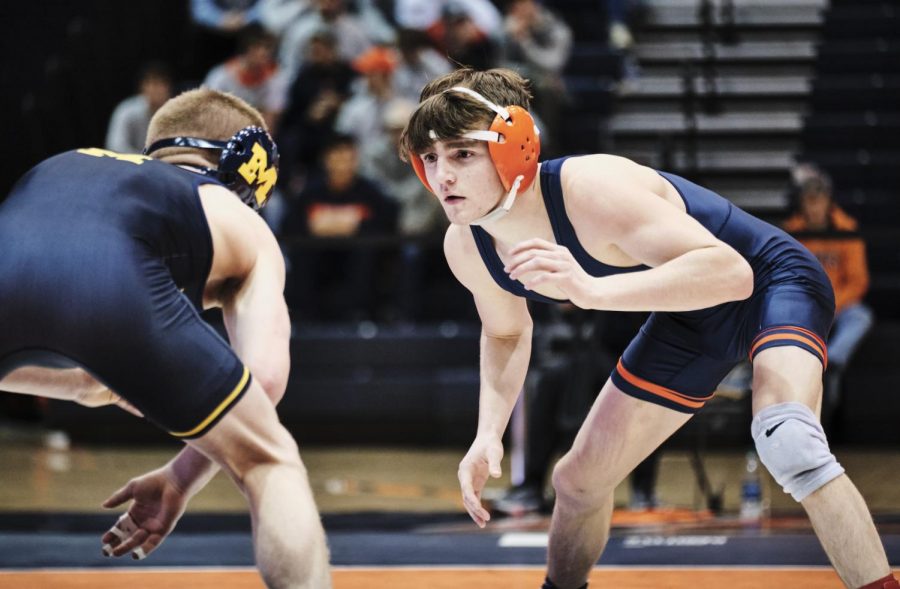 Freshman Justin Cardani wrestles against Jack Medley during the Illinois dual against Michigan at Huff Hall on Sunday.

Illinois freshman wrestler Justin Cardani has an extensive resume of past accomplishments that has led him to compete and succeed, so far, at the college level. A native to Champaign, he has spent his entire adolescence wrestling for his town on the mat.

A neighborhood friend was the first one to introduce Cardani to the sport of wrestling. His family immediately supported his new love for the sport and encouraged him to participate in as many tournaments and competitions as possible.

“With my father taking me all around the country… with freestyle and (Greco-Roman) and all these different styles, it becomes a year-round sport,” Cardani said. “It really helps build each year to get better and better.”

Cardani’s championship titles and victories date back to when the wrestler was seven years old to his final two years at the high school state championships.

Cardani believes wrestling has instilled valuable lessons in him that he has used to become the person he is today.

“When I was little I used to be really shy and then getting into wrestling made me more outgoing, more confident, brought a family around me and helped me just grow as an individual and made me fall in love with it,” Cardani said.

“Going into high school was hard just because I was 20 pounds lighter than everybody else but I still loved going out there and competing and wrestling and just trying to get better,” Cardani said. “I knew as I put the weight on, hopefully, the success would come and it did.”

Despite being under the 106 pounds weight–class as a freshman in high school, Cardani grew into his competition weight and was able to make history for his school, Champaign Centennial high school.

“Honestly, it was just a dream come true to win Centennial’s first-ever state title and then going onto my senior year, doing it again,” Cardani said.

Now, he still likes to be a part of the program at his old high school and do what he can to assist the wrestlers there.

“I go there when I can… help the kids out because some of the kids still there I was on the team with there,” Cardani said.

When Cardani arrived at Illinois, he decided not to compete his first year and attempted to progress as much as he could in strength and skill before this season. Now competing as a redshirt freshman, he said he is proud of all that he has done.

“First-year was fun, it was a great experience… it was just a lot of fun building a team and family here,” Cardani said. “I feel like we have a great team this year, I feel like we are going to do really big things in the future and this year, and I feel that we can do anything that we want to.”