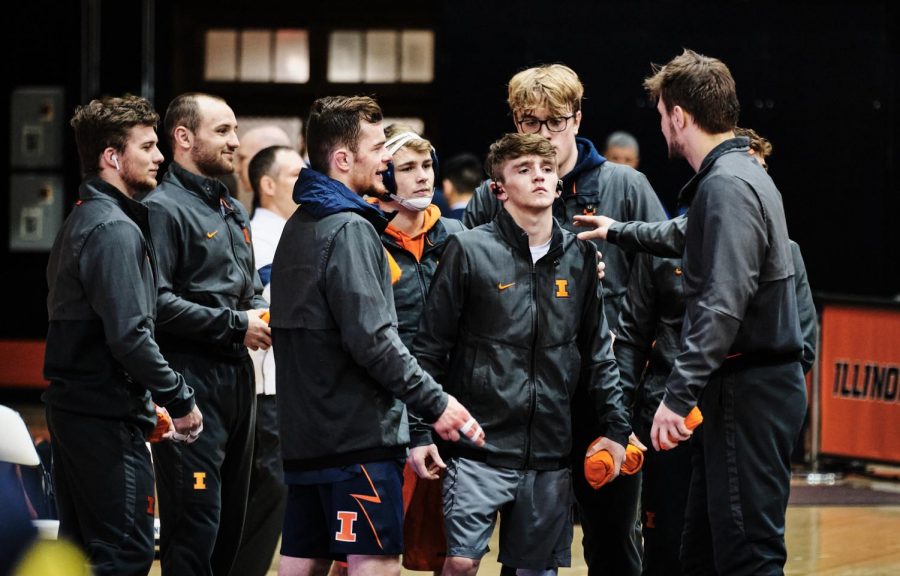 The Illinois Wrestling team cheer for Justin Cardani before his match during the Illinois vs. Michigan dual on Sunday.

Cardani began the meet off with a win by a score of 3-2. Wrestling at 125 pounds, he faced Jack Medley and was able to score a takedown in the first period and hold the lead until the final period had ended.

At 133 pounds, Piotrowski began his match with an immediate takedown of his opponent in the opening seconds of the bout. He continued to score points into the second period and maintained his lead until the match ended with a score of 9-7.

Duncan wrestled at 141 pounds and had a close match where neither wrestler was taken down until the third period. He had managed to take his opponent down and hold him before the match ended with a score of 6-0.

Danny Braunagel scored a series of takedowns throughout his match with Reece Hughes at 165 pounds. He gained a substantial lead to win by a major decision of 10-2. Braunagel was never taken down in the match and showed a lasting ability to put pressure on his opponent.

Gunther wrestled at 174 pounds and competed against Max Maylor. The first period began with a swift takedown from Gunther and another one to set the score at 4-1 before the round had ended. The second period saw a takedown by Gunther, followed by a 4-point near-fall.

“I was going hard for the pin,” Gunther said. “I was trying, but (I) couldn’t quite get both of his shoulders flat.”

Gunther said he believes in treating every match like an intense battle from start to finish.

Zac Braunagel wrestled against Jelani Embree in the 184-pound weight-class. Only one takedown was scored in the first period by Embree. The second period was started off by Braunagel in the down position and escaping to earn 1-point, followed by another 2-points from a takedown.

Embree earned a 1-point escape to even the score at 3-3. Embree started the third period in the down position and quickly earned 1-point for an escape. This left Braunagel behind by 1 point and needing a takedown. The match was approaching its end when Braunagel took a chance and went for a takedown attempt. He was able to lift Embree over his shoulder and bring him to the ground for a successful 2-point takedown.

Embree attempted to escape and even the score but Braunagel once again lifted him into the air, then back to the mat, securing his victory with massive applause from the audience. The final score was 5-4.

The Illini will wrestle against in Huff Hall, facing Michigan State at 7 p.m. on Friday and Northwestern at 2 p.m. on February 2nd.