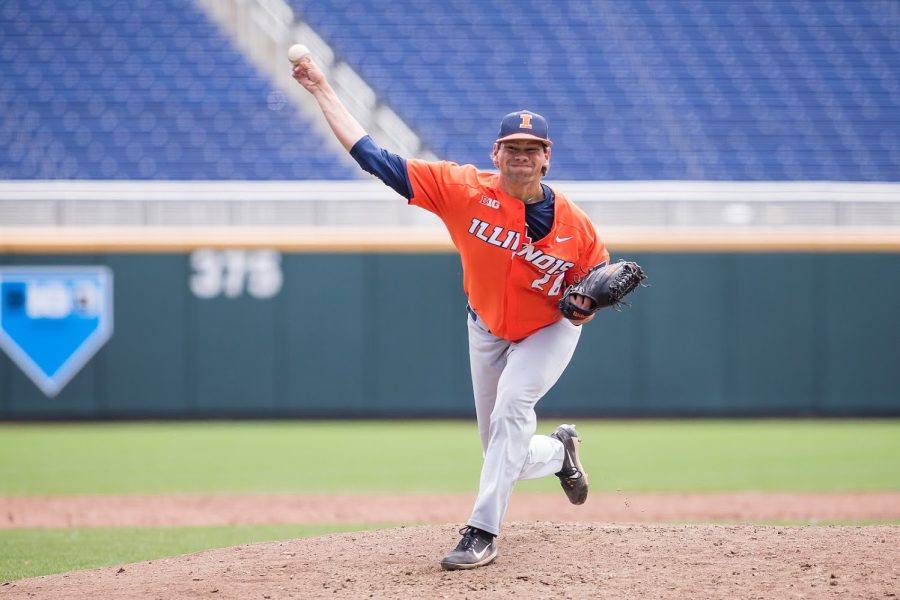 Illinois closing pitcher Garrett Acton throws out a pitch during Illinois’ game against Michigan in the Big Ten Tournament at TD Ameritrade Park on May 23. The Illini are set to start their 2020 season on Feb. 14.

Illinois baseball is almost back.

It’s been nearly eight months since the Illini concluded their 2019 season with back-to-back losses at the NCAA Oxford, Missisippi, Regional, ending Illinois’ second-most winning season since 2000 with a 36-21 record overall and 15-9 in the Big Ten.

Despite less-than-favorable outcomes at last year’s Big Ten tournament — where Illinois lost to Maryland and National Champion runner-up Michigan — and the NCAA Regional, the Illini garnished their 2019 campaign with the best season start since 2015, where the team went on to NCAA Super Regionals and won 50 games.

The former No. 20-ranked Illinois suffered two four-game losing streaks last year, one in post-season tournament play and the other on the road but rallied to finish third in the Big Ten and maintain a top-25 ranking throughout the backstretch of the season.

Although the Illini began regular-season practice on Friday, the team played a three-game exhibition series last fall. The annual stretch of fall ball allows pitchers to throw live and shed off-season rust. The exhibition games typically spill over into extra innings, giving the entire bullpen at least one inning to throw apiece.

The Illini made a collection of changes during the off-season, just in time for the 2020 season set to begin on Feb. 14 with a road trip to North Carolina.

Illinois will face four ranked opponents through its first nine games of the season including No. 18 Wake Forest on opening weekend.

This is the second consecutive season Illinois plays a ranked Wake Forest squad; last year, the Illini defeated the Demon Deacons 5-2 in the second outing of the season, marking their fourth win over a ranked team in two years at the time of the game.

After Wake Forest, Illinois will trek through South Carolina for a three-game road swing then travel to Frisco, Texas, for the Frisco Classic. At the tournament, Illinois will see No. 20 Texas A&M, No. 22 Oklahoma State and No. 14 University of California at Los Angeles.

Illinois baseball received a facelift this off-season, notably turning over half of the 2019 roster, adding 18 newcomers and several new coaches for the 2020 season.

Last year, the program saw seven players sign with MLB organizations, including six draft picks, marking the second-most picks in the draft since nine Illini were tabbed in 2015. But, despite veteran talent migrating away from Illinois in the off-season, head coach Dan Hartleb has taken steps to fill in the gaps and grow young talent through 2020.

Illinois’ incoming talent pool is comprised of 12 freshmen and six transfers including one sophomore, four juniors and one senior. The 2020 roster changes are highlighted by the addition of 11 position players — like freshman infielder Xavier Watson, the younger brother of 2019 draft pick and former Illini Cyrillo Watson —  and seven pitchers.

While the Illini lost titans like Golden Glove winner for second base, Michael Massey, and dependable producers like outfielders Zac Taylor and Jack Yalowitz, underclassmen including sophomores Branden Comia and Aidan Maldonado are stepping up to the plate.

Last season, Comia helped lead Illinois’ offense with a .255 batting average and a .322 on-base percentage, while right-hander Maldonado showcased moments worthy of placing him into the Illini’s weekend rotation in 2020.

Leading the Illini on the mound, however, is returning senior right-handed pitcher Garrett Acton, who elected to forgo the 2019 MLB Draft to stay at Illinois. Acton, who transferred from Parkland College in 2018, registered 19 saves, a 2.33 ERA and a .127 BA last season.

Acton is one of four seniors on this year’s roster alongside starting pitchers Ryan Schmitt and Ty Weber as well as outfielder Nick Menken, who transferred from Virginia Tech with one year of eligibility left.

Before making the move to San Francisco, Allen worked for the Cleveland Indians organization as a scout since 2010 and pitching coordinator since 2018 among other roles. In addition to working with Cleveland’s pitching staff, Allen coached on the field in the Arizona League for three seasons, beginning his coaching stint in the Indians organization in 2014 with the AZL Indians, according to fightingillini.com.

Hartleb said the addition of Allen complements the program’s mission.

“I am extremely excited about the opportunity we have with the hiring of Mark Allen,” Hartleb said, per fightingillini.com. “(Allen’s) knowledge, experience and people skills are off the charts. His past experiences as a collegiate coach, minor league instructor and his most recent position as a pitching coordinator show his great abilities with development and also evaluation in the recruiting process. (Allen) fits in our Illini family in so many ways, starting with the type of person that he is. He will be a great asset to our program moving forward, and I’m extremely excited to get to work with him.”

The Illini also added a familiar face to the coaching staff in former pitcher Quinn Snarskis, who was named a student assistant coach following his graduation from the program in 2019.

Acton’s preseason distinctions follow a fruitful junior-year campaign. Along with setting an Illinois and Big Ten record with 19 saves in 2019, Acton also became Illinois’ sixth All-American in the last five years and the fourth to receive at least one first-team honor. The 6-foot, 2-inch transfer also led the Illini bullpen with 95 strikeouts and a 2.18 ERA.

Hartleb’s decadal honor comes after four NCAA regional appearances in the 2010s — 2011, 2013, 2015 and 2019 — and two Big Ten titles in 2011 and 2015. Under Hartleb, Illinois earned its first National Player of the Year (former first baseman Bren Spillane), two first-round MLB Draft picks and hosted its first Super Regional as well. Three of his former players, Spillane, Kevin Duchene and Tyler Jay, were named to the Big Ten All-Decade team — making Illinois second in the conference with players named to the team.