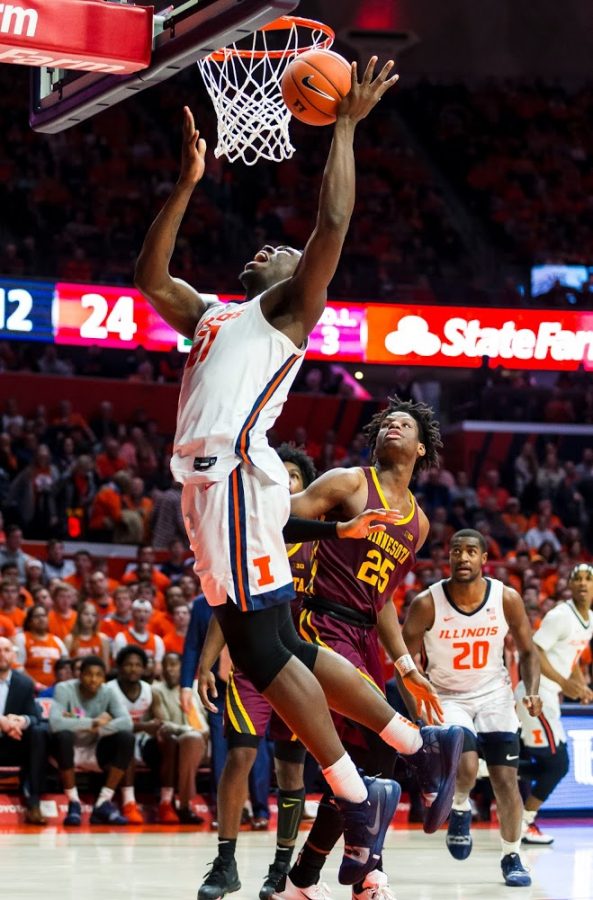 Freshman center Kofi Cockburn attempts a layup during the game against Minnesota on Thursday at the Statefarm Center. The Illini lost the match 59-51.

No. 19-ranked Illinois’ seven-game winning streak was broken on Sunday when Illinois fell to No. 18-ranked Iowa 71-65 in Iowa City, Iowa.

Based on bench points alone, Illinois had the advantage. Illinois’ bench scored 29 points while Iowa’s bench didn’t score at all. The bench points would have made a difference, however, if Illinois’ starters contributed more than 36 points.

The difference in the game was Iowa junior center, Luka Garza. Garza poured in 25 points on 9-16 shooting and grabbed 10 rebounds. The Illini didn’t have an answer for Garza, and their foul trouble caused unfavorable defensive matchups that furthered Garza’s performance.

Senior guard Andrès Feliz led the Illini in scoring with 17 points off the bench. Sophomore guard Ayo Dosunmu and freshman center Kofi Cockburn combined for only 17 points, 11 and six, respectively. This was well below Illinois’ season average of a combined 30.4 points per game.

Despite the Illini struggling with foul trouble throughout the game, losing Dosunmu and Cockburn for stretches in the contest and senior forward Kipper Nichols picking up three fouls a minute and two seconds in the second half, the score was close for most of the game.

Iowa pulled away when Illinois went on a scoring drought that lasted from the 4:03 mark in the second half until scoring a garbage-time basket with four seconds left in the game. The late-game heroics the Illini have been accustomed to since they started their seven-game win streak seemed to fade against the Hawkeyes, which made the difference in the game.

The team will continue what might be the most competitive part of its schedule on Friday when Illinois returns to Champaign to play No. 15-ranked Maryland. Illinois previously lost to by one point in its first meeting with Maryland back in December.