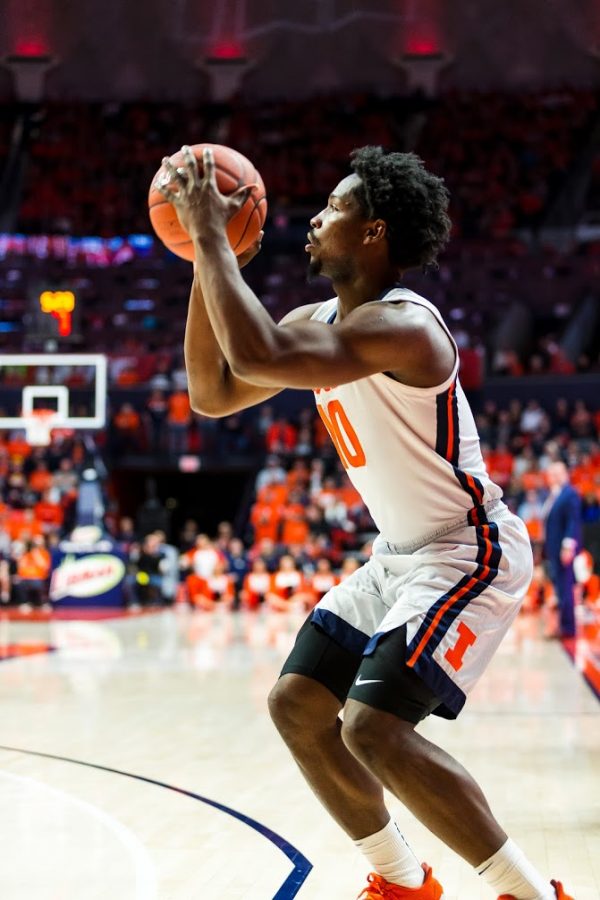 Coming off a loss from No. 18 Iowa that snapped its seven-game winning streak, the gauntlet for Illinois does not get any easier, as No. 9 Maryland comes to Champaign for a Friday night showdown in front of a crowd at the State Farm Center.

The game will likely hinge on two pivotal head-to-head matchups: one at the point guard position and the other down low. The last time the two teams met, the Illini appeared to have a victory, but the Terrapins didn’t back down and stole the game in the closing seconds after several Illini miscues.

Both teams live and die by the play of their star ball handlers. The Terrapins’ senior Anthony Cowan Jr. is coining another standout season to close out a decorated career while Illini sophomore Ayo Dosunmu is leading the Illini with his offensive firepower.

Averaging 16.3 points and 4.2 assists, Cowan Jr. is Maryland’s heart and soul. The senior has been a double-figure scorer his entire career and had a game to remember against Iowa on Jan. 31, as he went for 31 points, six rebounds and six assists on 10-11 from the free-throw line in an 82-72 victory.

When matching up against Dosunmu, Cowan Jr. will likely lean on his shiftiness and outside shooting to try and grab the upper hand, a tactic he displayed in the clutch the last time the two teams met.

To win the battle against Cowan Jr., Dosunmu will need to utilize his isolation playmaking skills and superior height to punish the Terrapin point guard, something he routinely had success with against Michigan point guard Zavier Simpson on Jan. 25, even drilling the game-winning shot with Simpson draped all over him.

Down on the block, both teams possess highly recruited big men that get it done in unique ways.

For Illinois, freshman center Kofi Cockburn eats opponents up in the paint, shooting over 50% from the floor and averaging 14 points and 9.2 rebounds per game. The Jamaica native is fairly limited to the lane, however, as he has attempted just one unsuccessful three-point shot this season.

Maryland sophomore Jalen Smith profiles as more of a prototypical 2020 big man compared to Cockburn, as he does a lot of his damage with his jump shot from mid-range and behind the arc even though he’s 6-feet-10 tall and 225 pounds.

In a narrow 77-76 victory at Indiana on Jan. 26, Smith put up 29 points and 11 rebounds while shooting 4-6 from three-point range. The sophomore has registered a double-double in five consecutive games heading into Friday’s matchup and will potentially test Cockburn’s mobility and endurance as he draws the Illini freshman away from the hoop.

Smith’s career path could be one for Cockburn to emulate since the Baltimore native put up good stats and showed flashes of brilliance as a freshman but was seen as a fringe first-round pick in the 2019 draft pool. Smith decided to return to school and solidify his stock, doing so in the 2019-20 season so far, putting up larger numbers, making his first-round status look like far more likely than if he had chosen to declare for the draft as a freshman.

Smith’s efficiency from the outside will hold the key to who wins the upcoming duel. If he can consistently hit jumpers, Cockburn will struggle to stay on the floor, as was the case in the Dec. 7 matchup, where Cockburn played just 21 minutes.

When the two teams last locked horns, Illinois was in the midst of a disappointing stretch that included losses to Arizona and Miami (FL.) and had fans pessimistic about Illinois’ chances heading into the game.

To the surprise of the consensus, Illinois blitzed Maryland out of the gate and took a 14-point lead into the halftime break. Although the Illini were thoroughly outplayed in the second half, being outscored 34-19, they still looked to be in a position to escape with a victory up seven with under three minutes to play.

But in the end, Illinois could not hold on. An unusual missed free throw from junior guard Trent Frazier gave Cowan Jr. a chance to tie the game with a shot he drained from, what felt like, Washington D.C.

Senior guard Andres Feliz followed with a fumbled dribble after going for a shot to win the game, but Cowan Jr. came out with the ball and drew a foul in the process, going to the line and knocking down the winning free throw with two seconds remaining for a 59-58 Terrapin win.

This time around, the ball will likely be in Dosunmu’s hands should the game come down to the last shot. And, with the way the Chicago native is playing at the moment, it would not be smart to bet against him missing.