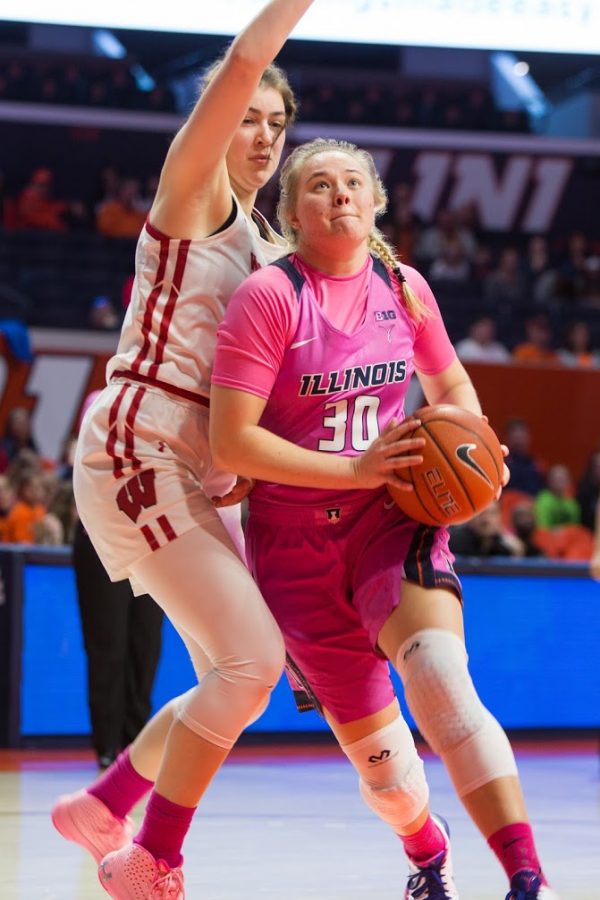 Guard Courtney Joens prepares to jump for a layup during the game against Wisconsin on Sunday. The Illini lost the 73-64.

After coming off of a 73-64 loss to Wisconsin on Sunday, the Illinois women’s basketball team will head back to the State Farm Center to face Ohio State on Thursday night.

The Illini are in the midst of a tough stretch, losing five-straight and nine of 10 games. One of the main factors for this losing streak has been poor shooting. In the last five games, the Illini have failed to shoot above 40% from the field. Head coach Nancy Fahey said she thinks Illinois’ shooting woes are due to the team’s lack of physical size.

“We’re usually playing against some bigger kids, and they have an inside presence,” Fahey said. “When you don’t have a balance of inside out, it hurts you and your shooting percentages since you are relying on perimeter shots.”

Even when the Illini get close to the rim, they struggle. Against Wisconsin, Illinois shot a measly 10-32 in the paint and struggled to get into much of the rhythm attacking the hoop. With an injury to sophomore Mackenzie Blazek limiting her, the Illini seem to be in an even bigger hole.

In order to stretch the floor, the Illini will need to rely on their redshirt junior Petra Holešínská.

On the season, Holešínská has averaged a team-high 13.6 points per game, but her three-point shooting has been a valuable asset of Illinois. Holešínská is shooting 42.4% from three on the season ranking first on Illinois and third in the Big Ten. The last time Illinois won a game was against Minnesota when Holešínská scored 28 points and made nine three-pointers.

The Illini faced the Buckeyes earlier on Jan. 19 when Ohio State won by 30 points. To ensure a different result, the Illini will likely have to limit the Buckeye’s bench as they scored 46 of the team’s 77 points, almost outscoring Illinois as a whole. Illinois will also have to watch out for Ohio State’s 6-foot-4 sophomore forward Dorka Juhász. Averaging 13.1 points per game and 8.7 rebounds per game, Juhász leads the team in both scoring and rebounding. On the other end, the Buckeyes rank second in the Big Ten in blocks per game and fourth in steals per game, causing chaos on the court.

In order to stop the losing skid, Illinois will look for another strong performance from senior guard Courtney Joens. Against Wisconsin, Joens played the entire second-half and scored 16 points on 4-6 shooting from the field. Joens attacked the rim constantly and ended up shooting eight free throws, making seven of them.

After hosting the Buckeyes, the Illini will head on the road where they will face the Penn State Nittany Lions on Sunday. Penn State has struggled this year, amassing an overall record of 7-15, including a record of 1-10 in conference play.