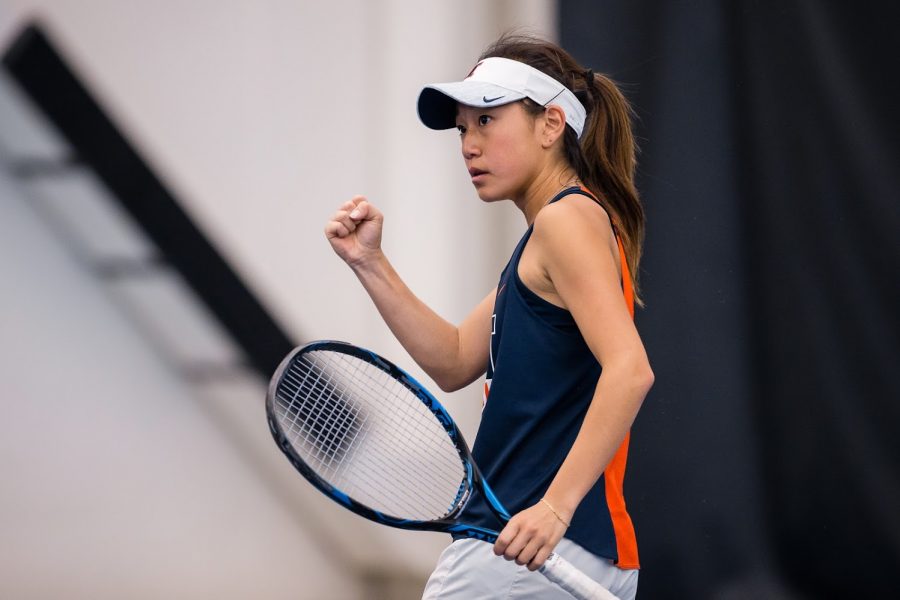 Illinois’ Emilee Duong celebrates during the match against Rutgers at Atkins Tennis Center on Friday, March 29. The Illini won 6-1.

The Illinois women’s tennis team moved to a 3-1 record on the season, as the team defeated Southern Illinois-Edwardsville 4-0 before falling to No. 5-ranked Duke 4-2 in a doubleheader on Sunday at Atkins Tennis Center.

Against Southern Illinois in doubles, Duong and Frazier won, 6-1 and Kawai and Casati won, 6-0. Belaya and Rabinowitz didn’t finish, 3-2.

Despite the eventual loss to Duke, Illinois began the match with momentum, winning the doubles competition, 2-1. Belaya and Rabinowitz earned the team’s second doubles win in dramatic fashion, winning their match 7-6 after a lengthy 10-8 tiebreaker game.

Head coach Evan Clark was pleased with the team’s performance in doubles.

“I was really pleased with our effort today,” Clark said. “We just came up short against the top five Duke team. I was really happy with what I saw. We played great doubles. Doubles were very exciting.”

The Illini weren’t able to maintain their success in singles, however, losing four of five matches against the Blue Devils.

“We got (off) to a good start in singles, and we just couldn’t hold on to some of those matches. We had a few matches that went a little too quick,” Clark said. “We just got outplayed towards the end.”

While the match against Duke didn’t end in Illinois’ favor, the team went on to beat Southern Illinois-Edwardsville later that afternoon. Clark had positive takeaways from the weekend.

“Overall, just a positive day for us,” Clark said. “It came down to a few points against a top ten team, and especially as young as we are, we are excited to keep working and move towards next week.”

The Illini look to continue their strong start to the season at the ITA National Indoor Championships in Chicago next weekend.