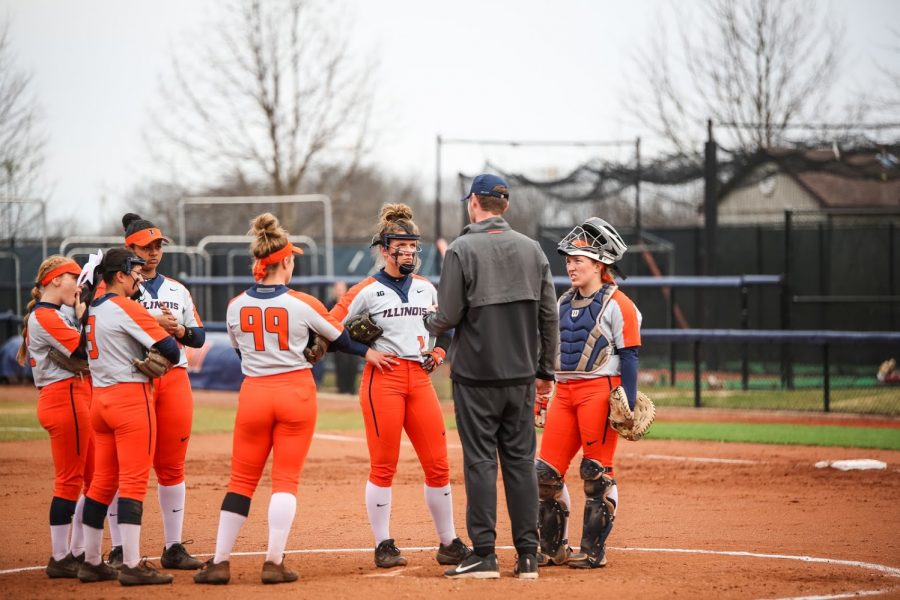 Taylor Edwards speaks to the UIUC baseball coach at the pitchers mound at Eichelberger Field on April 3.

The Illinois softball team will kick off its 58-game season on Friday as Illinois heads to Clearwater, Florida, for the National Fastpitch Coaches Association Leadoff Classic.

Over the weekend, the team will play games against four different schools, including Mississippi, South Alabama and Auburn. The first game will be at 1:30 p.m. Friday against the Liberty Flames.

Liberty University is a private Christian school located in Lynchburg, Virginia, which enrolls more than 100,000 students. The Flames have seen success on the softball field in recent years, winning at least 40 games a season since 2017. The biggest threat the Flames will bring to the plate are seniors Amber and Autumn Bishop. The sisters combined to drive in 70 runs, hitting 15 home runs last season.

The Illini look to get the better of the Bishops and the rest of the Flames Friday afternoon with a unique combination of veteran upperclassmen, rookie freshmen and a few intriguing transfer additions to the squad.

Chicago native and freshman Brianna Nykaza joins Illinois after attending North Carolina State for a semester. As a lefty-hitting utility player, Nykaza attended high school at Whitney M. Young where she holds the single-season record for hits (73), batting average (.658) and doubles (27). Nykaza also brings international tournament experience to the table as she appeared on the Greek National Team for the U22 European Championship in 2018 and again in 2019 for the European Championship held in the Czech Republic.

Another new addition will be Morgan Scivally, a freshman pitcher from Kankakee, Illinois. Scivally was a two-time IHSA All-State honoree in 2016 and 2017.  Scivally will look to help stabilize the pitching staff after notable absences last season. Other additions to keep an eye on include freshmen Jesse Damery, Tori Mcqueen and Breana Shorter, who were all inked to the team on Signing Day back in November.

The Illini will play 23 games before their first home game at Eichelberger Field on March 14 against Bowling Green. The first Big Ten games will be played against Nebraska for a three-game series from March 20-22.