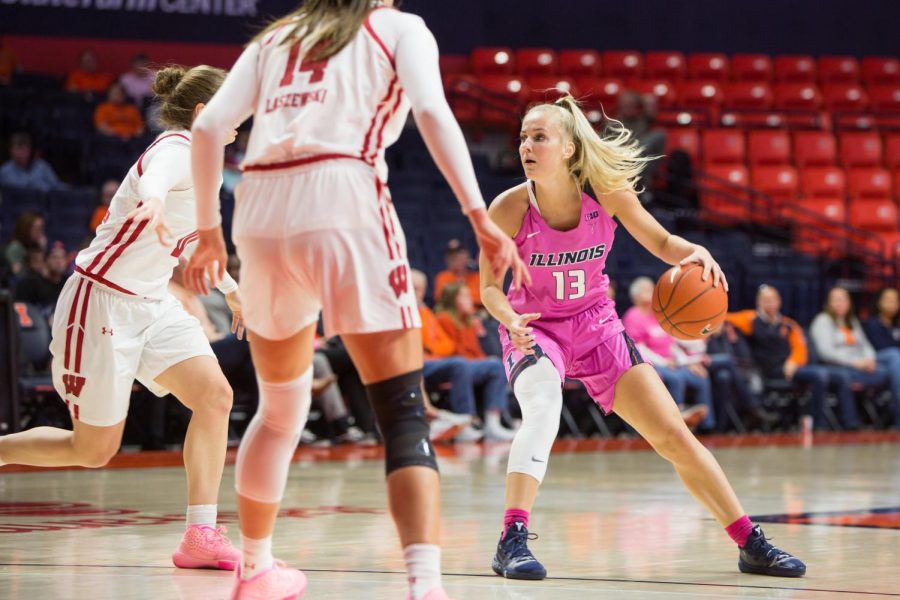 Redshirt-junior guard Petra Holešínská plants her feet during the game against Wisconsin on Sunday. The Illini lost the match 73-64. Illinois extended its losing streak to six games following its loss to Ohio State at home Feb. 13. Illinois fell to Michigan on the road, 70-56, Wednesday night.

The venue change corresponded to a game change as the two teams were tied at the first quarter media timeout, 11-11. Before the timeout, there was a brief 3-point frenzy, with each team sinking two threes. Ohio State guard Madison Greene hit the first three with 8:01 left in the first to begin the three-point streak.

Holešínská responded with a three within the minute, and the teams each had one more three before the 3-point fest came to a close.

At the end of the first quarter, the Buckeyes held a narrow 16-15 lead. Ohio State forward Dorka Juhász led all scorers with 8 points, with six of those coming from behind the three-point line.

In the second quarter, Ohio State took a 26-18 lead before Illinois called a timeout with 7:09 left.

“I feel like we played well overall,” Beasley said. “I was just feeling confident, you know, just taking the shots that I take.”

After the timeout, both teams tied in scoring for the rest of the quarter. Beasley made three 3-pointers in the second and led all players in scoring with 13 points. Illinois was down 33-29, at the half.

Illinois had 62% of its first-half points from behind the arc compared to 45% for Ohio State. Another significant source of points for the Illini was fast breaks, which comprised 34% of the team’s total.

In the third quarter, the Illini outscored the Buckeyes 11-6, in the first five minutes to take a 40-39 lead. The second five minutes was a different story, as Ohio State dominated, outscoring Illinois 13-5.

Juhász was out much of the third quarter with an injury but returned with 1:48 left in the period.

At the end of the third, Ohio State took a 52-45 lead, but Holešínská scored five points to open the fourth.

“We gotta stay confident and take open shots,” Holešínská said. “We didn’t get stops in the fourth quarter, and that’s what mattered.”

After Illinois’ run, the fourth quarter was more like the third. Ohio State led by double digits much of the quarter, and senior forward Ali Andrews fouled out in the game’s closing minutes.

Ohio State outscored the Illini 26-13 in the fourth, and Juhász led the Buckeyes in scoring for the game at 13 points.

“We played tough for three quarters and then, (the) fourth quarter got out of our grasp,” head coach Nancy Fahey said. “We keep (talking) about playing 40, I thought we played  tougher, tough 32, but it’s a 40-minute game.”