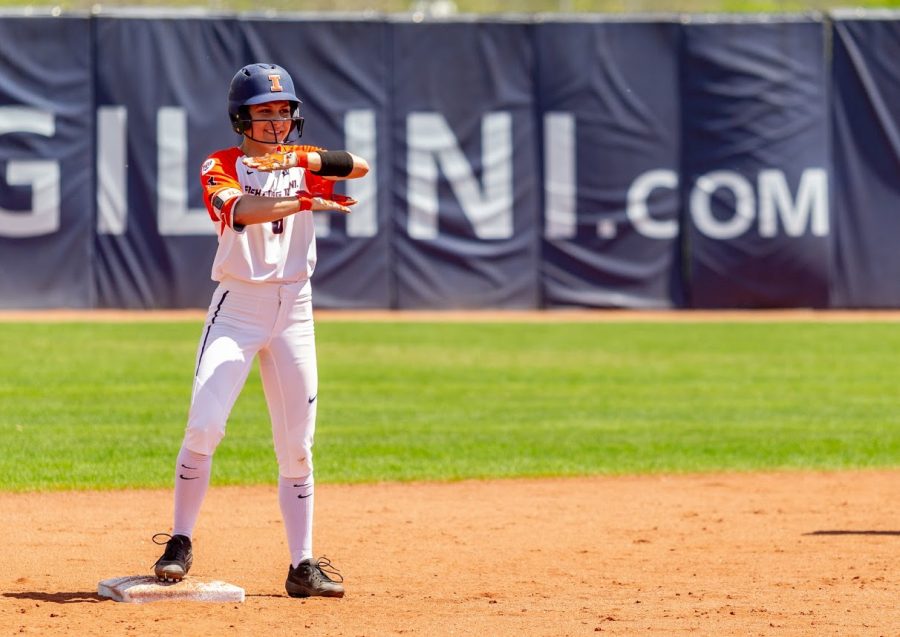 Senior outfielder Kiana Sherlund celebrates a double against Purdue on May 5. Illinois competes against Notre Dame and North Carolina next weekend in Raleigh, N.C.

Illini defeated the Liberty Flames by a final score of 8-2 Friday afternoon to open their 2020 campaign.

Illinois took an early lead after junior catcher Shelby Stauffenberg notched an RBI single to left field, driving in sophomore infielder Kailee Powell, who reached on a fielding error to lead off the inning.

An RBI fielder’s choice by junior shortstop Katie Wingerter drove in the second run of the inning, which was enough to prevent the Flames from taking a lead the rest of the game. Wingerter tacked on another run in the third inning with a sacrifice fly to right field.

All was quiet until the top of the seventh inning when sophomore outfielder Danielle Davis blasted a ball over the wall in left field for a grand slam and the first home run of the young season.

Sophomore Sydney Sickels toed the rubber in the season opener, tossing six shutout innings and striking out three Flames while giving up just two hits to pick up the win.

Freshman Morgan Scivally made her Illinois debut in the seventh inning and started off shaky, giving up a single followed by a two-run homer off the bat of pinch hitter Denay Griffin. However, Scivally settled down to record the outs needed to seal the first victory of the season for Illinois.

In an exhibition game against the U.S. National Team, Illinois was overwhelmed in an 11-0 contest where Kailee Powell’s single to center field was the Illini’s sole hit of the night.

On Saturday, Illinois got back to work and swept two games against South Alabama (5-4) and Ole Miss (3-1). Sophomore transfer Addy Jarvis pitched her first game as an Illini and earned the win after throwing 5.2 innings of one-run ball.

“Addy Jarvis stayed steady in our win over Ole Miss,” said head coach Tyra Perry. “We were able to get hits when we needed them to secure the game. We were not as fundamentally sound on offense or defense as we needed to be in the South Alabama game. Sydney Sickels came in strong to give us a boost for the win.”

Sickels was brought in to finish off the sixth inning and lock down her first save of the season in the seventh. Powell and sophomore second baseman Avrey Steiner batted in two of Illinois’ three runs. Steiner was three-for-three on the day and leads the team with eight hits in just 11 at-bats.

The South Alabama Jaguars fought the Illini back and forth in their contest Saturday evening when junior Bella Loya started her first game and paced the offense with three hits and 2 RBIs.

The Jaguars scored three runs off of senior Akilah Mouzon in the first inning, but the Illini took it right back in the third with RBI singles from Loya, Stauffenberg and Davis, respectively. Both teams grabbed runs in the fifth but the Illini held on in the 5-4 win behind clutch relief pitching from freshman Taylor Murray and Sickels. On Sunday the Illini also defeated No.23 Auburn 2-0 in Clearwater Florida.

Illinois travels to Raleigh, N.C., next weekend to compete against Notre Dame and North Carolina State at the Big 10/ACC Challenge.