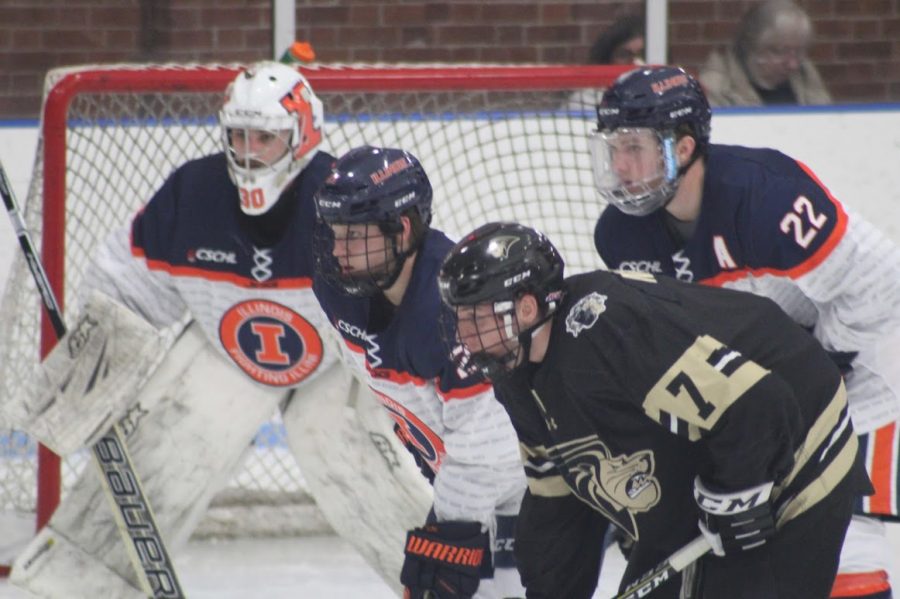 Illinois defenses Tyler Opilka (22) and Joe Nolan (27) defend the goal during the Illinois vs. Lindenwood game at the Ice Arena on Friday, Jan. 18, 2019. Illinois lost 2-1. Illinois will play Alabama this Friday and Saturday.

With time running out, Illinois knew it had to get aggressive to pull off the upset.

With only a few seconds remaining, senior defensive man Chance Homerin avoided the Lindenwood defenders and made the perfect pass to freshman phenom Zach Hayes, who scored the goal with only six seconds remaining. With the hometown crowd going wild, there was only one problem: they were still down by one.

The Lindenwood Lions were able to win the face off and play keep away in the final seconds, escaping with a 2-1 victory over Illinois.

Playing host to the No. 3 Lions in a top 20 battle Saturday night at the Big Pond, the No. 17 Illini and their fans came out rocking, hoping to break the Lions’ streak of dominance against the Orange and Blue. While the game wasn’t a blowout like their previous two meetings with the Lions, which they lost by a combined score of 12-1, the Illini’s failure to cash in on shots-on-goal ended up being their undoing.

The first period featured intense defensive play and remarkable goalie play by both squads, with Lindenwood junior goalie Cooper Seedott stealing the show, something he is used to doing when playing the Illini. In the first period alone, Seedott saved eleven shots, which kept the home crowd from bursting into cheers.

“I thought we did a good job of playing the way we wanted to play,” Illinois head coach Nick Fabbrini said. “It was unfortunate to not get rewarded for the first period with a lot of good chances, but I told them that happens against really good teams.”

The second period got even more intense with a two slashing and three roughing penalties called on the two teams. Even though each team had advantage in numbers at times, both defensives stood tall for most part.

“I don’t think we like each other,” Fabbrini said regarding the physicality. “That’s just how the game goes. We played really hard.”

With another scoreless period between the ranked teams looking inevitable, Chicago native and Lindenwood junior forward Zach Mitchell took matters into his own hands, scoring on an unassisted goal to give the Lions a 1-0 lead heading into the final period.

Knowing that there was only one period to go and needing a goal to avoid a loss in regulation, the Illini struggled to generate any offensive momentum, registering only five shots-on-goal the entire period compared to the Lions’ twelve. The Lions, after continuing to put themselves in position to ice the game, finally capitalized with 7:41 remaining to push the lead to 2-0.

“We got cleaned on the drawl and it was a great shot.” Fabbrini said about the game deciding goal. “(Illinois senior goalie Jake Barnhart) Barney never saw it and you just have to tip your hat on that one”

Despite the Illini scoring with six seconds remaining, all that really meant was keeping Seedott from securing another shutout. After the game, the #3 Lions improved to 18-7 on the season while the Illini fell to 17-8-4. Fabbrini, though, was proud of his team’s performance against their bitter rival.

“The key for us is repeating this kind of effort,” Fabbrini said. “This was our best performance of the semester against the best team we’ve this semester.”

After the Lindenwood series, Illinois plays host to the Alabama Crimson Tide, who they’ve already beaten twice this season in Tuscaloosa.