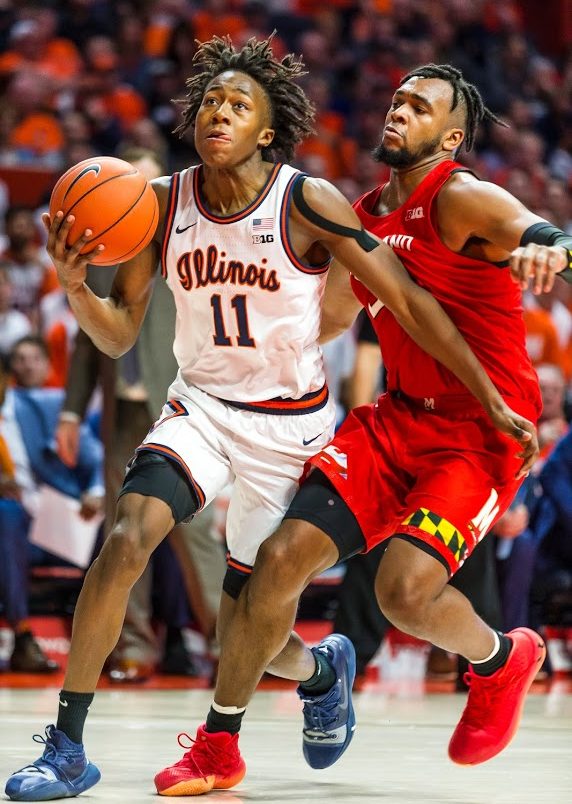 Sophomore guard Ayo Dosunmu drives toward the basket with pressure from Terrapin sophomore guard Eric Ayala during Illinois’ game against No. 9 Maryland Friday. The Illini lost 75-66.

It’s been over a year since Illinois rattled the Big Ten with a surprise victory over No. 9 Michigan State, but the euphoria woven into every detail of the upset has been ever-present throughout the 2019-2020 season.

While this year’s Illini have made it commonplace to outplay top-25 teams – omitting No. 9 Maryland’s 76-55 victory at the State Farm Center Friday – Illinois went into last year’s matchup against a ranked Michigan State team as a bona fide underdog.

But in a dramatic turn of events, Illinois dominated the contest. The Illini owned the lead for a majority of the contest, playing in front of the Spartans for over 34 total minutes by as many as 14 points to clinch a 79-74 victory at home.

Last year, freshman guard Ayo Dosunmu led the Illini, racking up 24 points including a pair of threes late in the second half to seal the upset for Illinois. Freshman big-man Giorgi Bezhanishvili, sophomore guard Trent Frazier and junior guard Andres Feliz scored double digits during the game, helping to boost the Illini to their victory over a top-10 opponent since 2013 as of Feb. 5, 2019.

Illinois’ defense swarmed Michigan State, forcing the Spartans to turn the ball over 24 times and finishing with a 28-6 advantage in points off turnovers.

The Illini’s on-court performance created an atmosphere at the State Farm Center aligned more to the success seen by this season’s squad. Illinois fans and the Orange Krush stormed the court, head coach Brad Underwood donned the historic Illini orange jacket and players were decked out in throwback jerseys to pay homage to the 2005 Illini squad that reached the Final Four.

At the time of the upset, Illinois was a stranger to elongated winning streaks and signature victories. Fans were parched for a reason to celebrate, especially at the State Farm Center. But little did they know, nearly a year later (almost to date), the arrival of freshman center Kofi Cockburn and the maturation of seasoned players would pool together in harmony and evolve into a team worthy of March.

While Michigan State yields lethal offensive weapons in senior guard Cassius Winston and junior forward Xavier Tillman, who scored 21 and 19 points respectively during the Illini’s loss to the Spartans on the road Jan. 2, Illinois leans on its marginal size advantage and lineup punctuated with a true post player.

However, during the teams’ last meeting in January, Michigan State produced a much more efficient offense, shooting 43.3% from the field compared to Illinois’ 29.3%. Both teams were nearly even in total rebounds, although the Spartans posted more defensive boards than the Illini, turnovers and fouls. The first half was littered with physical play and consequential fouls. Underwood was also slapped with a technical for arguing with officials.

This week, the Illini and Spartans meet for the second time this season. Illinois dropped its most recent contest to No. 9 Maryland at home Friday night and moves to 16-7 and 8-4 on the season, while No. 16 Michigan State (16-8, 8-5) fell to Michigan, 77-68, Saturday.

Fine-tuning gaps during transition and eliminating opportunities along the perimeter are focal points for Illinois following its second-straight loss Friday.

“One thing we talked about at length was transition with Maryland, especially (Aaron) Wiggins,” Underwood said. “Wiggins had two clean looks at threes at the end of the half, that changes the game. That changes the momentum.”

After sharing the top spot in the Big Ten for several weeks, Illinois now sits in third place while Michigan State drops to fifth in the conference.  The Spartans return to the State Farm Center for the first time this season to play in front of a sold-out crowd Tuesday. Tip-off is at 8 p.m.