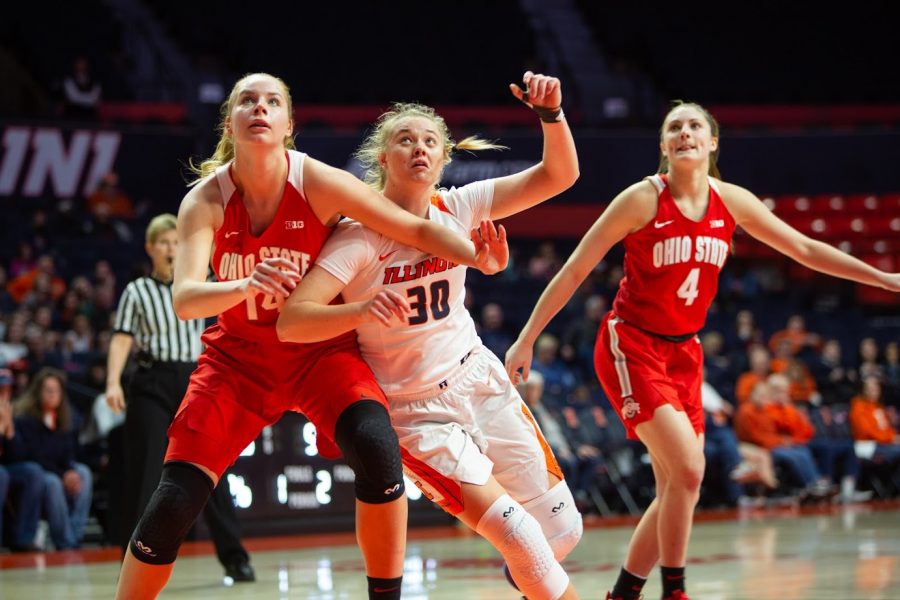 Courtney Joens goes for a rebound during the Illinois' game against Ohio State at State Farm Center on Thursday.

The Illini were led by redshirt-junior guard Petra Holešínská’s 28 points and five rebounds, as well as freshman forward Kennedi Myles who had 14 points nine rebounds and two steals.

A key to the Illini’s success was Holešínská’s three-point shooting. She led the team with four three-pointers and made her 150th as an Illini, a significant milestone for the Vracov, Czech Republic, native.

“I’ve spent a lot of time and worked really hard for this,” Holešínská said. “Especially last year when I was hurt, I was trying to improve my shot and my range, so it definitely means a lot.”

In the second quarter, the game started to flip, and the Nittany Lions continued to cut the Illini’s once double-digit lead. With Illinois struggling to shoot and unable to make anything from the perimeter, Penn State would go into the half down just two points. If it weren’t for the Illini’s ability to get the line and make free throws in the second quarter – Illinois was 7-8 from the free-throw line – the Illini would’ve likely relinquished the lead. But, the Illini took a 32-30 lead going into the half.

The third quarter became a slugfest as both teams combined for just 25 points and only one three-pointer. The Illini shot just 31% from the field in the quarter, but the Nittany Lions couldn’t match them; Penn State shot a measly 18% in the quarter. In spite of the lackadaisical offensive showing coming out of the half, Illinois was up 47-40 heading into the final quarter.

But back came the Illini, and with 1:51 left in the game, Illinois had the ball, down one. Senior forward Ali Andrews drove to the rim before having her layup attempt blocked. Illinois rebounded the miss and Holešínská responded with a three-pointer to give the Illini a 68-66 lead. Penn State turned the ball over and missed a game-tying layup before Holešínská was fouled to ice the game, snapping the Illini’s six-game losing streak.

“We battled, there were a couple times we gave up some shots that we shouldn’t have, but at the end of the day we locked down,”  Myles said.

Illinois returns home to face Indiana Thursday and Purdue on Sunday before heading back on the road.