No. 22 Illinois comeback slips away in final seconds against Michigan State 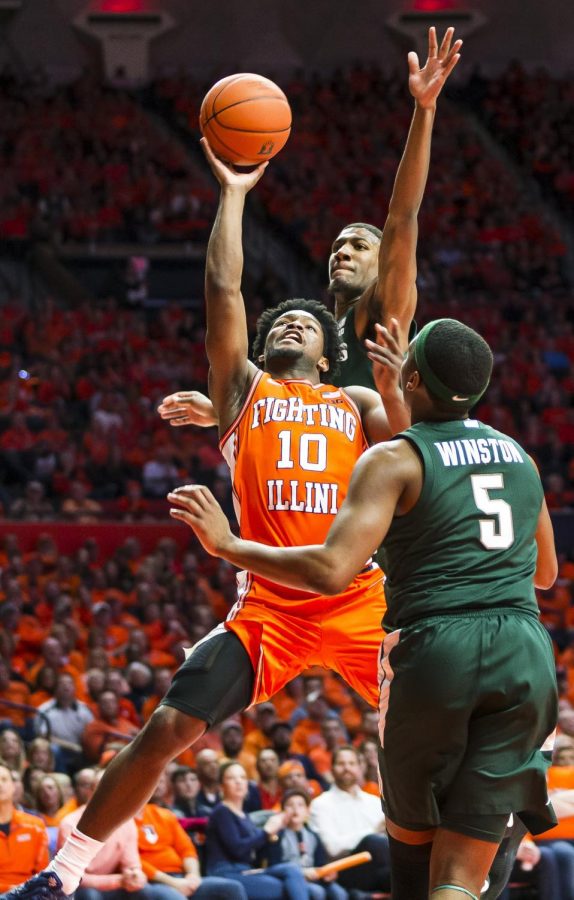 It was a tale of two drastically different halves Tuesday night, but in the end, No.22 Illinois came up short, 70-69, at home against Michigan State.

The Illini were blitzed straight out the gate, falling behind 8-0 before sophomore Tevian Jones broke the scoring seal.

“I have yet to figure out why we can’t play hard,” Illinois head coach Brad Underwood said. “Our team walked in before the game and I literally asked the (assistant) coaches after they left ‘are we ready?’ because it was almost like a somber funeral. We played like it in the first half.”

Michigan State kept its foot on the gas pedal after jumping out to the early lead, going up by as many as 19 points before taking a 37-20 advantage into the halftime break.

Freshman guard Rocket Watts was sensational early on, putting up 14 points in the first half of a surprise starting assignment.

“When he (Watts) sees one ball go in, that (basket) looks like a 55-gallon drum, but he’s got one assist in their last five games, and we told our guys that when he gets it and goes, he is never passing it,” Underwood said. “And yet, we were late to adjustments, you can’t help off of him. He got a couple buckets going that way, and he had a huge night, he hurt us.”

The Spartan beatdown ratcheted up as the game headed into the second half, as Michigan State extended the lead to as many as 20 points before the first television timeout.

The Illini began to show signs of life, however, making a mini 7-0 run and cutting the lead down to 11 coming out of the break. But the Spartans quickly killed the momentum, responding with a 6-0 run to push the lead back up to 17 by the next timeout.

Halfway into the period, Illinois made a run to cut into the lead, as a 10-0 run crunched the Spartan lead to seven, prompting a timeout from Michigan State head coach Tom Izzo as the State Farm Center crowd rose to its feet.

Coming out of the Michigan State timeout, Illinois continued to surge, as senior Andres Feliz snatched an offensive rebound away from the Spartans’ Foster Loyer to make the score 60-55 heading into the under-eight minute break.

The Illini weren’t done either, going on a 6-0 run after the timeout to grab their first lead of the game, 61-60.

“I have no idea (about) the slow start, we have a really bad habit of doing that,” freshman center Kofi Cockburn said. “The second half we just went to the locker room, we got a few words from coach telling us that we got to stick together and elevate the guy beside us. We just came out there and we did what we do best: we played together, passed the ball and communicated on defense.”

The final four minutes of the game were frantic, as the teams traded the lead back and forth with the game coming down to its conclusion.

Sophomore guard Ayo Dosunmu looked to have an open dagger layup to win the game, but his shot fell off the rim.

The Illini corralled the rebound, however, and freshman center Kofi Cockburn got fouled and drilled both free throws to give Illinois a one-point lead as the game came down to a final possession.

“We never allow a reject, we always adjust our feet,” Underwood said. “Kofi made the right call (when) Cassius (went) in and out and got Trent a little off balance and then got downhill. When that happens, it’s supposed to be an automatic switch, and Kofi would’ve taken Cassius and Trent slides and takes Tillman and tries to sit on his leg, but instead, both went with the ball.”

Although the game was over, attention immediately turned to the Illinois sophomore, whose body sat curled up on the ground as members from both teams gathered around while the Illinois training staff rushed to his aid.

“I hope Ayo’s okay, I really do,” Izzo said. “He’s a great kid and a great player. Prayers are out to him.”

Although the comeback effort was valiant, Illinois couldn’t contain Watts, as the freshman finished with 21 points. Aside from the game-winner, Tillman was reliable all night, scoring 17 points and grabbing 11 rebounds. The Illini are hoping for the return of Dosunmu without major injury, as the sophomore was the catalyst of the Illinois resurgence, scoring 17 points to lead the way.

Illinois next takes the floor at Rutgers Feb. 15.