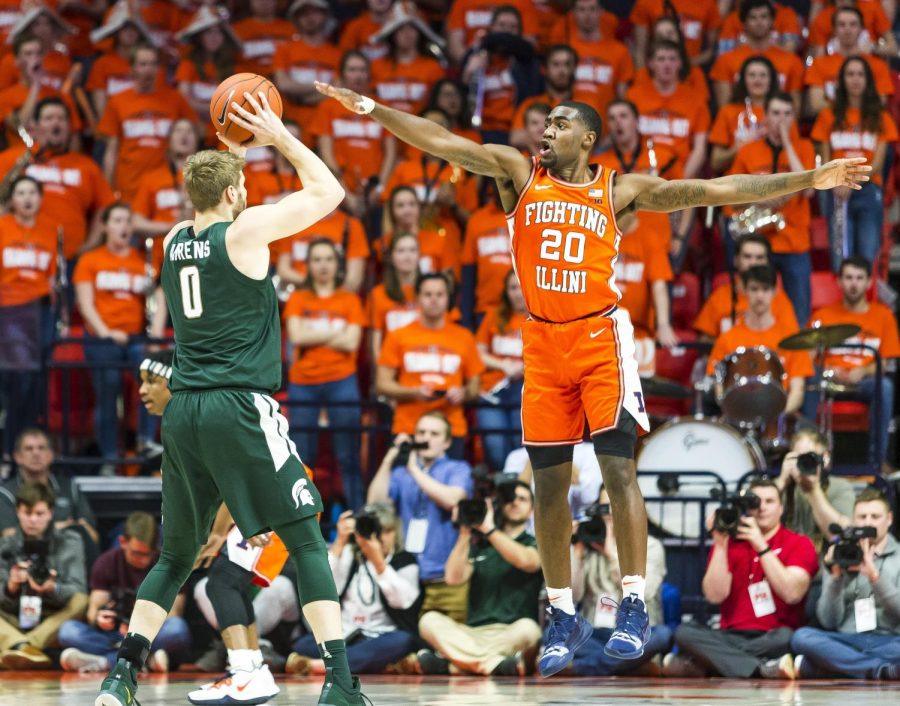 No. 22 Illinois fell to Michigan State 70-69 on Tuesday night at State Farm Center. Illinois came out flat on in the first half, shooting just 25% from the field and 18% from behind the arc. However, Illinois clawed back from a 20-point deficit in the second half to take the lead in the second half. Junior Spartan forward Xavier Tillman slammed a putback dunk with just six seconds left to give Michigan State the victory.

Going into the game, the junior point guard looked to be assertive on the offensive end and make smart shots, but he did neither on Tuesday night. Trent Frazier went 1-8 from the field and missed a pair of three-point attempts.

He was guarded by senior Spartan guard Cassius Winston for most of the night, when in attack mode. In games, Frazier struggles offensively and his defensive performance has typically been enough to raise his grade, but not Tuesday night. Frazier struggled to stay in front of Winston, who finished with 12 points.

Frazier was also partly responsible for Tillman’s open path to the rim for the putback dunk in the last play of the contest. Illinois head coach Brad Underwood said  Frazier was supposed to slide down and guard Tillman after the Spartans set a screen on Frazier, which was designed to get Winston free while freshman Kofi Cockburn’s assignment was to switch onto Winston. Frazier didn’t perform to expectations when Illinois needed him.

On the last play of the game, sophomore guard Ayo Dosunmu slipped while trying to cut to the basket, potentially injuring his left knee. However, an MRI conducted Wednesday afternoon revealed no major structural injury, but there’s no timetable for Donsunmu’s return to the court this season.

The injury overshadowed a solid game for the Illini sophomore. Dosunmu finished with 17 points on 41% shooting and nine rebounds. Dosunmu was his best in the second half, scoring 15 points and snagging five rebounds. Dosumu struggled to contain Michigan State freshman guard Rocket Watts. Watts posted a game-high 21 points on 9-14 shooting.

Junior guard Da’Monte Williams splashed two more threes on Tuesday night after making a pair against Maryland on Friday to end a nine-game scoreless streak. Underwood said he wanted to get Williams more opportunities in the second half, but liked the group on the floor that led the 20-point comeback. Williams made several of shots to force Michigan State’s defense to step-out and guard him, opening the offense and creating space. Williams grabbed three defensive rebounds on the night and continued to play consistent defense for Illinois.

Compared to last season, the sophomore forward looks like a totally different player. Last season, Giorgi Bezhanishvili had a golden touch at the rim offensively and his footwork allowed him to create space and move more freely with the ball in his hands.

As a sophomore, however, Bezhanishvili has no rhythm offensively and consistently gets beat on defense. Bezhanishvili missed his first six shots from the field and went 0-3 from deep, all of which were poor shot selection. Bezhanishvili started the second half on the bench for the Illini, marking the first time he hasn’t started both halves this season. Underwood said Illinois needs Bezhanishvili, but he needs to be better offensively, defensively, and on the glass or could see his playing time sliced.

The freshman center finished with 11 points and eight rebounds and made two clutch free throws to give Illinois the lead with just 19 seconds left. Cockburn only attempted six field goals, which isn’t enough.

Cockburn doesn’t have good hands, as he struggles to corral some entry passes and grab some easy rebounds on the offensive glass. Illinois needs to give Cockburn more opportunities at the rim in big games. According to hoop-math.com, 60% of Cockburn’s field goal attempts come at the rim and his field goal percentage is 70.5% on those shots. But despite struggles with solid ball-handling and passing, Cockburn has a four-inch height advantage and 45-pound weight advantage, which should award him with more opportunities in the paint.

You could have won a lot of money if you thought Tevian Jones would be the first Illini player off the bench and the first to score for Illinois.

The sophomore guard buried a three at the 16:12 mark of the first half. Underwood said Jones is making fewer mistakes and has been playing better in practice. The numbers speak to that as well, with Jones making 1-2 from deep and grabbing a pair of rebounds. When playing to his potential, Jone provides something this Illinois team doesn’t have – a long, athletic player who can provide some spark off the bench.

The senior forward totaled just over four minutes of playing time on Tuesday night against the Spartans. Nichols didn’t get into the game in the second half, which has to do with Underwood leaving his comeback kids in the game as they chipped away at a 20-point deficit. Nichols didn’t hurt the Illini on the defensive end, but he did take a poor three in the first half that clanked off the rim. Nichols finished with just two points and one rebound in his four minutes of action.

Even though Illinois has lost three consecutive games, Feliz deserves little blame in the losses. Feliz is averaging close to 15 points a game in the last three for Illinois, but he’s also active on the glass grabbing four rebounds on Tuesday night.

Underwood said Illinois has been experimenting with smaller lineups more frequently in practice as of late. Sophomore guard Alan Griffin started the second half in place of Bezhanishvili and took advantage of his opportunity. Griffin poured in seven points and snatched five rebounds.

Griffin plays hard and with a special kind of swagger that contributes to Illinois’ ability to stay in tough games. Griffin carries this role due to his work ethic and desire to dive on the floor and fight for rebounds. Griffin could see his role greatly increase if Dosunmu is forced to miss time with a left knee injury, and it will be interesting to see how he handles potentially increased expectations.

The freshman center saw 2:10 of playing time at the end of the first half when Cockburn and Bezhanshvili were on the bench with a pair of fouls each. Hamlin didn’t register a stat in his short amount of playing time.