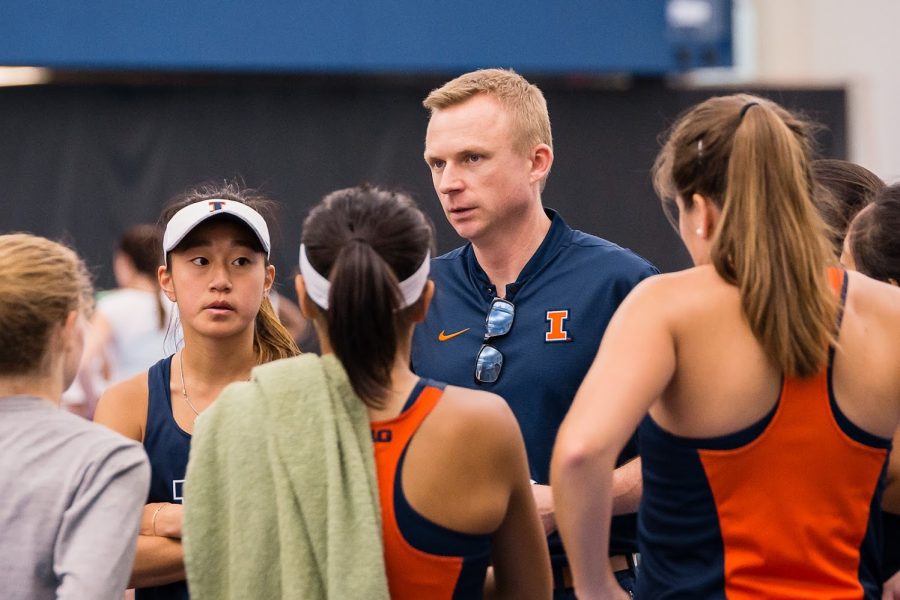 Illinois head coach Evan Clark talks to his team during the match against Rutgers at Atkins Tennis Center on Friday, March 29, 2019. The Illini won 6-1.

The team moved to 3-4 on the season. All four losses have been against top-10-ranked teams.

“We played against the best competition in the country the first two matches,” said head coach Evan Clark. “The first two matches were against top five teams and the last match a top-10 team, so we’re getting unbelievable experience and playing the best of the best. Certainly, it’s a tough situation, and we would love to be pulling out these matches.”

Despite the losses, there was quite a bit to take away from the weekend’s matches.

“I think it’s going to make us tougher down the stretch and shows us what we need to do to be one of those teams,” Clark said. “We’re putting ourselves in good situations, for the most part, in all three matches, and now, we have to figure out how to be consistent and figure out how to pull some of those bigger matches out when we do play top-10 teams.”

Looking forward, consistency is a major area for improvement according to Clark. The team had strong individual moments but could not string them together for entire matches. Consistency is especially important in matches against top-ranked teams, which have been difficult for Illinois so far this season.

“We got the bad starts against Texas, and then, we made a really good push where we felt like a couple points here and there, and we won that match,” Clark said. “The opposite thing happened against Michigan yesterday, where we got to some really good starts in singles, let off the gas a little bit and then went downhill quickly after that. So we’ve got to figure out how to be consistent mentally and keep our level up for an entire match, not just pieces at a time.”

Illinois will get a chance to turn things around on Friday and Sunday during its first road matches at Texas A&M and Baylor, respectively.