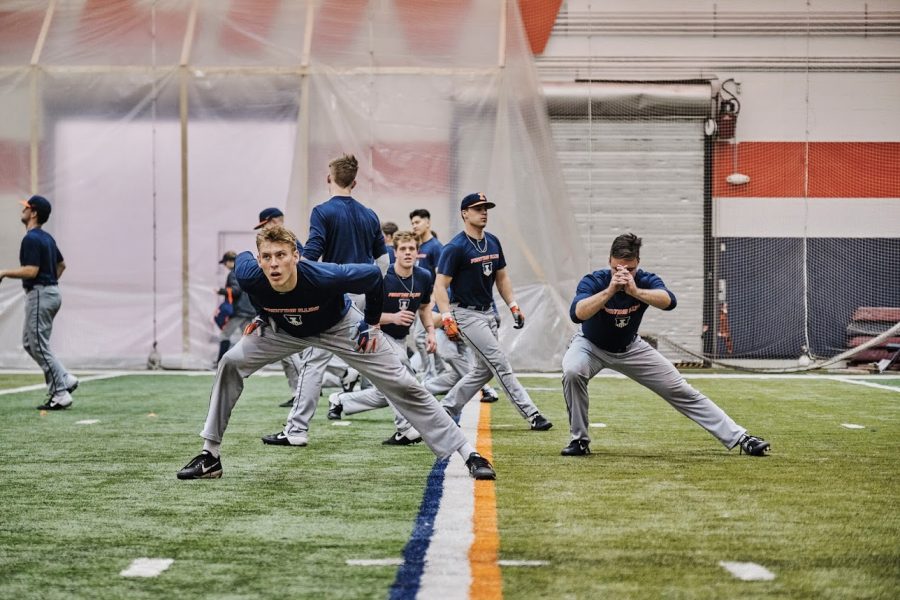 Illinois baseball team stretches during warm ups for indoor practice at the Irwin Indoor Practice Facility on Feb. 5. Illinois will open its 2020 campaign against Milwaukee in North Carolina Friday.

Illinois baseball is set to begin its three-game opening weekend on Friday in North Carolina. The Illini will play Milwaukee on Friday at 11 a.m, Seton Hall on Saturday at 9 a.m. and the host, Wake Forest, on Sunday at 1 p.m.

Of the four, Wake Forest is the only ranked team. D1Baseball ranks them at No. 18 while the USA Today Coaches Polls sets them at No. 24. The Illini begin their season unranked and are projected by Perfect Game to finish fourth in the Big Ten.

On Tuesday, the Illini announced on their Twitter account that senior Ty Weber will earn the opening-day start against Milwaukee. Weber, a right-handed pitcher, started 14 games in 2019 and finished with a 4-3 record and a 3.28 ERA.

Likely starters in the infield include redshirt sophomore Kellen Sarver at first base, freshmen Brody Harding or Xavier Watson at second, sophomore Branden Comia at third and sophomore Cam McDonald at third. The outfield positions are up for grabs, but junior transfer Taylor Jackson will most likely start at center field.

Milwaukee has yet to announce its starting pitcher. The Panthers graduated their top two pitchers last season — Jake Sommers and Jared Reklaitis. Junior Mike Edwards earned the second-most starts (11) as a sophomore last season and could be a likely starter.

The Panthers finished their 2019 campaign 35-21-1 and 18-11 in the Horizon League. Milwaukee came up short of a Horizon League title after losing 6-5 to University of Illinois at Chicago in the league’s championship game.

Seton Hall will be looking for a bounce-back year after finishing its 2019 season 25-28 and 9-9 in the Big East. The Pirates ended last season on a five-game losing streak.

Shedler-McAvoy and Toke were the Pirates’ top hitters last season with batting averages of .324 and .290, respectively. Both players were forces on defense — Shedler McAvoy did not commit an error in 2019 while Toke had just one.

The Illini offense will most likely face Thompson or Festa as both pitchers were top starters for Seton Hall last season. Thompson started a team-high 13 games and finished the season with a 4.20 ERA while Festa started 10 games and earned a 4.42 ERA.

Illinois will cap off the weekend with its toughest matchup against Wake Forest, who finished 31-26 and 14-16 in the ACC in 2019. The Demon Deacons are looking to make a run for the NCAA tournament after a two-year drought. The Deacons advanced to the NCAA Super Regional in 2017 after sweeping their NCAA Regional.

Wake Forest is returning the majority of their lineup, including two preseason All-American selections — junior first baseman Bobby Seymour and junior outfielder Chris Lanzilli. Seymour was the 2019 ACC Player of the Year as he batted .377, led the NCAA with 92 RBIs and led the ACC in hitting.

Two of Wake Forest’s starting pitchers, sophomore Ryan Cusick and junior Jared Shuster, have returned for the 2020 season. Both players started 12 games in 2019. Cusick went 7-3 with a 6.44 ERA while Shuster finished 4-4 with a 6.49 ERA.