Illini’s late-game skid turns into loss against No. 20 Hoosiers at home 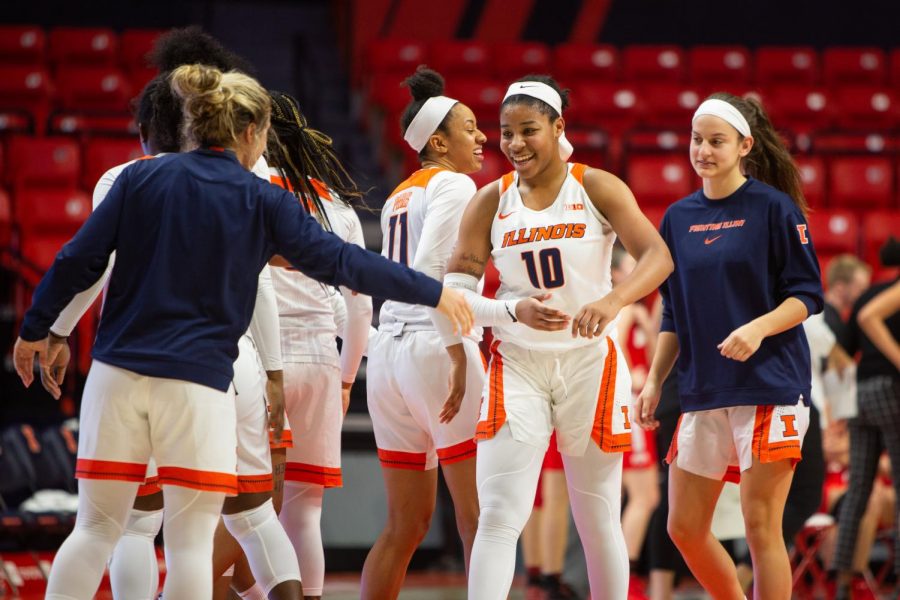 Freshman guard Jeanae Terry scored a career-high 15 points as Illinois lost to No. 20 Indiana, 57-51, Thursday at the State Farm Center.

Indiana forward Aleksa Gulbe made an early layup and Indiana took a quick 6-0 lead. Illinois got its first points 3.5 minutes into the game on a pair of Andrews free throws.

Terry also hit a pair of free throws and a layup to tie the game halfway through the opening period.

“We went out and played our butts off,” Terry said. “I know that I can knock shots down like that each game.”

At the media timeout, the teams were tied and fans enjoyed a “Parks and Rec” clip. After the timeout, Illinois and Indiana traded a pair of threes.

Senior forward Ali Andrews began the second with a three-pointer. Heading into the game, Andrews had 144 3-pointers at Illinois, and after the game was three 3-pointers away from hitting the 150 mark that junior guard Petra Holešínská hit Sunday.

The mood changed very rapidly in the State Farm Center during the end of the first half, as Holešínská picked up her second foul and Indiana went on a 6-0 run, prompting an Illinois timeout.

After the timeout, Beasley hit back-to-back 3-pointers and Illinois took a nine-point lead. Illinois’ nine-point lead was the largest lead any team had during the game.

However, Indiana jumped back into the game after it snapped its four-minute scoring drought. Illinois hadn’t made a shot for the last 4:40 of the second, but was able to maintain a narrow 27-25 lead at the half.

At the half, Andrews had 12 points and finished the game with 19. Indiana guard Ali Patberg led the Hoosiers with 10 points in the first half, and 17 on the evening.

“I was really proud of every single one of us,” Andrews said. “I want that W. I know we want that W.”

Illinois began the second half by losing its lead as Indiana went on a 9-0 run, prompting an Illinois timeout.

Andrews made another 3-pointer and a Holešínská layup cut the Illini’s deficit to 4 after the timeout. Illinois was tied in the closing minutes of the third quarter and entered the fourth down, 45-44.

Despite the close score, Indiana made 57.1% of its shots and Illinois made 42.9% during the third.

In the fourth, a Terry layup gave Illinois a 46-45 lead, which the Illini kept for a couple minutes until Indiana forward Brenna Wise hit a jumper to tie the game at 47-47 in the middle of the final period.

The game was very back-and-forth until Holešínská picked up a technical foul with 3:31 left. Indiana guard Jaelynn Penn made the two free throws and a Gulbe field goal gave Indiana a four-point lead and Illinois called timeout.

Indiana led 57-51 when Illinois called its last timeout with 28.1 seconds left on the clock. Terry hit a 3-pointer right away, but Indiana went on to win by 6.

“When we went to Indiana, we did not have a very good outing,” Fahey said. “That was a great 40 minutes, but (we) want to pick up the win.”