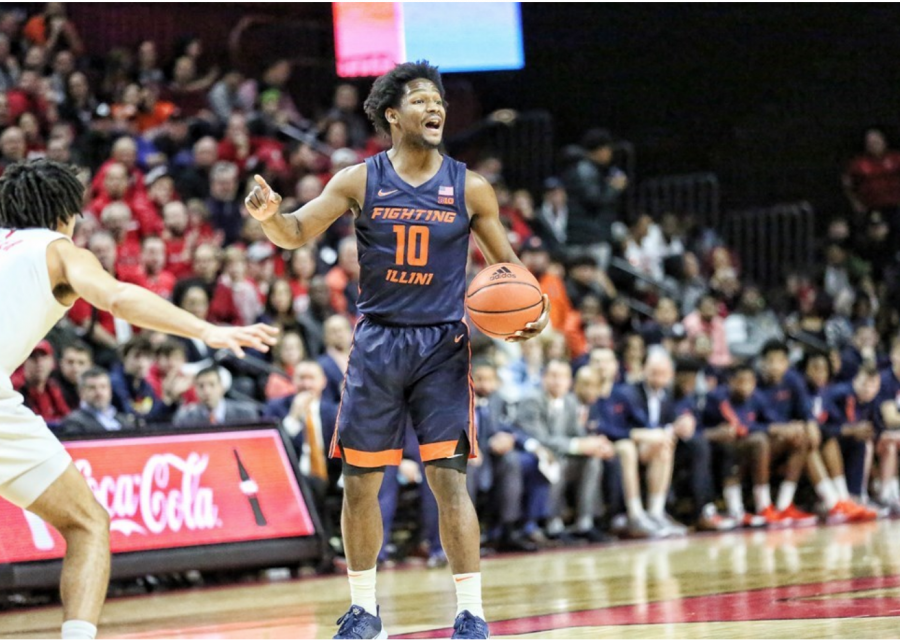 Without star sophomore guard Ayo Dosunmu, No. 22 Illinois faded down the stretch and fell, 72-57, at Rutgers, potentially ending the team’s five-week run in the Associated Press Top-25 rankings.

The forced change of senior Andrés Feliz for Dosunmu wasn’t the only modification in the lineup for head coach Brad Underwood, as he elected to bring sophomore forward Giorgi Bezhanishvili off the bench for the first time all season, favoring sophomore Alan Griffin and going small. Bezhanishvili has struggled as of late, registering just two points and no rebounds on 1-for-7 shooting in Tuesday’s 70-69 loss to Michigan State.

The teams traded baskets early on, but it was abundantly clear from the tip that Illinois was going to have a problem containing Rutgers’ Ron Harper Jr., as the sophomore went for 15 points in the first half on the way to a 27 point performance.

The last time the two teams met, neither team could buy a bucket, as Illinois shot its lowest percentage in a win in 40 years.

On Saturday, the Illini again couldn’t get anything to go in, but this time, the Scarlet Knights executed on offense.

Though Harper Jr. was the catalyst of the attack, standout junior guard Geo Baker put up 12 points and seven assists, while senior Akwasi Yeboah added 12 points and six rebounds.

Rutgers superb defense allowed the Scarlet Knights to open up an eight-point lead with 10 minutes to go, and from then on, they lulled the Illini to sleep, holding them to just 15 points from that point until the end of the game.

Without Dosunmu, Illinois needed more production from junior backcourt mate Trent Frazier. But the Wellington, Fla., native was woeful, shooting 2-for-13 from the floor including 1-for-9 from deep, scoring just nine points. Griffin led the way for the Illini with 14 points, and Feliz and freshman center Kofi Cockburn each joined him in double figures. But aside from that trio, the Illini were woeful. Sophomore Tevian Jones, who has earned a greater role as of late, took several ill-advised three-point shots early in the shot clock, shooting 2-for-7 and finishing with six points.

It’s hard to know what to take away from Saturday’s game because Dosunmu’s injury, along with Rutgers’ strong home form, were certainly working against Illinois, but the Illini were lethargic offensively, and Bezhanishvili’s confidence can’t be all that high after a benching and another game in single figures. One thing Saturday’s game made clear is that this team needs Dosunmu on the floor to be successful, but that’s hardly breaking news at this point. It’s an encouraging sign the sophomore made the trip out east, as he was seen cheering on his teammates in sweats Saturday afternoon.

Only time will tell whether or not the Illini can right the ship, but the schedule doesn’t get easier for Illinois, as they stay out east and will take on Penn State Tuesday night, with the Nittany Lions, playing arguably the best basketball in the conference this season.