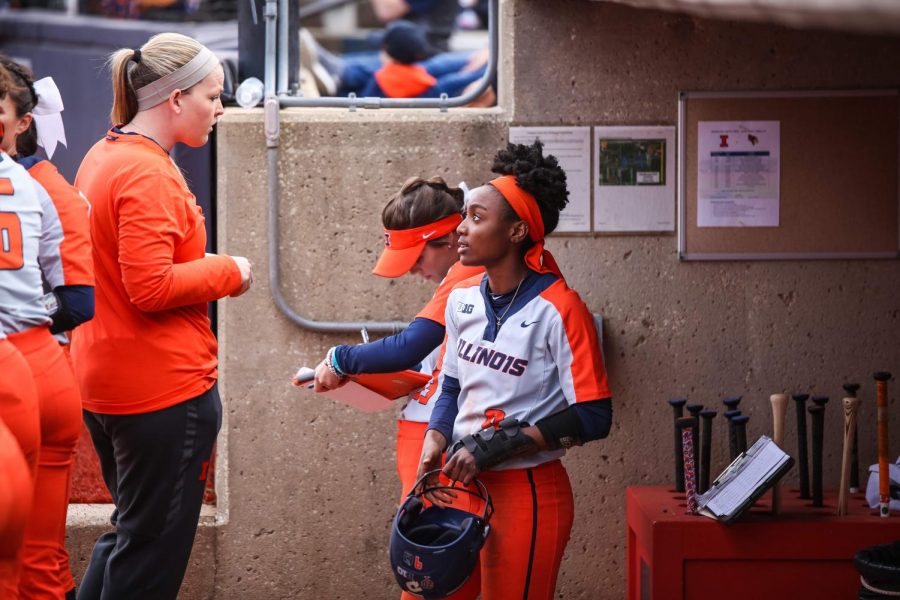 Sophomore outfielder Zaria Dunlap speaks with a team member on April 3. The team will travel down to Waco, Texas, for the Baylor Invitational Friday.

After the remarkable play and a 4-0 start last weekend at the National Fastpitch Coaches Association Classic, the Illinois softball team traveled down to Raleigh, North Carolina, for the Big Ten-ACC Challenge riding the momentum from its flawless start.

Illinois faced Notre Dame and North Carolina State but was torched due to subpar pitching and continued struggling on the plate, dropping to 4-3 on the season after a 4-0 start.

In the first game of the challenge on Friday night, the Illini sent out their ace sophomore Sidney Sickels, who pitched 15 and 2/3 scoreless innings in the NFCA. Sickels took on Notre Dame’s ace Alexis Holloway, who threw over 18 innings in the same tournament.

After a 1-2-3 opening inning from Holloway, the Irish got on Sickels quick, with an infield single followed by a stolen base to put the Irish in scoring position. After settling down with a groundout and a strikeout, Sickels gave up a two-out single to fellow sophomore Sophia Clark, which drove in a run to put the Irish up 1-0.

The game turned into a complete pitchers duel with Holloway taking the lead. While Sickels started to show off her potential, holding the Irish scoreless for the rest of the game, Holloway and the Irish defense didn’t give the Illini a lot of chances to get back in the game.

In the fifth inning, the Illini started to show signs of life, but miscues ended it quickly. After recording a leadoff hit, their first hit since the first inning, sophomore pinch-runner Zaria Dunlap was caught stealing second. The Illini had a second chance to tie the game after sophomore Danielle Davis walked and stole second. Still, that opportunity was thwarted when junior Maddison Demers was caught looking on the third strike to end the ending.

The Illini recorded one more hit in the final inning, but Holloway locked in after and secured a 1-0 victory for Notre Dame.

In Saturday’s first game of a doubleheader, the Irish again got out to a quick start with a run to take a 1-0 lead after the first inning.

After ten scoreless innings to start the Big Ten-ACC Challenge, the Illini got on the scoreboard in the fourth inning with sophomore Avrey Steiner, who doubled to start the inning, scoring on a fielder’s choice to tie the game at 1-1. Notre Dame pitcher Payton Tidd settled down and stopped the bleeding to head into the fifth inning tied.

Illinois’ momentum quickly vanished, however, with Notre Dame blitzing Illinois starting pitcher Addy Jarvis with three base runners on three at-bats. Facing Notre Dame senior infielder Katie Marino with the bases loaded with no out, the worst possible outcome occurred for Jarvis – a grand slam. As Marino rounded the bases, the Irish had skated out to a commanding 5-1 lead.

With Tidd holding the Illini bats in check for the rest of the game and the Irish tacking on another four runs in the seventh inning, Notre Dame walked away with an impressive 10-1 victory to complete the sweep over Illinois.

The Illini got right back a couple of hours later Saturday to face a new ACC foe, the Wolfpack of North Carolina State, who just completed a series sweep over the Ohio State Buckeyes.

The Illini bats started hot in the opening frame, with freshman Delaney Rummell connecting for a solo shot home run to give the Illini a quick 1-0 lead.

With Sickels on the mound despite having no days rest, the Wolfpack pounced quickly on her, answering back with their home run to tie the game at 1-1. The Wolfpack wasn’t done, though, with Tatayan Forbes scoring on a double Randi Farricker double to take the 2-1 lead heading into the second inning.

After going scoreless to start the second inning, Sickels gave up another walk and RBI double, and North Carolina State extended its lead to 3-1.

The Illini bats started to wake up in the fourth inning with back-to-back singles with only one out. The rally was short-lived, however, with Wolfpack pitcher Sydney Nester forcing a fielder’s choice and strikeout to get out of the jam.

In the next half-inning, the wheels fell off for the Illini, as the Wolfpack broke the game open with four unearned runs, capped off by a three-run double, to take a 7-1 lead and regain momentum.

The Illini cut the lead to five with another solo home run from Rummel. Still, Wolfpack closer Sam Gress took care of business in the seventh inning to end any chance of an Illini comeback, capping off a 7-2 victory to open the series.