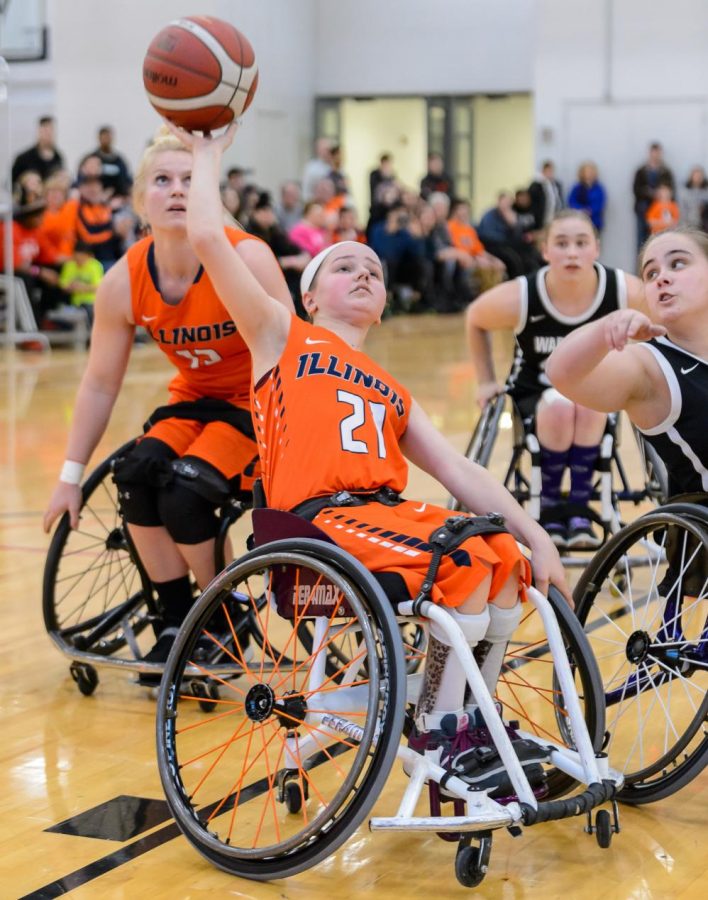 The Illinois wheelchair basketball team played its only home tournament of the season at the ARC Friday and Saturday.

Since the team seldom plays in Champaign, they cherished a weekend of playing in front of friends and family.

“It was really heartwarming (because) most of the time we’re on the road and we don’t get to see a lot of our fans,” said women’s wheelchair basketball player Riley Ljungdahl. “To have everyone come out, it means so much and shows that our sport really does affect the community.”

The women’s team played the University of Wisconsin-Whitewater twice Friday. In the first game, the Illini won 68-44. Friday’s second matchup against UW-Whitewater was the team’s Women in Sports game. National Women and Girls in Sports day was last week, but the Illini celebrated it Friday.

“Sporting opportunities for girls and women with disabilities are pretty small,” said women’s head coach Stephanie Wheeler. “We also wanted to honor all of the trailblazers that came before us here at the University. We have a really long history of women in sports on our campus.”

The Illini won the second game Friday 70-51. Saturday’s game was the third matchup between the Illini and the Warhawks of the weekend. The game was a close contest, with the Illini down by two points at the half. But late in the game, the Illini pulled away and won, 60-50.

Saturday, the men defeated Edinboro, 64-36, to start the second day of the tournament. The Illini honored military veterans Saturday night before their game against UW-Whitewater.

The Illini and the Warhawks have played each other several times this season and will play again in two weeks.

Head coach Matt Buchi said that while no veterans are currently on the Illini roster, veterans were instrumental in beginning the program.

“It’s difficult to play against somebody that knows so much of your tendencies,” Buchi said. “The Whitewater-Illinois rivalry has been a rivalry with each other for decades. It’s that (rivalry that) we know the Whitewater guys and Illinois guys (get along) with each other, but they battle each other every time.”

Despite the loss, Buchi enjoys having a tournament at home, especially with the band and cheerleaders in attendance.

“Playing at home is always great,” Buchi said. “They’ve been so amazing, to try to come into the ARC and make a real Illini experience for us. And I don’t know if the athletes fully understand the impact of what it feels like until they leave, and that’s what I really try to push on them is, ‘enjoy this, because this is something that’s really rare.’”