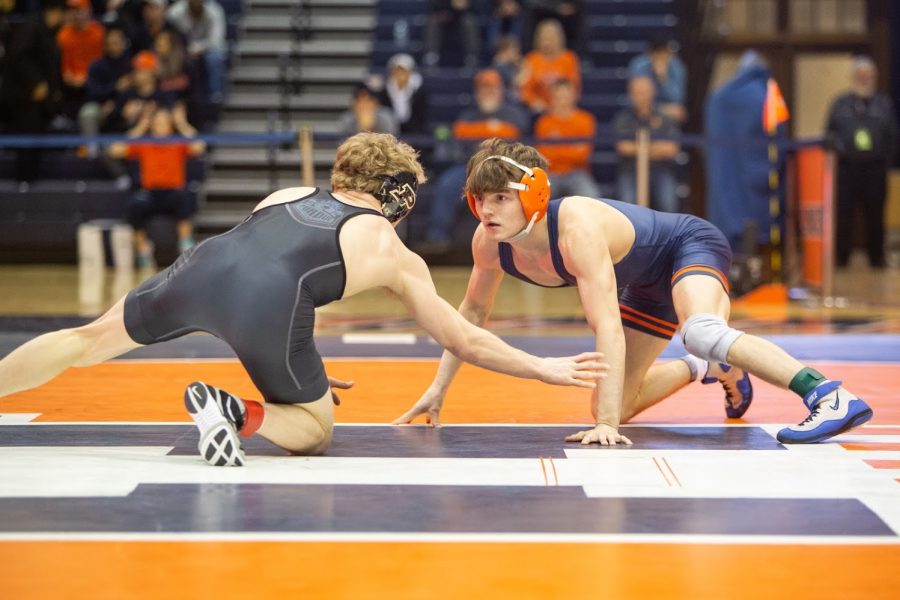 Justin Cardani wrestles against a Purdue opponent at Huff Hall on Sunday.

The No. 15 Illini wrestling team faced No. 8 Purdue on Sunday at Huff Hall, losing a close meet with a score of 18-14. Illinois victories came from seniors Travis Piotrowski and Eric Barone, redshirt-freshman Danny Braunagel and redshirt-sophomore Matt Wroblewski.

Piotrowski wrestled at 133-pounds against Travis Ford-Melton. He began the first period with a takedown and scored another point in the second for an escape. Piotrowski took his opponent down two more times to seal the score at 8-2. This was his 22nd victory this season and career-high for Piotrowski.

“From where I’ve started out and where I am now, it’s unbelievable,” Piotrowski said. “To see my progression and where I’m at now, it just shows me how much ground I’ve gained since being here at the University.”

At 157-pounds, Barone faced No. 6 Kendall Coleman. Barone was quick with the first takedown, implementing aggressive style from the start. He scored a point for an escape in the second period, followed by a riding-time point after a successful third period. Barone never let his opponent take him down, utilizing his flexibility at the end of the match to keep his lead over Coleman.

Braunagel competed in 165-pounds against Tanner Webster. In the first period, Braunagel took Webster down twice, entering the second period with a three-point lead. He took Webster down again, earning a two-point and a four-point near fall, bringing the score to 10-1 going into the final period. Braunagel scored two successive takedowns, sometimes scoring off of a failed takedown from his opponent, and earned another four-point near fall. This ended the match with 41 seconds remaining and a final score of 19-2 for a technical fall.

Wroblewski earned the final victory of the night for the Illini, at 197-pounds against Jared Florell. The first period had a successful takedown by Florell, but Wroblewski followed up with an escape. In the second, Wroblewski was able to hold Florell down the entire two minutes to avoid giving up a point. Wroblewski started in the down position for the third and escaped to earn himself point followed by a takedown to get the lead and win the match. With a point for riding time, the final score was 5-3 in favor of Wroblewski.

“Travis was solid as always. Danny Braunagel stepped up and scored bonus points when we needed them. Matt Wroblewski did a great job,” said head coach Jim Heffernan.

As the season comes closer to the end, Heffernan stays consistent with his team.

“Nothing changes,” Heffernan said. “All these matches are important for the season.”

Illinois will compete next against Fresno State in Huff Hall on Friday at 4 p.m.