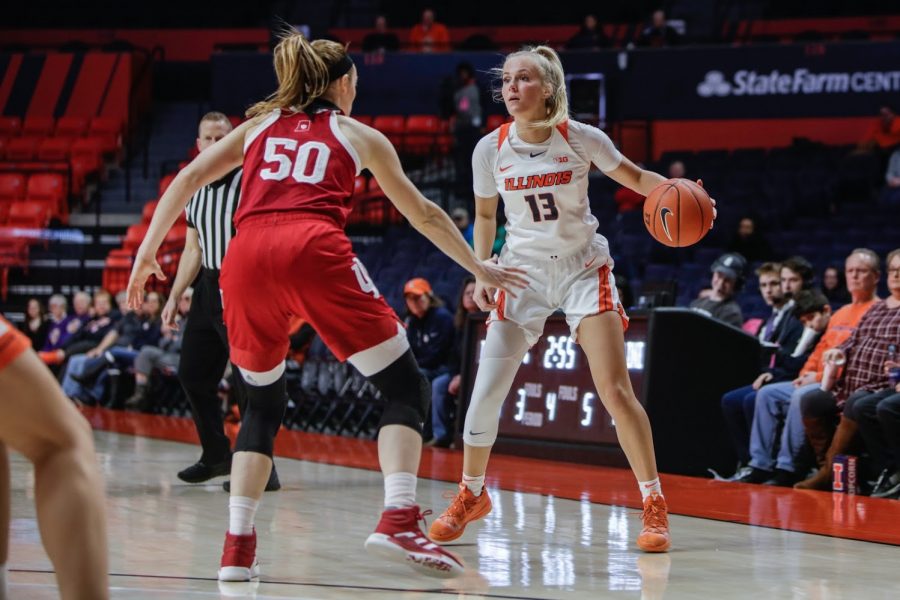 Petra Holešínská dribbles the ball against an Indiana defender at State Farm Center on Feb. 13.

The Illinois women’s basketball team is in Ann Arbor, Michigan, tonight to face the Michigan Wolverines at 6 p.m.

The Illini are coming off a 70-58 loss against the Purdue Boilermakers of Illinois’ Senior Day. Before the game started, the Illini honored the senior class, but once the game started, the Illini struggled to stop the Boilermaker’s big frontline. Purdue’s senior forward, Ae’Rianna Harris, picked apart Illinois’ interior defense to 16 points, 9 rebounds and a perfect 7-7 from the field. The Illini also struggled on the glass, where they were out rebounded 42-19.

Despite the loss, the Illini’s redshirt-junior, Petra Holešínská scored 18 points while making half her shots, including four 3-pointers. Holešínská continues to spark the Illini’s perimeter attack, and she credits her offseason.

“It’s just all the work you put in, especially before the season,” Holešínskás said. “You put a lot of shots up, and now, I’m just trying to keep it consistent.”

The Illini have yet to play Michigan this season, but the Wolverines are 16-9 on the season and 7-7 in conference play. The Wolverines are in the midst of a losing streak where they lost to Rutgers and Northwestern. In both those games, Michigan’s star forward, Naz Hillmon, struggled and was unable to reach double digit points.

Aside from the recent struggles, Hillmon has been vital for this Wolverines squad. On the season, she is averaging 16.6 points per game and 8.4 rebounds per game on 56.3 percent shooting from the field. Hillmon success has come strictly from inside the arc as she has not made a single three pointer this season, a testament to her success in the paint.

Illinois has struggled this year when defending big men due to a lack of size. If the Illini are going to win this game, they will need senior forward Ali Andrews and freshman forward Kennedi Myles to step up. Purdue carved up the pair in their last game, and the Illini were never able to stop the ball from going inside.

The Illini will also have to be aware of Michigan’s depth. The Wolverines have four players who average double figures scoring and two more, who average at least five points per game. Michigan’s success has come from their ability to spread the ball among the entire team.

Following Michigan, the Illini will head back to Lincoln, Nebraska, where they will face the Cornhuskers Saturday.